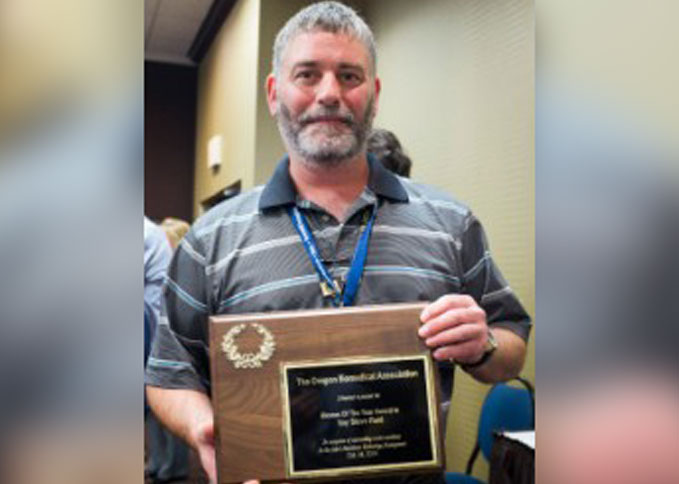 Professional of the Month: Steve Reid

Amidst the festivities, presenters and vendors, at the second annual conference of the Oregon Biomedical Association (OBA) in October, was the announcement of the Biomedical Engineering Technician of the Year. That honor went to an HTM professional who works for the Veterans Affairs Medical Center in Portland, Ore. In announcing the winner, OBA President Russ Magoon, CBET, MBA, said that Steve Reid “is regarded as one of the most technically savvy biomed equipment support specialists by his colleagues.”

“I didn’t even know I was nominated for it,” says Reid.

A lot of students, who have done internships at Reid’s facility, have gone on to be full-time biomeds. Reid suspects some of those students may have nominated him for the OBA award.

Reid, a biomedical engineering technician, is still fairly new to the profession, but he has made a positive impact on colleagues. He started out wanting to take his skill set further by learning to be a biomed. His entry into the field was after things began to transition to the high-tech state they are in today.

“I wanted to expand on my existing mechanical/electrical troubleshooting and repair background. Biomedical engineering was the perfect direction for me to go because the technology is always advancing and the challenge of networking these complex systems was something that I was very interested in taking on,” he says.

Earlier in his career, he had been a diesel mechanic, which is where he picked up skills in mechanical and electrical troubleshooting.

“I found biomed when I was going to college,” he says.

He started out pursuing radiology, but there was going to be a wait to get into a radiology program.

Completing one of the quintessential biomed degrees, Reid entered an internship program.

“I took care of my prerequisite classes at Clark College and Portland Community College between 2005-2007,” he says. “Upon completion of the prerequisites, I started the AAS Biomedical Engineering Program at Portland Community College between 2007-2009. I graduated with an AAS degree in Biomedical Engineering in the spring of 2009 and interned at the Portland VAMC until winter 2009.”

“I interned for awhile and then I went into volunteer status for a little bit while I was looking around,” he says. “Then, they did want to recruit me and I got hired about three months after that. There was about a nine month to a year period that I was here interning and volunteering.”

Recently, he took a spectrum photometer that hadn’t worked in years and was able to get it up and running without a manual or any instructions. The device will improve protein analysis and DNA for research.

The Portland VA, in affiliation with the Oregon Health and Science University (OHSU), operates the Northwest Veterans Affairs Cancer Research Center. Not only was Reid’s ability to repair the photometer useful to the research done there, but his ability to fabricate metal helps with research equipment. Funding for research from grants doesn’t always leave a lot of funding for equipment or parts.

Another project Reid helped with was connecting an Olympus BX40 microscope in the lab conference room to a large smart TV to allow pathologists to hold their tumor boards there and view slides with greater acuity. Previously, they had to use a CRT. He has also assisted with multiple networking projects.

“The activation of our new community-based clinics, that went from five to 10 thousand square feet up to 26,500 square feet, adding modalities and different services and networking,” Reid says.

One attribute of Reid that no doubt caught the attention of the Oregon Biomedical Association was his willingness to pay it forward as a mentor to some of the profession’s newest biomeds. In Magoon’s remarks about Reid at the OBA convention, he said; “He has championed the work study mentorship program at the Portland VA and has dedicated much of his valuable time instructing and building the skills of new biomeds.”

Passing those skills to the next generation of biomeds may be one of the more important things that an HTM professional can do.

“Students who come through, I try to mentor them; show them the ropes to see what real biomed work is like,” Reid says. “When the students are in the biomed classes, they always have a field trip and come up to the hospital. I will rip apart a dialysis machine and let them see what the inside of one looks like. I would be there doing PMs anyway. I still do it when they want to come by.”

Interns who have worked with Reid, and who went to school at Portland Community College, have ended up at hospitals in the area like St. Charles, Salem Hospital, Providence, OHSU and Legacy, according to Reid.

Away from work, Reid enjoys fishing, camping, cooking and gardening. He has a fiancée, two step-children and three children of his own. Reid is a U.S. Army veteran. He served from 1990 to 1996.

It may come as no surprise that Reid won biomed of the year honors. He sums up what TechNation readers should know about him this way; “Hard working, punctual, technical skills are sound and I enjoy mentoring students in the biomedical engineering program at one of our local colleges.” What more needs to be said?