Shifting Gears: Once Wore the Trident 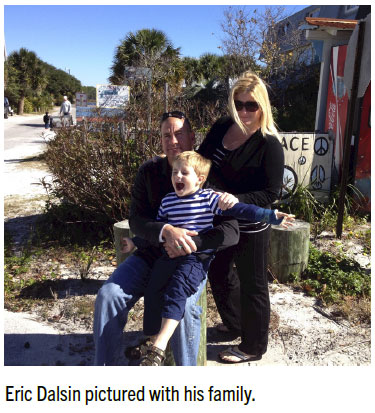 Challenges come in many forms and what we do with those challenges says a lot about our character and integrity.

Joining this team of elite warriors is not for the faint-of-heart or those willing to only make a partial commitment; it is an all-in proposition. The job can be inherently dangerous, and the price of admission requires a mental and physical fortitude that few possess.

For as many warriors who currently make up the SEAL (SEa, Air and Land) teams of today, there are countless retired or former SEALs who have gone on to work in other pursuits or who are enjoying a real retirement.

Eric Dalsin is a biomedical networking specialist in the clinical engineering department with the Southeast Louisiana Veterans Health Care System. Today, Dalsin is a biomed professional specializing in IT. Previously, he wore the Trident; the Special Warfare insignia of the Navy SEALs.

Dalsin remembers what led him to take on the challenge that so many others had to walk away from. In SEAL parlance; it is “ringing out.” This is the symbolic way that nearly 80 percent of those who enter BUD/S (Basic Underwater Demolition/SEAL) training decide they have had enough. The smaller number of trainees, who survive the portion of BUD/S known as “hell week,” go on to become members of one of the SEAL’s east or west coast teams.

It is far better for the instructors at BUD/S to break a trainee mentally or physically than to learn of a person’s limits during an important operation.

Dalsin grew up in Jackson, Mississippi and knew from the age of seven that he had a love for the water.

“I was seven years old when I first joined a local swim team in my hometown,” he says.

Growing up in a small town, he wanted to get out and see the world, so he joined the Navy.

“I joined the Navy in 1987 and immediately was off to Great Lakes, Illinois to begin boot camp. I then spent the next six months in Great Lakes, attending basic electricity and electronics training and advanced training for maintenance and repair on one of the Navy’s guided missile launching systems,” Dalsin says.

He says that after completing his initial training, he was assigned to a nuclear cruiser (USS Bainbridge CGN-25) homeported at Naval Station Norfolk in Norfolk, Virginia.

“While stationed onboard the USS Bainbridge, I volunteered to serve as one of the ship’s two search and rescue swimmers and completed search and rescue (SAR) training in Pensacola, Florida. After a few six-month long Mediterranean cruises, coupled with cruises to the North Atlantic and various places in the world, four years had gone by in an instant and I was ready to try something new,” Dalsin says.

Taking on the Challenge

His training and work in a submerged environment continued as Dalsin joined the Navy diver community.

“I re-enlisted to become a Navy diver, and was off to Panama City, Florida where I completed training at the U.S. Naval Diving and Salvage Training Center. My next assignment was on-board a submarine tender, (USS Emory S. Land AS-39) performing underwater repairs on submarines. While I very much enjoyed the work as a Navy Diver, after three years I volunteered to attend Basic Underwater Demolition/SEAL training (BUD/S) in Coronado, California,” he says.

Did Dalsin’s experience as a trained diver give him any advantage during BUD/S?

“I think being confident and comfortable in the water did have its advantages. But no matter how good of shape you’re in when you arrive at BUD/S, you will be broken down both mentally and physically; but being fit does allow one to recover more quickly than if you arrived out of shape,” he says.

After completing training, Dalsin spent the remainder of his time in the Navy assigned to SEAL Team 4 and SEAL Team 10.

“After returning from a deployment in Iraq on October 2007, I retired with 20 years of service in February 2008. I then moved to Gulfport, Mississippi, where I worked for two different private contracting companies responsible for delivering expeditionary combat skills training to active-duty military personnel. While working as a private contractor, I also attended classes at Tulane University as a full-time student where I earned a Bachelor of Science in information technology in 2013,” Dalsin says.

The challenges of being a Navy diver require a special skill set, but making the jump to one of the most demanding positions on the military is another story. What drove Dalsin to consider the SEALs?

“What initially drove me to want to be a SEAL was the challenge,” he says.

“I’ve always enjoyed challenging myself both physically and mentally — although I have slowed down since leaving active duty. When I was younger, I enjoyed challenging myself with running and swimming. I remember training for the Marine Corps Marathon in 1990; looking back on that I recall many days spent training outside my comfort zone. I’ve always felt that working outside your comfort zone can be rewarding in many different ways,” Dalsin says.

He says that one of the most enjoyable elements of working on the SEAL teams was that the camaraderie and teamwork are second to none.

“Amazing things can be accomplished when a group of professionals are working towards the same goal; whatever that goal may be,” Dalsin says.

He says that one of the qualities of a SEAL is a stubbornness not to quit, not to give up; not to fail is a requirement.

“BUD/S definitely pushes a person to the edge and beyond; sometimes that stubbornness is all you have left to keep you going,” Dalsin adds.

The next phase of his career brought much different challenges.

“I was hired by the New Orleans VA in 2016 as an electronics technician, and in 2019 a position as a BESS/IS became available, which is the position I am currently working in. I really enjoy my current position with the VA; the duties I perform are challenging and being able to enhance the service provided to other vets is extremely rewarding,” Dalsin says.

Has the SEAL training helped with his post-military career?

“I think a can-do attitude is helpful in any environment/situation,” he says.

Dalsin remains serving his country by helping out his fellow vets. The work of a BESS/IS may bring its own challenges, but they are less mentally and physically taxing than the work of a Navy SEAL.

For those who have worn the Trident, the saying goes: “the only easy day was yesterday.”