Posted By: K. Richard Douglason: February 01, 2017In: Magazine, Professional of the Month, Spotlight

We work most of our lives with an eye on that golden watch. There will be a day when we can sleep in and not set an alarm. Although few actually get a gold watch anymore, the thought of taking it easy for awhile is a nice thought. John Jetchick, CBET, a senior technology manager with Aramark, works at Swedish Medical Center in Englewood, Colorado and has spent more than 40 years in the HTM profession. He is now making the transition into the life of a retiree. 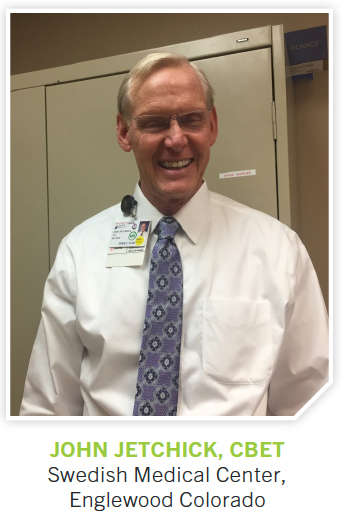 Jetchick’s accomplishments and contributions to his department and the HTM field have not gone unnoticed.

“He is a notable gentleman and professional in the field, especially in Colorado. A lifetime honored member of CABMET, former military-biomed instructor and veteran, John Jetchick is recognized by HTM and health care professionals throughout the area for his sincere warmth, great sense of humor and his passion for the field. He has fostered and supported mine, and countless others, careers,” says Dustin Telford, CHTM, CBET, CRES, CLES, supervisor in the Biomedical Department at Swedish Medical Center.

Jetchick got his biomed career started in the Great Lakes state, growing up in Livonia, Michigan. The draft slightly detoured his plans.

“I was introduced to biomed by a counselor at what was then Schoolcraft Community College in Livonia. He suggested I give it a try. I took some classes and enjoyed it,” Jetchick says. “Before I was able to complete the program, I was drafted into the Army. I met with a recruiter and found out the Army had a biomed program. I signed up for it and, after basic training, reported to Fitzsimons Army Medical Center in Denver for the basic course.”

While in the Army, Jetchick became an instructor at the Medical Equipment and Optical School (USAMEOS).

“Before I graduated from the short course, the warrant officer in charge asked me if I wanted to stay and become an instructor,” he remembers. “My wife and I really liked Denver, so I said yes. The program was taught in phases. I would sit in on the lectures, as a student in one phase, then be an instructor in another phase I had already completed. I again became an instructor after completing the long course.”

After two enlistments, Jetchick transitioned to the civilian world. His first job was selling respiratory therapy supplies for a small company in Colorado.

“I discovered I was a terrible sales rep,” he admits “A former instructor from Fitzsimons, Mike O’Brien, was in charge of the biomed program at Hospital Shared Services in Denver. He hired me and I started in 1979. I moved up the technician ranks over the next several years. In 1996, I joined GE as a senior tech. I was promoted to Senior Program Coordinator; my first salaried position. In 2010, I joined Aramark Healthcare Technologies as a Technology Manager. My current title with Aramark is Senior Technology Manager.”

Jetchick has been at Swedish Medical Center for 22 years, having been with GE for 14 years before joining Aramark. 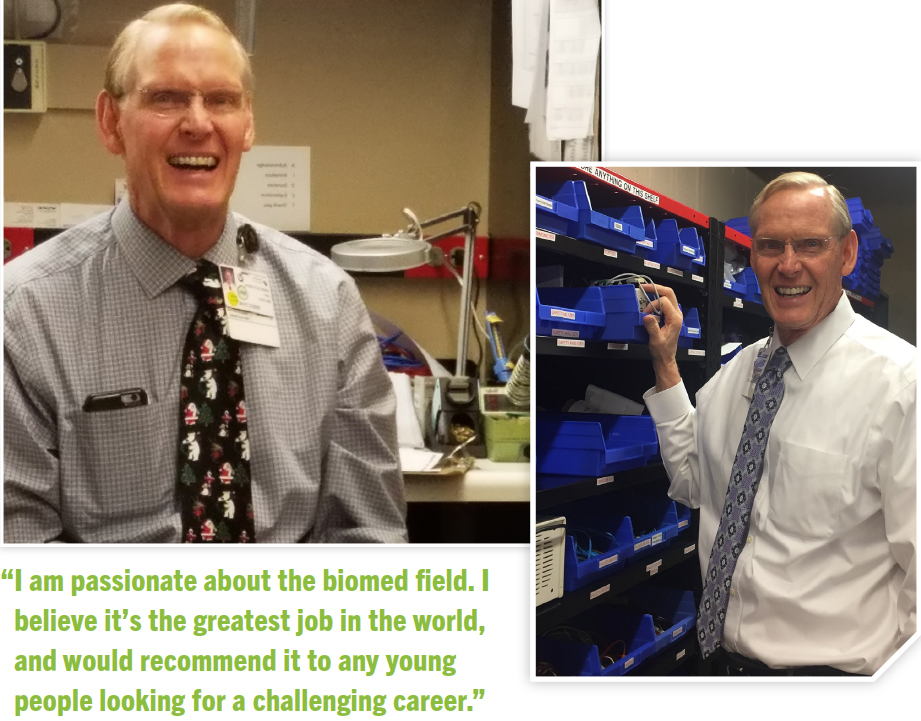 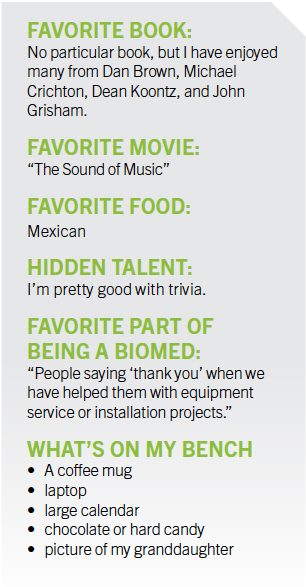 Asked about any challenges during his career, Jetchick points to a recent project and one from the past.

“This past year, I oversaw the replacement of the hospital’s telemetry system. I was asked to make all decisions on the project, including the number of telemetry transceivers for each department, and the setup of the tele tech monitoring area. At the same time, we were opening two new floors with a total of 40 beds, so my days were definitely extended,” he says.

“Several years ago, I oversaw the transfer of equipment from a hospital that was closing, to one that was expanding. The equipment moves had to be timed perfectly in order to have the equipment operational before the patients arrived in their new beds,” Jetchick says.

Asked about any awards or positions held within the HTM field, Jetchick recalls several.

“As for awards, I was awarded soldier of the year at Fitzsimons Army Medical Center in 1976,” Jetchick says. “I won a ‘Best of the Best’ award with GE. I am a lifetime member of CABMET, the local biomed society in Colorado, and was once its president.”

Away from the job, he has enjoyed hitting the links. “Golf is my main hobby. I also enjoy organizing events, such as a church festival or classic car show,” he says.

His family is important to him. He and his wife, Gayle, have a daughter, son-in-law and granddaughter in California.

Jetchick leaves a field that he ardently supports.

“I am passionate about the biomed field. I believe it’s the greatest job in the world, and would recommend it to any young people looking for a challenging career,” he says.

Those young people would find a good role model in Jetchick. With people like him retiring, the field has some big shoes to fill. Jetchick says that he might “kick back” for a short while, but he believes he might keep busy in retirement. His wife is the executive director of a business improvement district in Aurora, Colorado. Jetchick has already done some volunteer work to help his wife and will most likely continue to volunteer and keep the business owners happy.

Since he has been a biomed for over 40 years in total, there is a likelihood that he will also continue to contribute to the field.