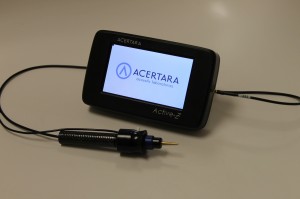 Acertara Acoustic Laboratories, an ISO17025:2005 accredited and ISO9001:2008 and ISO13485:2003 certified ultrasound facility, has announced that its newest ultrasound probe testing device has received the CE mark allowing it to be sold within the European Union.

Active-Z is a low-cost, hand-held ultrasound probe testing device that provides biomedical engineering professionals with a point-of-measurement tool to rapidly and easily diagnose a suspected defective probe. Using a proprietary technique, a broadband signal is transmitted through a patent-pending stylus into individual pins of the probe connector; Active- Z then receives the returning signal through the stylus and measures the resultant complex impedance of the connection between the probe connector and the acoustic stack within the probe housing. This technique allows the user to determine where a potential problem exists.

“Active-Z represents a new way to analyze the performance of an ultrasound probe and get to the diagnosis of the failure quickly,” said Acertara President and CEO G. Wayne Moore. “About the size of a smartphone, Active-Z is designed to be a low-cost, point-of-measurement device that could be easily carried by the engineer to the ultrasound laboratory within the hospital for probe testing. Our design and development team – who invented FirstCall, The Nickel, and Aureon – has a long history of developing new and innovative ultrasound test devices. Active-Z represents an exciting continuation of that legacy and with the CE mark allows those in the EU to obtain this valuable testing tool.”