Posted By: K. Richard Douglason: August 01, 2017In: Magazine, Professional of the Month, Spotlight 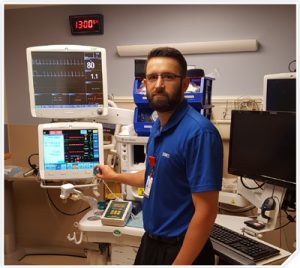 Outside of Grand Rapids, Michigan, near the shoreline of Lake Michigan, sits the city of Holland, Michigan. Holland is a picturesque town known for its fields of springtime tulips, parks and proximity to the water. It is nestled along the shores of Lake Michigan and Lake Macatawa. The city got its name from the many Dutch immigrants who settled there beginning in the mid-1800s. The health care needs of the residents is provided, in part, by Holland Hospital.

Holland Hospital has recently celebrated its centennial, having opened its doors in 1917. The independent, not-for-profit hospital serves the 250,000 residents of Ottawa and Allegan counties on the west side of Michigan. The hospital is a Truven’s Top 100 Hospital and, for the past three years, has been recognized as one of America’s 50 Best Hospitals by Healthgrades.

Anthony Hickerty works for Aramark as a BMET II at Holland Hospital. Hickerty’s interest in both mechanical and electrical work attracted him to the field.

“My first interest actually came from my electronic technician background. I was working for a hospital in the warehouse while looking for a tech job. The manager of biomed asked if I would be interested in repairing a few small items like wheelchairs and stretchers after hours volunteering. My mechanical side loved this and over time I was able to see the electronic equipment being repaired and that was when I knew I wanted to become a biomed engineer,” Hickerty says.

“In the beginning it was all volunteer work, after working eight hours a day in the warehouse – all hands-on, service manuals and supervision from the manager. During this time, I left the warehouse full-time job to work part time in the biomed department as the equipment distribution person and also went to school part time,” Hickerty says.

He says that the position put him ahead of the curve because he was able to see the equipment and watch the techs work on it as well as see the inner workings of a biomed department.

“After three years of part-time schooling, I graduated from Muskegon Community College with an associate degree in biomedical engineering. Now, I work for Aramark as a BMET II at Holland Hospital,” he adds.

Hickerty says that when you work on a small biomed team, knowing as much as you can helps.

“Surgery and CS are my main focus along with networking and any PC related issues. We have four techs and one ISE here, so knowing all the equipment is almost a requirement,” Hickerty says.
Challenges, Pastimes and a Great Job

In the special projects and challenges categories, Hickerty has had some experience with both. Whether device integration or constructing a useful tool for clinicians, he says it’s all good.

“The most fun project I have created was using a quadplex video device to put four screens onto a large TV so that the nurses and doctors would be able to view patients in four separate locations as opposed to placing four screens at each location along with all the cables and wires needed for this,” Hickerty says.

He adds that programming each Global Unique Identifier Device (GUID) to each medical device, along with making sure data was flowing to each device, to the backbone, and then to the program that the nurses and doctors use, is also a challenge.

“Overall this project was huge, but in the end it was all worth it as it saves the staff so much time and energy,” Hickerty says.

Away from work, Hickerty enjoys forging using a homemade forge. He normally works with aluminum and has dice molds. To save space, he creates aluminum bars from all of his scrap metal.

He recently became a dad and now has a family of three. He says he has been “married for five years this September to my best friend. Just had a baby boy in April; being a new father is a wonderful experience.”

The old adage that says if you love your job, you will never work a day in your life, applies to Hickerty. That appreciation extends to those he has the opportunity to work with also.

“I love what I do and this ‘job’ never really feels like a job. I work on different pieces of equipment every day and new challenges are around almost every corner, but that is what makes this job fun,” he says. “The team I work with is also top notch; they never hesitate to help if needed and are always eager to learn. I could not ask for a better team.”

The patients at Holland Hospital can rest assured that they have a devoted biomed team behind the scenes and one new dad who is grateful to help.