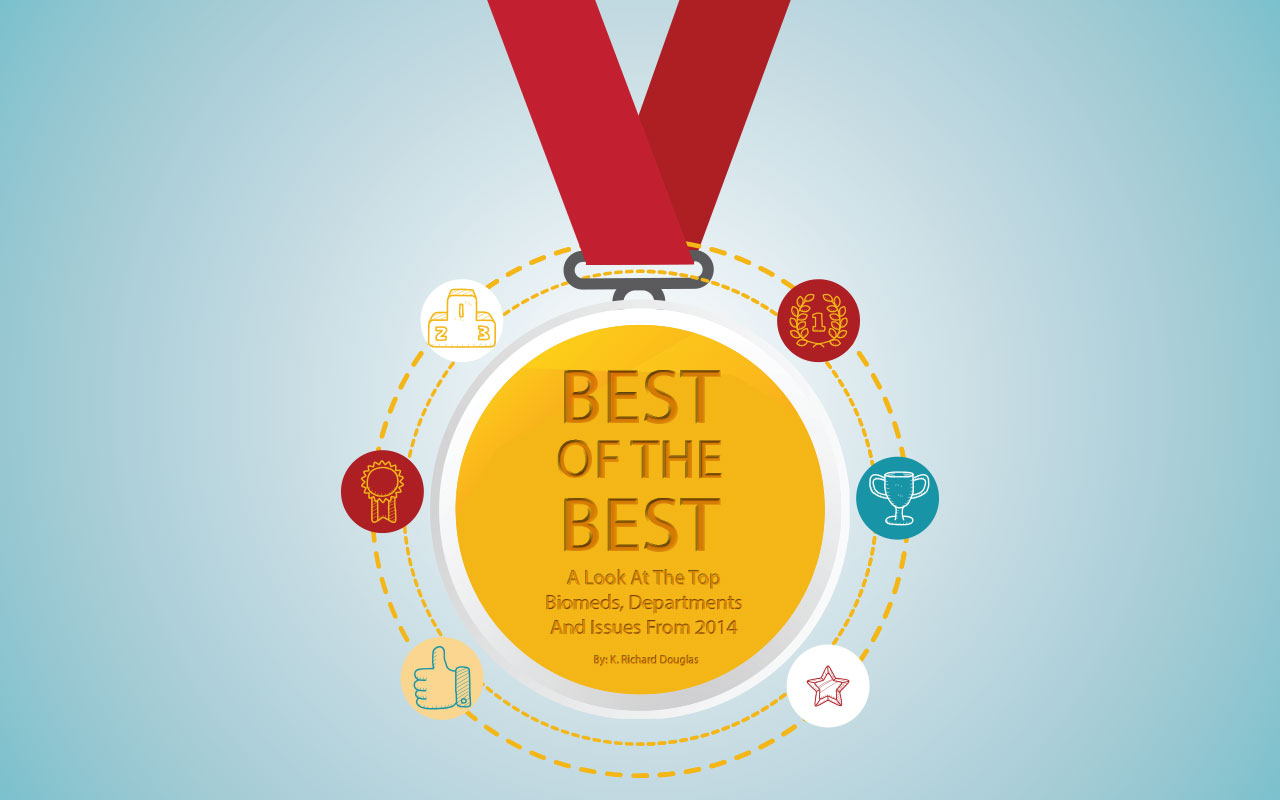 Best of the Best

Throughout the year, TechNation shines a spotlight on the good work that is done by HTM professionals and their departments. To wrap up the year, TechNation takes a look back at some of those individuals and departments who were featured throughout the year. In the year ahead, TechNation will shine the spotlight of recognition on many more HTM professionals and departments as they contribute to patient safety and patient recovery and are at the core of the nation’s healthcare system.

TechNation will also hit on some of the highlights of the year that affect HTM professionals.

In some studies of employees, it is the more intangible rewards that motivate people and make them enjoy their work. The HTM profession is not excluded from this reality.

Without HTM professionals, medical technology would be useless. There could not be healing without the contributions of HTM professionals. Recognizing and spotlighting the important work of biomeds and clinical engineers ensures that those professionals get the attention they deserve.

In addition to the positive impact of HTM professionals during 2014, there were other events, products and regulations worth mentioning. Safer connectors, cybersecurity and a ruling on power strips were all big news items for HTM professionals and healthcare providers.

Also during the year, AAMI continued to work on its Career Ladder project. And, the TechNation Webinar Wednesday program saw real success. The MD Expo Orlando broke attendance records and an exchange for imaging professionals was launched at the first-ever Imaging Expo.

In an article called “The Ten Ironies of Motivation,” from 1999, author Bob Nelson stated; “Study after study has shown that praise and recognition motivates employees to put forth their best efforts and to perform at higher levels.” Many studies support this contention and point out that recognition and praise are very important to employees. While people expect to be compensated for the work they do, it is recognition for that work, and achievements on the job, that are truly meaningful to every working person.

People want to be noticed for doing good work. While hospitals and healthcare systems have found ways to recognize the achievements of their employees, publications can carry that appreciation to a national audience of the employee’s peers. 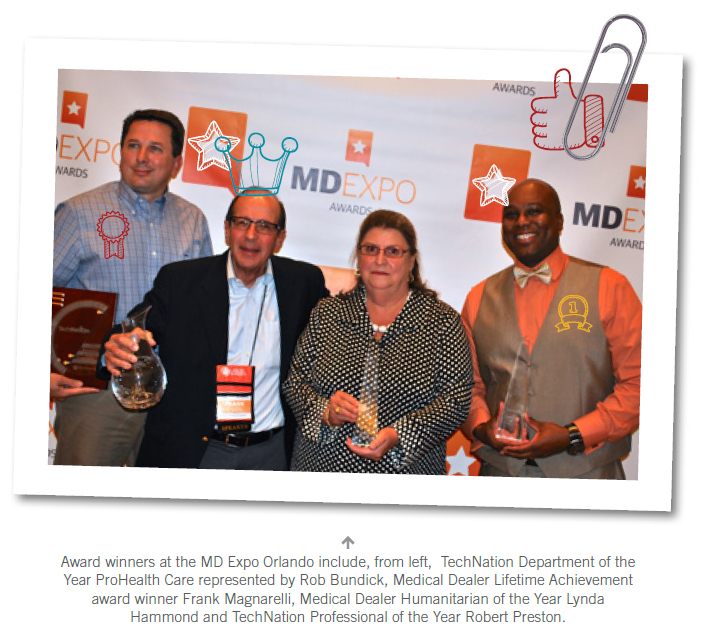 Professional of the Year

Robert Preston, CBET, A+, lead technician at St. Anthony Hospital, was featured as a Professional of the Month in TechNation. Preston is a good example of the people nominated by their peers; a biomed who has met challenges, a former officer in his biomed association and a former U.S. Army biomed who also volunteers his time to help others.

One of the early graduates of tri-service biomed training at Sheppard Air Force Base, Preston benefited from the program’s intense curriculum.

Like many of his HTM colleagues around the country, Preston had the experience of setting up a new hospital. He helped his department parse the difficult task of determining vendors for equipment. Also, as a former vice president and secretary for the Colorado Association of Biomedical Equipment Technicians (CABMET), Preston was the go-to guy for the group’s annual symposium. A fellow CABMET member, Dave Scott, said; “He helped make the CABMET Symposium what it is today. He would always say, ‘Next year is going to be even better.’ ”

Preston was also featured in March 2014 for his volunteer work in Vietnam that included setting up medical equipment at Bach Mai Hospital in Saigon and coordinating a symposium to train biomeds in Vietnam.

At the fall MD Expo in Orlando, Fla., Preston was presented with the TechNation Professional of the Year award.

Department of the Year

It takes a group of HTM professionals to make a department. Sometimes, there will be some ancillary people to help with administration. Departments have been nominated for a number of reasons; they have great protocols and procedures, have tackled some big projects successfully or find ways to serve their customers in an exemplarily fashion. Many are innovation leaders as well.

The department went through a big transition in 2007, merging biomed groups from two hospitals and trying to make it all work right.

Colleagues and clinicians say that the department is collaborative and provides good coverage. They are seen as a key part of the organization and deserving of recognition. The department’s manager, Rob Bundick, more recently helped out with a TechNation cover story about asset tracking in which he shared his department’s experiences.

The members of the department were recognized at the MD Expo Orlando in front of their peers as the TechNation Department of the Year.

For those working with imaging modalities, there was the introduction of the Imaging Community Exchange (ICE) at the first-ever MD Imaging Expo in Indianapolis this past summer.

The Imaging Community Exchange, a web portal that brings together imaging professionals, provides a community exchange. It offers useful information, industry news, a community forum and career advice. The many benefits of sharing knowledge and networking, a service that the Internet performs so well, can be fully utilized through the website www.ImagingIgloo.com.

The exchange can also pair prospective job seekers with openings in healthcare systems across the country.

The MD Imaging Expo exceeded expectations with stellar reviews from industry leaders and a strong showing from throughout the United States. More than 200 attendees registered for the inaugural event held at the JW Marriott in Indianapolis. The Imaging Expo was created in response to a demand for a specialized conference on medical imaging. Attendees were treated to world-class speakers and exhibitors.

The inaugural Imaging Expo featured 46 booths and sold out more than a month before the summer showcase. Hundreds of attendees benefitted from educational opportunities with a variety of ASRT-certified classes.

MD Publishing President John Krieg announced earlier this year that the second annual Imaging Expo is set for July 22-24, 2015, at the JW Marriott in downtown Indianapolis.

The MD Expo spring show was held in Las Vegas in April 2014 and crushed attendance records. There were more than 350 attendees and more than 100 vendors with 275 exhibitor personnel. The three-day event combined work and educational sessions with social networking opportunities.

The 2014 MD Expo Orlando was a runaway success with a record number of attendees. With 118 companies exhibiting and 468 registered attendees, the show broke previous records. The opportunities to learn and earn credit for continuing education reflected the professionalism of those in the HTM community. In partnership with the Florida Biomedical Society, the show’s number of vendors also reflected their commitment and respect for the profession.

In addition to the recognition for the professional and department of the year honorees, the event honored the recipients of the Medical Dealer Humanitarian of the Year and Medical Dealer Lifetime Achievement awards. Lynda A. Hammond from ATS Laboratories was presented with the humanitarian award. Frank Magnarelli received the lifetime achievement award. 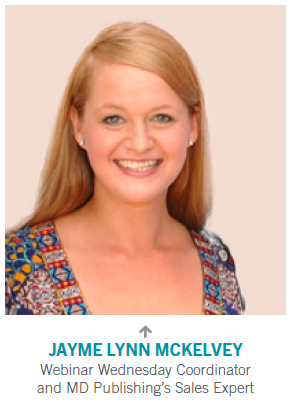 Another successful TechNation undertaking in 2014 is the Webinar Wednesday series. Enthusiasm for the sponsored learning tool took off and participation grew.

“We sought ASRT certification for the webinars to help HTM professionals with their continuing education requirements. Our plan was to have one webinar a month, but by April, the events had become so popular with the TechNation community and advertisers that we grew the schedule to include two to three webinars monthly,” she says.

McKelvey says that through the first three weeks of October, the webinar series has seen 1,932 attendees, or an average attendance of 138 per webinar.

“Overall, TechNation’s free, ASRT-certified, monthly Webinar Wednesday series has far exceeded my expectations,” McKelvey adds. “Due to its success, we started a similar series for our OR Today community in September, and we are already scheduling webinars for 2015 with leading companies in the medical equipment industry. I am truly excited to see what 2015 has in store for Webinar Wednesday.” 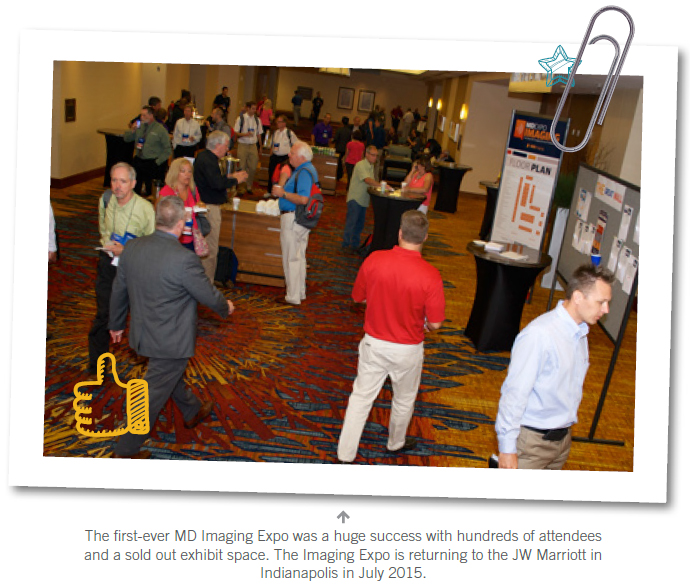 Major news items from 2014 included AAMI’s Career Ladder, a focus on cybersecurity, power strips and more. These will continue to be important topics in 2015 and beyond.

AAMI’s Career Ladder provides guidance for HTM professionals. The organization has developed a framework that spells out the “knowledge, skills and experience needed for BMETs and clinical engineers.” The career development program will create career ladders that will aid HTM professionals in acquiring the right education and experience.

Guidebooks will outline the roadmap needed by HTM professionals to “grow their skills and advance their careers,” according to AAMI News. A guide for HTM leadership is also in the works.

HIMSS introduced a new certificate program for HTM professionals during 2014. The certification is designed for those newer to the HTM profession, specifically those with less than six years of experience. It is the Certified Associate in Healthcare Information and Management Systems (CAHIMS) and clearly reinforces the direction the field is headed.

The certification “demonstrates knowledge of health IT and management systems,” according to HIMSS.

It can act as a pathway to the CPHIMS credential for those seeking this certification. The CPHIMS certification provides an international standard for professionals in healthcare information and management systems. Both certifications require passing an exam.

HTM professionals, like their clinical counterparts, are forever focused on the acronym HIPAA. The 1996 law laid out a framework for information privacy in healthcare. By extending protections for patients’ in the form of restricted access to their health information, HIPAA spelled out several safeguards that must be followed.

During 2014, we were reminded that administering the requirements would be extra challenging in the face of several highly publicized security breaches at major retail and banking institutions. Cybersecurity has become a battle between cybersecurity experts and cyber criminals, with consumers and patients as unwitting victims. Reported breaches at J.P. Morgan Chase, Wal-Mart, Target, Apple and Home Depot made national news and affected millions of people.

The infrastructure of networks, and the securing of data in medical devices, has been a major focus in the HTM community in light of these threats. EMRs must be protected. Complying with HIPAA to prevent medical identity theft benefits patients and healthcare institutions. A major health system and the government’s own HealthCare.gov website were both breached during the year, serving as a reminder that the healthcare sector is a target.

Some clarification and leeway was provided by CMS with regard to power strips in September. The use of relocatable power taps (RPTs), or power strips, in patient areas, as defined in the National Fire Protection Association (NFPA) 101 Life Safety Code (LSC) in 2000, could create unreasonable hardship according to CMS. A waiver allows for liberal use of power strips as long as they meet code, are regularly maintained and that they be used only for medical devices. Certain requirements related to ampacity are also noted in the waiver.

There will be big changes in 2015 that relate to connectors. Accidental misconnections of enteral feeding and other tubing to intravenous systems have had catastrophic results and have led to numerous deaths. The FDA notes that the prevalence of this problem is most likely underreported.

As a result, AAMI, the International Organization for Standardization and other groups have worked on “a suite of tubing connector standards.”

According to AAMI, standards for enteral connectors will be rolled out first in early 2015.