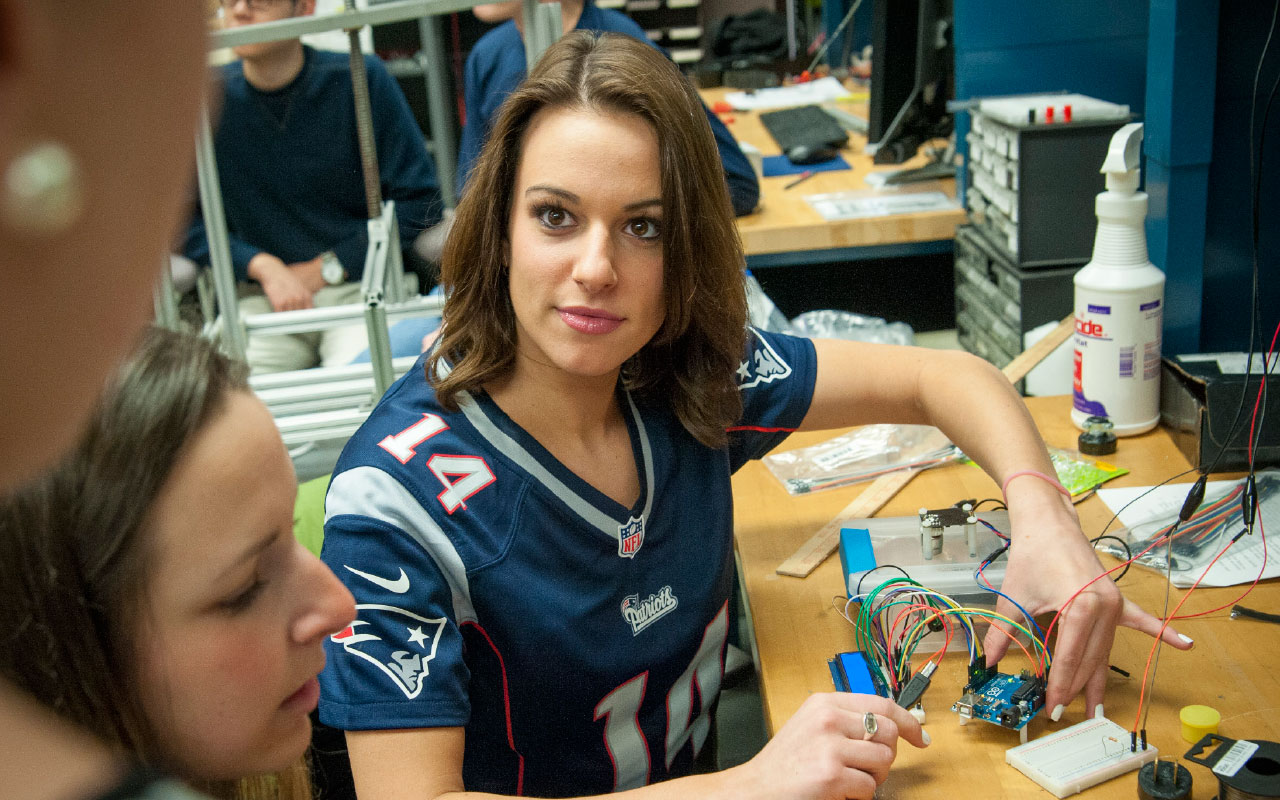 There it was, under the clear blue skies and 70 degree temperatures at the University of Phoenix stadium in Glendale, Arizona; the start of Super Bowl XLIX. With the retractable roof open, the players, fans, national and international media were preparing to watch and participate in the historic event. As the Seattle Seahawks and New England Patriots took to the field, one HTM student was among the spectators.

She wasn’t in the stands and she wasn’t in a suite. She wasn’t even one of the eager fans who dished out four or five or even seven thousand dollars for a ticket. She was on the sidelines holding a pair of pom-poms.

In front of more than 70,000 fans in the stadium that day and 100 million more watching the game on TV, were the players on both teams and their respective cheer squads. The HTM profession was represented on the New England side of the field.

Alyssa Merkle is a professional cheerleader for the New England Patriots. She is also a clinical engineering student at the University of Connecticut. Merkle has nearly a 3.8 grade point average and will graduate in May.

Choosing Hartford Hospital, and shadowing a current student who was interning there, Merkle decided to learn more by volunteering over the summer.

“After my summer with the department, I knew I was very interested in the type of work I had done all summer and that I wanted to try and pursue clinical engineering as a career starting with applying for the masters program here at UConn.”

“I selected the program at UConn for a few reasons,” Merkle adds. “I knew the school had a good reputation for its engineering school, which was important to me. I also knew they had a five-year BME masters 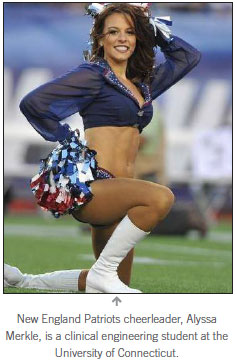 program, which was intriguing to me when I was choosing schools.”

Merkle also tried out for UConn’s dance team and made the squad. That had really cinched her decision.

“I graduate in May of 2015 and would go directly into graduate school. If I make it into the clinical engineering program, I will be in school and working in a hospital for two more years and then will start pursuing a career at a hospital shortly after,” she explains.

Working at the hospital brought about many experiences that gave Merkle a sense for the HTM field.

“My large project of the summer was a blood pressure cuff build and roll up,” she says. “We built about 30 per week and would roll them up to every single patient room in the hospital. This was my favorite project as I got to see the work flow of the whole hospital as well as interact with patients and see just how our help really controls their safety within the hospital.”

It was the dance team at UConn that had something to do with entry into professional cheerleading.

“I got to school freshman year and started getting more into football with the people that lived in my dorm building,” she says. “I also had a friend whose step-mom was previously a Patriots cheerleader. I was intrigued by the whole thing, so when a girl on my dance team asked if I would go with her to tryouts, I jumped at the opportunity.”

“I started working really hard to get myself physically and mentally in the mindset to tryout and then I just went for it and wound up making the team,” she adds.

While managing volunteer work, school studies and NFL cheerleading practice might seem like a real challenge, Merkle says she fits it all in because it is all important to her and she loves what she does.

In the National Spotlight

Many people would be happy with their own 15 minutes of fame. Biomed Adventures may fit the bill for many, but Merkle has already seen those 15 minutes in spades.

“The whole Super Bowl weekend was completely surreal to me,” she says. “I loved every single second of it. From the minute we got there, we were treated like we were really something special and that was a cool feeling. Just being able to promote our football team and ourselves in such a highly watched way was something to be proud of.”

Cheering in front of the crowds at Gillette Stadium is one thing for a Patriots’ cheerleader, but what comes with Super Bowl participation is a whole different thing.

“Being able to be a part of things like the ‘Today’ show, ‘Good Morning America,’ ‘E,’ ‘Access Hollywood,’ the ‘Puppy Bowl’ and actual game day was surreal. The opportunities that my team and I got to experience over that weekend were things that I would have never in my wildest dreams thought I would have ever been a part of. I am so thankful for my team and the opportunities that I have had this past season. I wouldn’t trade a minute of what I’ve done for anything else,” Merkle says.

“My mom and dad had always taught me that if I wanted to get something done, I just needed to put my mind to it and I could do it,” she says. “I have proven that to them and myself over the years and I am always looking for the next challenge and opportunity. I enjoy figuring out how to time manage everything and being able to do all of the things I truly love.”

The HTM profession can cheer on its newest member, especially when they see the drive and determination that she possesses.