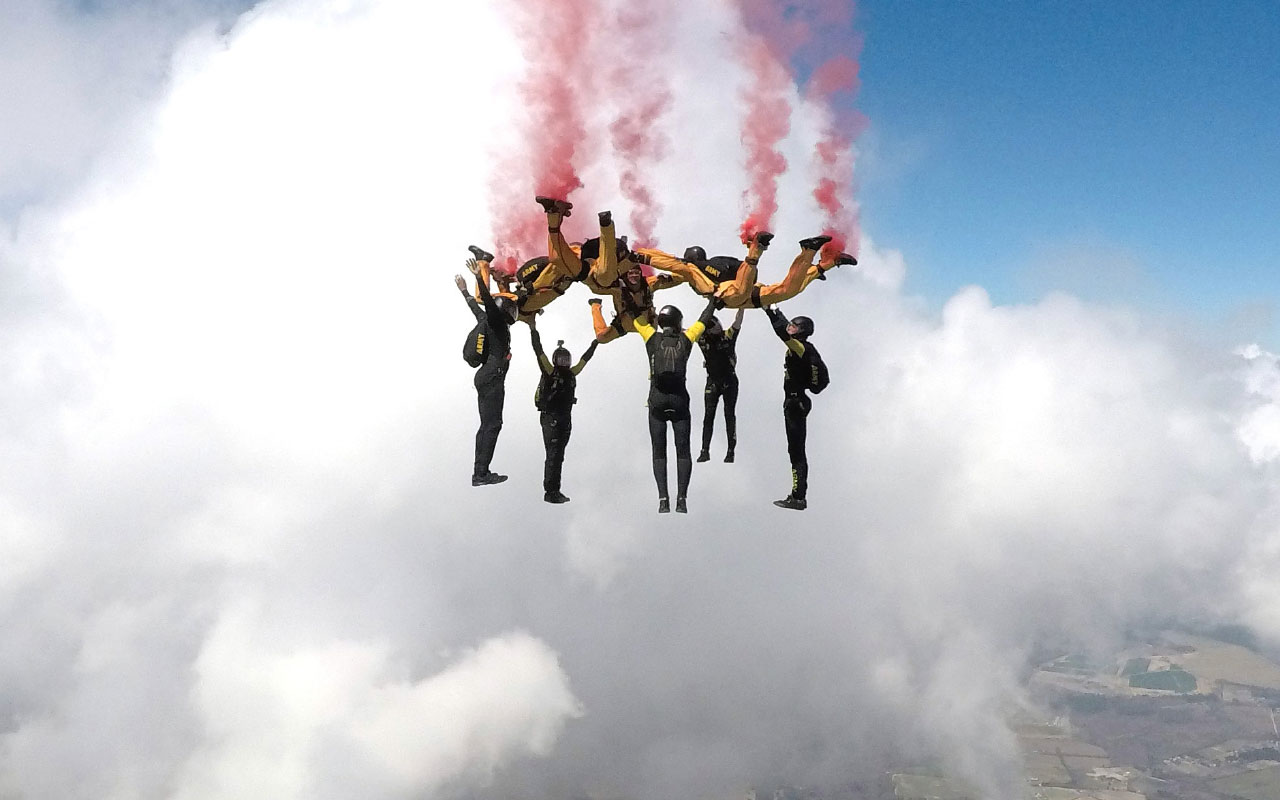 Biomed Adventures: Jumping with the Best of Them 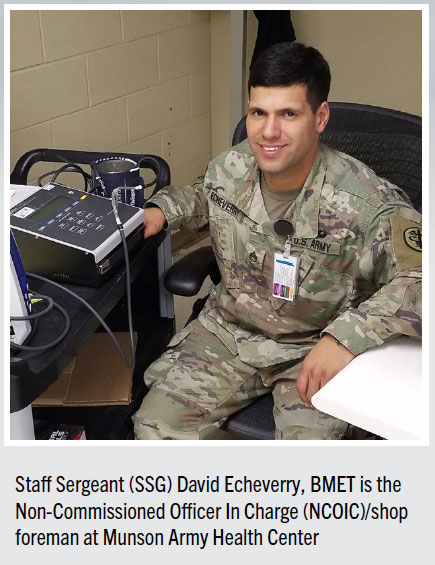 Many people would look at you sideways if you suggested that they dive out of an airplane at 13,000 feet. That might just happen to encroach on a few phobias. What might be worse is jumping out of that aircraft and then taking the time to think about how to safely and accurately coordinate your jump with several other people. You’re not just thinking about deploying your parachute but actually considering other critical steps before that.

Since 1959, a group of expert skydivers with the U.S. Army have done just that; they have jumped out of aircraft and achieved incredible coordinated demonstrations of artistry around the world. They are known as the Golden Knights, a Department of Defense aerial demonstration team made up of approximately 89 men and women.

Echeverry can speak with some level of confidence about what it is like to be a Golden Knight. He was jumping out of planes before ever jumping into malfunctioning medical equipment diagnosis.

“I joined the Army National Guard in December 2002 during my junior year of high school because it was the only branch of service with the option for me to go to the infantry and I could start training with my unit while still in high school,” Echeverry says.

“I completed basic training during my summer vacation between my junior and senior year; once I graduated from high school, I attended the Infantry Advanced Individual Training (AIT) at the same location as my basic training; Fort Benning, Georgia,” he adds.

Echeverry says that he saw the Golden Knights for the first time during the Fort Lauderdale Air and Sea Show when he was a freshman in high school.

“I looked back at my parents and said ‘that’s what I want to be when I grow up, that’s going to be me,’ and my parents looked back at me and said that I could do anything I set my mind to; I just had to work hard at it and never let anyone tell me I couldn’t do it,” Echeverry says.

He spent eight years in the infantry, during which time, he was deployed for one year to Afghanistan, before making it onto the Golden Knights.

“I attended the Golden Knights Assessment and Selection (GKAS) in 2008 and a few weeks into it I tore my meniscus and could not keep up with the pace and jumps. I was invited to come back again and had the opportunity to attend in 2010 where I was one of the eight graduating candidates and was ‘Knighted.’ The Golden Knights Assessment and Selection is held annually; it is eight-10 weeks long with no defined end date,” Echeverry says.

“The training is fast paced, and mentally and physically exhausting with a strong emphasis on how you react under extreme pressure and stress. As members of a demonstration team, you travel 180-220 days a year and ‘live in a glass house’ where you can be constantly in the spotlight and you must have the ability to conform to various situations and represent the U.S. Army and yourself in a good way,” Echeverry says.

Echeverry says that you can teach a monkey how to fly a parachute and just about land on target, but you can’t teach it how to be a good person, and that’s what the team looks for in its candidates; the right person for the job is not always the best skydiver. He says that they can build upon their skills once on the team.

The experience of being a Golden Knight is unique and structured.

“The Golden Knights is unlike any other organization I have been a part of; it is essentially a large family with a great sense of pride and a love for everything they do. The team consists of about 89 men and women from all walks of life who serve on one of the five sections of the team: demonstration team, competition team, tandem team, aviation section and administrative support section,” he says.

Echeverry says that of the total team of men and women that make up the Golden Knights, about half of them make up the jumpers to each of the sections with many of the administrative support section being former jumpers now serving in a different capacity.

“As a demonstrator, we did a lot of traveling, however the team does its best to ensure that when we are home, we spend sufficient time with our families and loved ones; many sacrifices and compromises have to be made, but at the end of the day we did our best to ensure our family’s needs were being fulfilled,” he says.

“At the beginning of a jump day, or prior to any show jump, each team has a huddle and reads off the team’s jumping ‘safety brief,’ and usually a ‘dirt dive’ (dry run on the ground of what is expected to be performed in the air) is conducted prior to each jump. Upon taking off, each demo team has its own chants/cheers that everyone takes part of and yells out when the planes wheels leave the ground. If there are press riders on the plane, the team ensures there is always someone sitting next to them and engaged in conversation or answering any questions they may have,” Echeverry adds.

He says that prior to jumping, most jumpers have individual personalized handshakes with each other (kind of like a secret handshake), and a handshake is something that is developed between two teammates that relates to an event that took place between them (such as an inside joke) and converted into a handshake.

“Most jumpers are extremely superstitious and stick to their specific routines. For example I always sat on the left side of the aircraft and my buddy always sat next to me to my left; it seemed every time I sat on the other side of the plane, something would go wrong such as landing in the wrong place or having a hard landing and twisting an ankle,” Echeverry says.

“Every jump is unique in its own way, so even after over 1,800 jumps, I would still get nervous on some jumps,” he adds.

Echeverry is the recipient of the prestigious Soldier’s Medal. A dangerous emergency during a jump, that could have killed him and a colleague, was averted through quick thinking on the part of both soldiers in 2013.

He graduated from the Army’s BMET school as the Honor Graduate of his class.

“[I] was fortunate enough to be afforded the opportunity to take some of the advanced courses at the schoolhouse immediately after. The advanced courses I took were: CT, computer-based medical systems (CBMS), and the BMET management course,” he says.

“I took up my position and started working at the end of July and hit the ground running. So far it has been great and along with my supervisor and mentor, we feel we have knocked out many things on the management agenda in a short period of time in order for our shop to run more effectively and efficiently, providing the clinic with better and faster service,” Echeverry adds.

What advice does he offer to anyone contemplating taking their first parachute jump?

“Do it,” he says emphatically. “Statistically speaking, it is safer than driving a car and most of the injuries suffered in the sport are usually by experienced jumpers who jump much smaller parachutes. Google search ‘skydiving near me’ and you may be pleasantly surprised to find a dropzone near you. Doing a tandem jump you will be safely secured to a tandem master who also does not want to get hurt or injured, therefore you should be in great hands,” Echeverry says.

He says that the best way he can describe the feeling of skydiving is a feeling of absolute freedom that you cannot experience elsewhere, and that feeling alone offsets any possible downsides to the sport that you may be thinking of.

“As a skydiver, I would venture to say that about half, if not more, of the skydivers I know or have met have some form of a fear of heights. Jumping from 10,000-12,500 feet, you do not have the depth perception, and that helps taking that first step out of the plane easier,” he says.

If you happen to be in a biomed shop in Fort Leavenworth, Kansas, and you overhear someone claim to have been on an elite parachuting demonstration team, don’t feel like you’re falling for a story; it’s legit.