Left: This Triumph TR6 is one of many Triumph automobiles Cliff Hall has owned. Right: The Mobil Pegasus adorns this gas pump jukebox.

Of all the models that Ferrari has produced, that vintage 308 GTS model became the most recognized for a generation of TV viewers. To own one would be a slice of nostalgia.

If you possess the skill set and knowledge to work with tools and build and restore things that require craftsmanship and mechanical aptitude, then finding an old Ferrari 308 GTS might be the perfect project.

For Cliff Hall, president of Signature Emergency Products (SEP) in Boothwyn, Pennsylvania, the challenge was worth it and he had the skills to make it happen.

Hall isn’t only restoring an iconic car like the one that Magnum fans remember. He has restored other cars as well as jukeboxes. It takes a special skill set to do both.

Learning auto mechanics and the beginnings of Hall’s restoration skills go way back.

“I was about 12-years old when my dad forced me to go to his shop and help him. I hated school and he found out I was hanging at the gas station around the corner of our house. Once at his shop, I got to learn how to work on cars with him and the mechanics that worked for him,” Hall says.

“My first job was to do a clutch job on a Triumph Spitfire. It took me a long time, but it went well. I started to like doing work on cars and found it rewarding – not money wise – that’s for sure; working alongside my dad was an experience I’ll never forget,” Hall says.

Hall says that he has three different kinds of welders; MIG, stick (electric/arc) and gas welders and that he took an auto body shop course in school which was a big help in getting into the restoration of cars.

“I have replaced more rocker panels than I can or want to remember which isn’t an easy task on a convertible because if it’s not correct you won’t be able to shut the doors and things will never line up the way it was before you started. I have mostly all the tools and supplies I need at a glance – which is great because I live in the country and the closet auto parts store is about eight miles away. I have to have things on hand or I would be running around for hours before getting anything done,” Hall says.

Cliff Hall bought a Ferrari 308 GTS off eBay with hopes of restoring it.

With tools and knowledge, what led to restoring a classic Ferrari like the Magnum car?

“The Ferrari was on eBay for sale. One day, I wasn’t even looking for the car, the page just opened up to it. That was weird, I thought. So, I traveled up to a little town in New York – I forget the name of it. But it turns out it was an auto body shop and he was retiring, so everything had to go. It has taken me a long time to gather the parts for the car because he lost a lot of them and some are just not available anymore. It’s been like trying to find hen’s teeth,” Hall says.

“The first Triumph TR6 (of the two owned right now), I had purchased from a friend that is still in the British car business. Funny enough, his place is called ‘British Racing Green’ in Newark, Delaware. He used to have cars piled up on his property. But as all things go, they are slim pickings now. When I think back on how many cars I have purchased, it boggles my mind,” Hall says.

Hall says that he purchased nine Triumph Spitfires at once and his wife went into panic mode. She asked him “Where are you going to put all these cars?”

“Well, I sold off most of them very quickly, so panic over. So, back to my friend; he had a TR6 in a storage container and one day I stopped in to see him and I asked what have you got for sale? Well once I saw it, I said, ‘I’ll take it.’ Well, a few months later, a friend of his called me and said he had a TR6 that he was restoring, but needs the room, so he trailered it to my house and, well, I bought the car and the trailer! Wow, that was unexpected. The wife thinks he is coming back for the trailer. Ha, ha, I finally told her the truth,” Hall jokes. 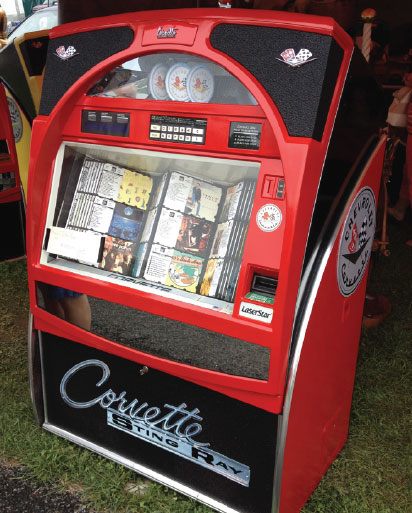 While restoring jukeboxes may seem to have nothing to do with Hall’s passion for classic cars, the two actually have several parallels.

“After I got out of the automotive business, I got into the arcade business, which is a long while ago now. I had bars, campgrounds, barber shops and a few other places that customers had to hang around. I liked that business and it was a good earner for many years, but after a while things slowed up. I remember lying in bed one-night thinking what the heck am I going to do with all the equipment,” Hall remembers.

It dawned on him that he could combine his passions. A car show he had attended for years was coming up and would be the perfect venue to sell the jukeboxes.

“How about making them look like cars, gas pumps; anything. As time goes on, people would suggest different themes to turn them into and the rest is history. I sold all I had and began purchasing jukeboxes from other vendors in the business who had the same problem I was having,” Hall says.

He says that the digital jukebox you see hanging on the walls of bars or other places are all set up through the Internet.

“Now, the vendors don’t have to change the CDs every few months; it’s all automated. But so is the money, no more cash, it’s all credit cards and the manufacturers send the owners of the machines the money it produces,” Hall says.

“Kind of put a real damper on that part of the business, but a great opportunity for me to pick up the jukeboxes they had sitting around. I was flooded with guys calling me once the word got out [that] I was buying old jukes. So, that’s how it started. I had already learned how to repair them at the school of hard knocks,” Hall adds.

Some of the jukeboxes take on a car theme and this is where Hall really brings his specialties together.

“I had a few that I have put those wings from the rear of like a Porsche or any other sports car. I also did one for an older gentleman who had a couple of 1955-56 Chevys, so I would look around at the car shows for good looking used parts like the fins on the tail lights and I would put LED lights in them and they would blink to the music. That was very popular; I was putting blinking LED lights on anything I could think of,” Hall says.

Hall’s jukeboxes have become a big attraction at car shows and have left attendees amazed and dancing.

“I can honestly say it has been a fun trip and a great adventure seeing people’s faces light up when they purchased one of those creations. When I was at a show, and a customer would walk up to the booth, they would say to someone that was looking at a box that it was the best thing they had purchased next to the car they owned,” Hall says.

From offering important medical supplies to practicing two creative and skilled hobbies, Cliff Hall has shown that you can balance work and pastimes and get a lot accomplished. Whether rocking around the clock or reproducing a vehicle like the one that was once tooling around Oahu, Hall’s efforts are restoring the best from the past.