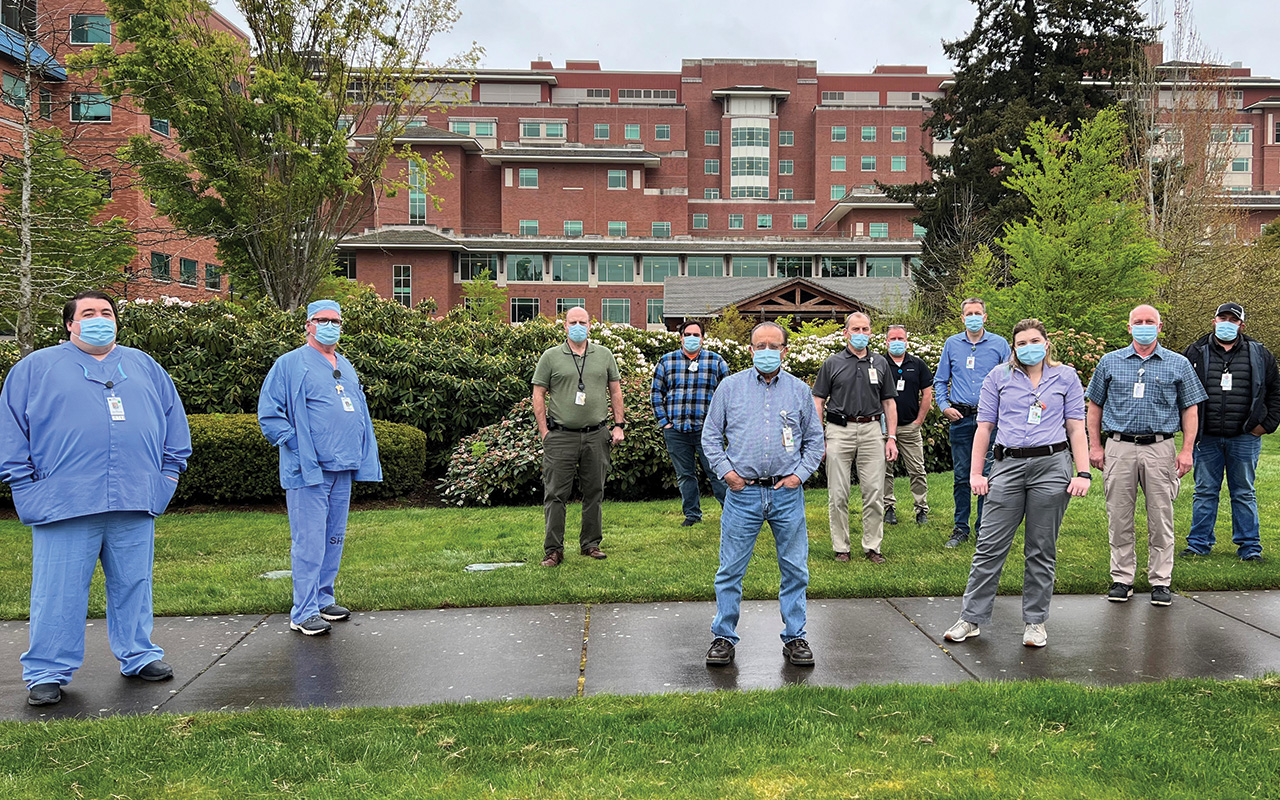 Posted By: TechNation Development Teamon: August 01, 2022In: Department of the Month, Magazine, Spotlight

Who could find fault with a health care system named PeaceHealth. The name includes two of the most important and coveted concepts known to humankind.

The health care system provides services to patients in Alaska, Washington and Oregon, and has been in existence since the 1890s. It was officially named PeaceHealth in 1994. Based in Vancouver, Washington, PeaceHealth has approximately 16,000 employees and more than 750 providers.

“We manage 23,314 devices in four hospitals and many clinics. We have emphasized training in our department so we can provide effective service to the 248 departments in our clinical network. We are based at PeaceHealth Sacred Heart Medical Center at RiverBend, a Level 2 trauma center that functions as a regional medical center in Oregon. Our team services PeaceHealth’s Oregon network, providing HTM services to PeaceHealth facilities in Lane County, Oregon,” Marden says.

The department is pro-active in its approach and keeps close tabs on inventory.

“One of our technicians participates in weekly environment of care rounds, checking that devices are labeled properly, and educating staff about our biomed program, when needed. Additionally, we help manage our RTLS system (Versus) for device tracking, ensuring that the trackers are charged, and the software is up-to-date with the correct information,” Marden says.

Providing Value to Clinicians and Patients

The CE team has been involved in several efforts that help their clinician colleagues as well as furthering the careers of team members.

“We’ve begun analyzing and reporting CMMS data to nursing and administration to initiate multi-disciplinary continuous improvement initiatives. These initiatives will have a significant impact on patient safety and operations through the identification of training opportunities, alarm reduction and the reduction of ‘unable to locate’ devices,” Marden says.

The team also assisted with construction and renovation of the cardiac labs, in-patient care departments; observation unit and emergency department.

“Our team helps manage the installation, storage and maintenance of the medical devices involved, as well as makes recommendations for purchasing new or replacement equipment,” Marden says.

Like so many other HTM professionals, the team was called upon to help manage the additional requirements of COVID-19 patients.

“We helped with the purchase, installation and maintenance of respiratory protection for the staff (CAPRS, PAPRS) and with an expansion of the hospital ventilator supply. Additionally, we loaned ventilators to other nearby hospitals, which involved extra safety checks and device tracking,” Marden says.

He says that the department continues to advance by constantly improving in-house capabilities through training and career progression.

“We have over 20 formal training opportunities on the books for FY22 with a focus on our most critical or cost-intensive devices,” Marden says.

Also in 2022, barriers were removed allowing for the promotion of four internal candidates and for one of the biomed caregivers to transition to an imaging specialist role.

“Our team maintains a Philips Intellivue PIIC iX network with over 90 PIIC iX computers. We’ve worked together to replace the UPS backup system for every device, and to become effective in cyber remediation. Additionally, our entire network of PIIC iXs recently lost its Windows activation,” Marden says.

He adds that the team worked closely with Philips to diagnose and remediate the problem because any device that lost power would lose central patient monitoring.

“We were able to safely reactivate the system within 48 hours. About a week later, the hospital experienced a power surge that momentarily wiped-out power. Thanks to teamwork and quick action, we were ahead of a major downtime,” Marden adds.

In today’s world, HTM professionals often wear two hats, as they learn to protect the threat surface from cyber attacks.

“Our team consists entirely of BMETs. With the growth of networked medical devices, we’ve recently had to learn to speak cyber. One of our bigger challenges has been to thoroughly document all of the network information for connected devices, learn about cybersecurity and patching, and effectively distribute manpower to tackle the necessary updates. Working with each other and IT and cyber professionals, we’ve learned a lot and made tremendous progress,” Marden says.

The team has also provided education to clinical colleagues to improve the likelihood of receiving work orders and better work order details.

“It’s not uncommon to find devices hidden in a supply area with a note that says ‘broken,’ or for devices to appear in biomed for repair without any supplemental information. In the last year, we’ve worked with clinical staff, managers and educators to spread the word about what clinical engineering does. Effective communication, quick service and positive attitudes have led to an increase of reported work orders that include details that help our team efficiently diagnose and repair equipment with minimized downtime,” Marden says.

The CE department has worked hard to bring the greatest level of service to its facilities and equipment inventories.

“Our entire team is passionate about HTM. We work hard and often go above what is asked of us for both our clinical and administrative staff. Our team members participate in daily management meetings, weekly in environment of care rounding (audits) and regularly advise on projects and incidents throughout our network,” Marden says.

The HTM professionals on this CE team have done their part to bring peace to busy clinical staff and contribute to the health of those depending on medical devices.