ECRI Update: What You Need to Know About Ultrasound Therapy Systems

Therapeutic ultrasound units convert electrical energy to high-frequency (i.e., 1 or 3 megahertz [MHz]) sound waves that penetrate tissues to produce pain relief and facilitate tissue healing through thermal and nonthermal physiologic reactions. This energy conversion occurs in the transducer, or sound or treatment head, of the machine. Ultrasound as a modality can be used independently or in conjunction with a neuromuscular stimulator to enhance pain-relief mechanisms and aid in the healing of soft-tissue injuries.

When tissues absorb energy, most of that energy is converted into heat. Therapeutic ultrasound, a modality used in the treatment of soft-tissue injuries, relies on a transducer to apply energy to the patient’s skin in the form of sound waves at frequencies well above those audible to the human ear. A frequency of 1 MHz is used for deep (3 to 5 cm) tissue, while a frequency of 3 MHz is used for more superficial (1 to 2 cm) tissue. Low frequencies (below 1 MHz) are used on some units for greater penetration, but the ultrasonic beams are less focused. Some ultrasound therapy units accommodate the use of two transducers at a time either to treat two separate areas on one patient or to treat two patients at once. Ultrasonic energy is gradually absorbed and converted to heat as it travels through the tissue; the focusing of the ultrasonic beam makes it possible to heat the underlying tissue without overheating the skin itself. Muscle absorbs approximately twice as much ultrasonic energy as fat does; bone absorbs about 10 times more than soft tissue does. In traveling through the first 3 cm of muscle, the ultrasonic beam retains about 50% of its surface intensity value, a satisfactory amount for deep heating. The rate at which tissue temperature increases when exposed to the ultrasonic beam depends on the intensity (power per unit area, expressed as watts/cm2) and local circulation, since blood will carry heat away from the area. 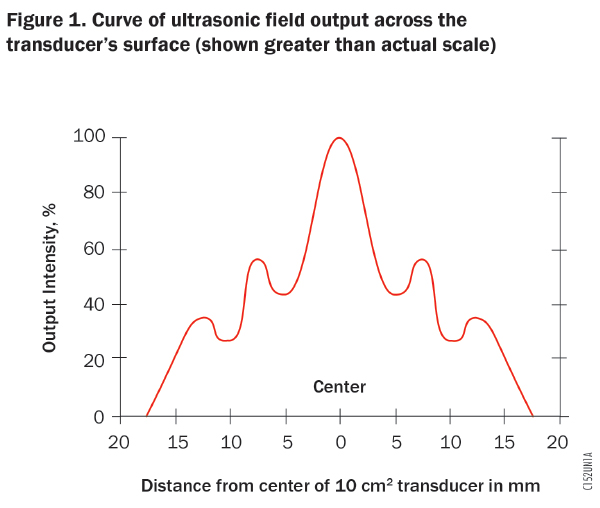 A therapeutic ultrasound unit has two basic components – a generator and a transducer. The electrical output of the generator is applied through a flexible cable to a piezoelectric crystal in the transducer. The crystal converts electrical energy into acoustic energy through the reverse piezoelectric effect: as the voltage alternates, the crystal expands and contracts, creating mechanical vibrations (i.e., ultrasound waves). This acoustic energy exits the transducer in a collimated beam pattern. A special coupling gel or water is used to facilitate transmission of the ultrasound beam from the transducer to the patient’s skin (not using gel or water, or using an inadequate amount, will cause heat at the transducer-skin interface instead of in the underlying tissues, possibly burning the patient). Some transducers are watertight, allowing for underwater therapy.

Most units allow selection of a continuous mode, in which the output power is constant, or a pulsed mode, in which the output is switched on and off; the pulse rate is typically 50 to 150 pulses per second (pps), although some units operate at a higher or lower rate. Pulsed waves are further characterized by the duty cycle, the percentage of time that ultrasound waves are transmitted during a pulsed period. Typical duty cycles range from 5 to 50 percent. Because the output power of a pulsed waveform averaged over the on-and-off phase of the cycle is lower, it causes less heating than a continuous output on the same setting. This means that the pulsed setting has fewer thermal effects. Some studies have associated a reduced healing time with pulsed ultrasound.

An important characteristic of the transducer is its beam nonuniformity ratio (BNR), which approximates the intensity across the transducer’s effective radiating area (ERA) – the actual area of the transducer that radiates ultrasound energy. The BNR is the ratio of the maximum intensity point on the transducer to the average intensity value across the transducer surface. Areas of high spatial intensities are known as “hot spots” and may cause excessive heating to the underlying tissue. A lower BNR indicates a more even distribution of energy from the transducer (see Figure 1).
For correct application of ultrasound, the transducer must be kept in constant motion, using either a stroking motion or an overlapping circular motion. Stationary application can lead to a buildup of heat in one spot, causing a burn to the skin or to deeper tissue. It may also lead to the formation of standing waves, wherein the incident wave and the waves reflected from the tissue interface in the body are superimposed on each other so the peaks of both waves combine to either increase the effect or cancel out the therapeutic effect. Standing waves can damage the tissues that surround the wave and may cause clots to form in smaller blood vessels.

Since there is no direct indicator of internal tissue temperature, the operator depends on patient feedback to adjust the intensity of the treatment and prevent burns. The operator can, however, estimate the output strength by knowing the ERA, the sound-wave frequency, and the length of treatment.

Ultrasound output may decline over time leading to less effective or inconsistent therapy. The instrument should be inspected annually and following any mechanical impact to the transducer (e.g., from dropping) to ensure satisfactory output calibration. The transducer assembly is prone to deterioration and should be checked frequently to verify proper transmission and water impermeability.

The intensity levels of ultrasonic therapy are generally much higher than those of diagnostic ultrasonic equipment. Clinicians should therefore be aware of potential hazards (e.g., areas of insufficient blood flow that cannot handle the increased metabolic activity caused by ultrasonic treatment) and use therapeutic ultrasound with care. Inefficient coupling caused by a defective crystal, or an insufficient amount of acoustic coupling gel will also cause heat to build up in the transducer and thereby reduce the number of sound waves radiated into the treatment site.
Therapeutic ultrasound is contraindicated for use in the eye, the uterus during pregnancy, the testes, and the spinal cord, as well as areas over the heart, pacemakers, malignant tumors, joint replacements with polyethylene or methyl methacrylate (a common glue type), prostheses, or epiphyseal (growth) plates in patients under the age of 20. In addition, ultrasound application may damage tissue that has been subjected to deep radiation treatments.

Therapists administering ultrasound treatment are also exposed to vibrations passed through the housing of the transducer as they hold the applicator. These vibrations, known as parasitic radiation, may cause acute pain in the hand and finger joints of some therapists.

Ultrasound therapy units should have transducers with connectors to permit user exchange; ideally, the ultrasound unit should operate at frequencies of 1 and 3 MHz and should have continuous and pulsed output modes. Transducers should be watertight and have a BNR of ≤6; pulsed rates typically fall between 50 and 150 pps. Preferably, the unit should come equipped with an automatic shutoff for inadequate transducer coupling. Dual-frequency units have transducers capable of emitting both frequencies through the same treatment head, which is often considered more convenient and easier to use. Buyers should consider units with a maximum output of at least 10 watts because greater energy output increases therapeutic value.
If portability is a concern, buyers should consider units that weigh less than 3 kg (6.6 lb) to reduce risk of injury due to strain. Other specifications such as configuration and ERA are functions of patient and clinician preference as well as treatment location.