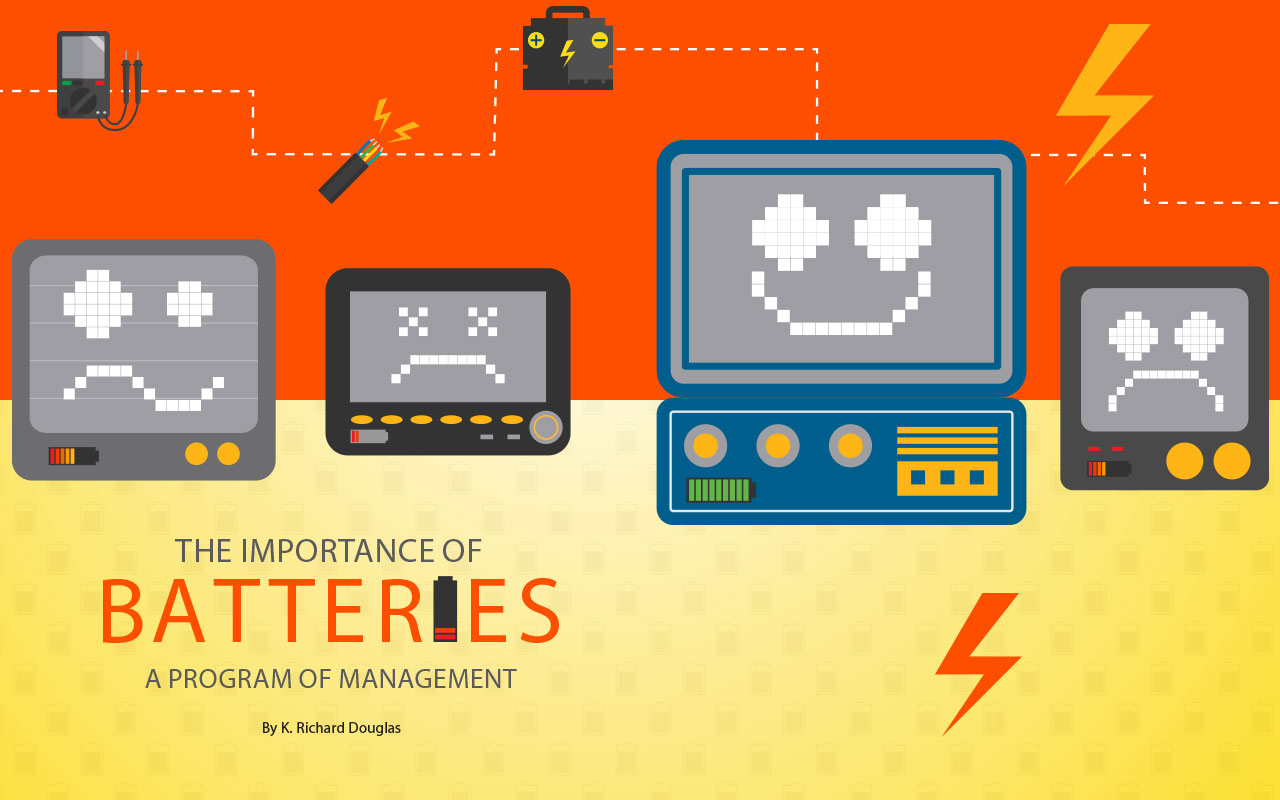 The Importance of Batteries – A Program of Management

The Energizer Bunny keeps going and going, but not all medical devices, regardless of battery brand, can be as dependable. Batteries have made the list, time and again, of issues that HTM professionals believe require attention. There is the scrutiny of CMS and The Joint Commission as well, that a battery-related incident may invite. As a patient safety issue, getting battery management right is paramount, since a dead battery can ruin somebody’s day.

The Energizer Bunny keeps going and going, but not all medical devices, regardless of battery brand, can be as dependable. Batteries have made the list, time and again, of issues that HTM professionals believe require attention. There is the scrutiny of CMS and The Joint Commission as well, that a battery-related incident may invite. As a patient safety issue, getting battery management right is paramount, since a dead battery can ruin somebody’s day.

It was dear old Ben Franklin, brilliant in so many ways, who first coined the term “battery” in 1748. While Franklin was referring to an array of charged glass plates, the structures and ingredients that made up batteries continued to be tweaked and improved. A number of inventors contributed to the development of the battery, right up to Thomas Edison, who invented the alkaline storage battery. Other innovations happened throughout the 19th and 20th centuries.

Batteries have a clearly definable lifespan, a predictable amount of “juice” and specific applications based on design. The relentless drive of technology toward more computer chip-reliant and compact designs has increased the number of battery-dependent medical devices. The HTM professional is faced with developing a set of protocols for dealing with this increased dependence on batteries.

Noticing that something has stopped working because the last vestige of energy has been drained off isn’t always an option either; proactive battery management is an integral part of every HTM operation.

Battery management also means that battery inventories make sense and balance need with supply, costs are kept in check and the useable life of batteries is extended as long as it safely can be. Conscientious recycling is a part of these programs also.

It Doesn’t have to be OEM 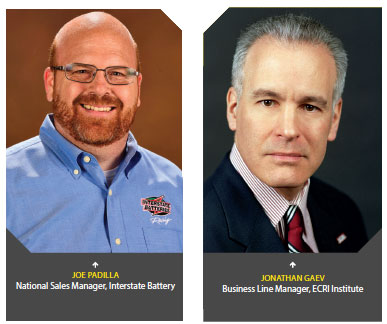 The failure of a battery to do what’s expected of it can be caused by some inherent problem with the battery as well as human-caused. A battery replaced with the wrong replacement type, a loose connection, leakage, the lack of a power source for recharging or the simple oversight of not plugging in a plug to recharge a battery can all lead to premature depletion.

Survey respondents have told AAMI that battery management has been an even greater concern for HTM professionals than alarm management. The issue has been vexing to HTM departments on many levels.

The batteries used to power medical devices don’t necessarily have to last for a prescribed number of hours or months.

“There is no specific requirement by CMS/TJC regarding battery life. Some HTM departments are very concerned about liability issues, and for that reason, either don’t use non-OEM batteries or only use them in ‘non life-support’ equipment,” says Jonathan Gaev, Business Line Manger, BioMed, HD Project Engineers at ECRI Institute.

“Significant savings may still be achieved by using non-OEM batteries for that type of equipment – such as mobile imaging equipment and uninterruptable power supplies (UPS),” he says. “Use third – party batteries and you may save up to 40 percent of the cost when compared to OEM products.”

“According to a survey that ECRI Institute conducted last year, the types of problems with batteries, such as not fitting properly and swelling, seem to be the same for OEM as for non-OEM batteries. Some organizations have had experiences where they felt that non-OEM batteries didn’t last as long as OEM batteries,” Gaev says.

Is there an acceptable method to predict battery life?

“The amount of testing is determined by the criticality of the situation. Testing, properly done, is the way to minimize risk and liability, or as I see it, providing performance assurance. In the case of ‘smart batteries,’ they are constantly checking themselves, so having the ability to see what they have to say will drastically reduce the need for testing of these,” Marlow says.

A scientific approach can be taken to assure that after-market batteries can stand up to the rigors of whatever application they are used in. Battery manufacturers are ready to prove that point.

“Interstate Batteries has the tools, and software, to help hospitals predict when the specific batteries are reaching end of life. In addition, Interstate can use this technology to increase the life of some batteries, depending on the chemistry and application,” says Joe Padilla, National Sales Manager, Interstate All Battery.

“This is evidence-based maintenance, complete with data driven reports and serial number tracking of each battery,” he adds.

“The issue isn’t as cut and dry for all devices in a hospital” says Alan Lipschultz, CCE, PE, CSP, President of HealthCare Technology Consulting LLC in North Bethesda, Maryland.

“There is a definite cost versus quality issue when specifying batteries. For ‘critical’ equipment – CMMS and TJC now require facilities to define which of their equipment is critical – I do not suggest making an attempt to purchase batteries from anyone other than the original manufacturer without a thorough, documented analysis that is approved by the appropriate committee in your organization,” Lipschultz says.

Lipschultz had earlier presented findings of an Aramark study that included OEM versus non-OEM battery analysis at an FDA workshop on battery-powered medical devices in 2013.

“I make this suggestion because any cost savings on the battery side are unlikely to offset the risk involved with increased downtime or unexpected failure of a critical piece of equipment. For non-critical equipment, I suggest dealing with a battery distributor who advertises their batteries as being suitable for the medical device involved and is ISO 9001 certified,” Lipschultz says.

Additionally, it should be determined if a manufacturer’s warranty requires the use of an OEM battery.

“It is difficult to get the same life out of every battery, even if it is the same chemistry in the same application,” Padilla says. “The ever changing environment of a hospital is hard on batteries, however, through the use of our life cycle management program, Interstate can use data and algorithms from across the country to predict within a few months when a battery will need to be replaced.”

“How does a method fit with risk/liability concerns? The proper maintenance program can greatly reduce the risk associated with some batteries,” Padilla adds. “In the event a Class III application fails, a regular battery maintenance program can demonstrate the hospital was proactive in their approach to managing life critical equipment.”

Battery Maintenance Program: just do it

“It is wise to first determine how much the HTM department is currently spending on batteries and then break that figure down into the annual spending in the main equipment categories such as defibrillators, mobile X-ray, UPS and infusion pumps,” Gaev recommends. “Start with ‘non-life support’ equipment and develop a relationship with a supplier of non-OEM batteries.”

He suggests tracking the performance of non-OEM batteries to ascertain that there is not a pattern of problems that are different or more frequent than those seen in OEM batteries. 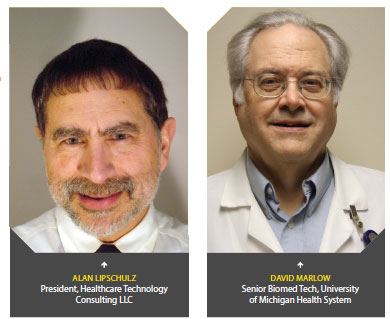 “Then, you can extend the program to cover additional equipment categories. You may also be able to negotiate a better deal with the OEM after you are sure that non-OEM batteries will work well for you,” Gaev adds.

“A few HTM departments — probably less than 25 percent — test their batteries upon receipt and/or before replacing them. In order to properly interpret the results of tests on non-OEM batteries, you first need to test your OEM batteries so that you will be able to compare the results,” Gaev says.

Lipschultz says that HTM departments should determine who is their local “battery expert.” That person should have a good understanding of the differing battery chemistries and specifications.

“For starters, I recommend http://batteryuniversity.com/buy/. Batteries are complicated devices that can have a major impact on your medical devices. The battery maintenance program for rechargeable batteries – usually the biggest headache for HTM departments – often starts with making it easy for users to plug in the device when not in use,” he says.

“HTM groups should also set up a means of tracking what battery life they are actually getting on an equipment manufacturer/model basis; this data should enable them to spot problem areas and identify when they have a problem,” Lipschultz says. “When a problem is identified, they need to keep track of when an intervention is taken to attempt to fix the problem and if that ‘fix’ really helped or not. There are many failure points when dealing with battery issues.”

It also requires the right tools for the job.

“I find that having the equipment and knowledge how to use it to test most of the batteries is the key; otherwise depending on OEMs as a source and following their recommendations is the only other justifiable, but not as reliable option,” Marlow says.

He adds that finding a good third-party battery supplier, that provides excellent support, along with the ability to provide custom battery packs, is important.

“We have three primary ones that we use; Unipower, R&D Battery and a local Batteries Plus store. These can supply most of our battery needs at one-half to one-third the cost of the OEMs. We still do purchase some batteries from the OEMs in special cases.”

He says that they still test critical batteries, even if purchased from the OEM; before, and in some cases during and after use.

“That way, you will have a good idea of when, how and why they fail, and can prevent defective ones from being installed,” Marlow explains. “If a battery is found to be failing prematurely, I try and find out why, as I see performance assurance as more important than just saving money.”

“HTM can reduce the overall costs of batteries by understanding and managing the complete life cycle of a battery. Too often batteries are not thought of until the application it powers no longer works,” Padilla says. “This leads to a cascading effect of wasted money and time. HTM needs to think different about batteries. The process of sourcing, logistics, usage, and disposal have many hidden costs, which negatively impact a hospital’s budget.”

He says that his company can help with “finding the right chemistry, eliminating shipping costs, increasing battery life, and properly recycling the battery in a sustainable manner.” He also suggests using his firm’s “no cost, just in time delivery,” maintaining inventory levels that more accurately reflect needs; without waste.

“Interstate also has the technology to identify when a battery is starting to reach end of life,” Padilla explains. “This allows the hospital to better budget for batteries and replace only the ones that need it. Recycling of batteries is not only the right thing to do, it’s the law. Interstate has free recycling programs that properly dispose of batteries and provide closed loop documentation.”

Marlow summarizes his battery management approach this way; “Acquire the equipment and obtain the knowledge and experience needed. Minimize and monitor battery stock. Track the battery history in devices. In critical devices, replace the batteries before they may fail – but not too much before.”

Much of the useful life of a battery isn’t necessarily determined by what device makers predict, but based on the behaviors of users. This is yet another component of a comprehensive battery management program; part science, part behavior.