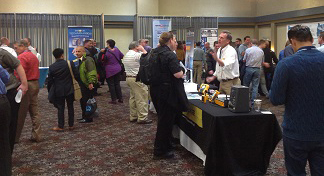 The Oregon Biomedical Association’s 2014 Statewide Conference and Exhibitor Exposition was a huge success topping the 2013 event.

OBA President Russ Magoon said it was “better than last year” with over 100 attendees and almost 200 people when including exhibitors. They were 42 booths compared to 34 last year.

The speakers and interaction among attendees were one of the highlights of the expo for Magoon.

“I enjoyed watching 70 people listen to Mr. Pat Lynch, and the exhibitor fair was great because people are constantly moving around and interacting,” he said.

“The Biomed community is small, but we can achieve more if we learn to come together to share ideas, training, and spend some time networking,” Magoon added. “Biomed societies allow former co-workers to meet again, provide the opportunity for techs to talk through current problems, and allow managers to brainstorm with others in the field of management. I hope techs will continue to see the benefits of being active in their local society.”