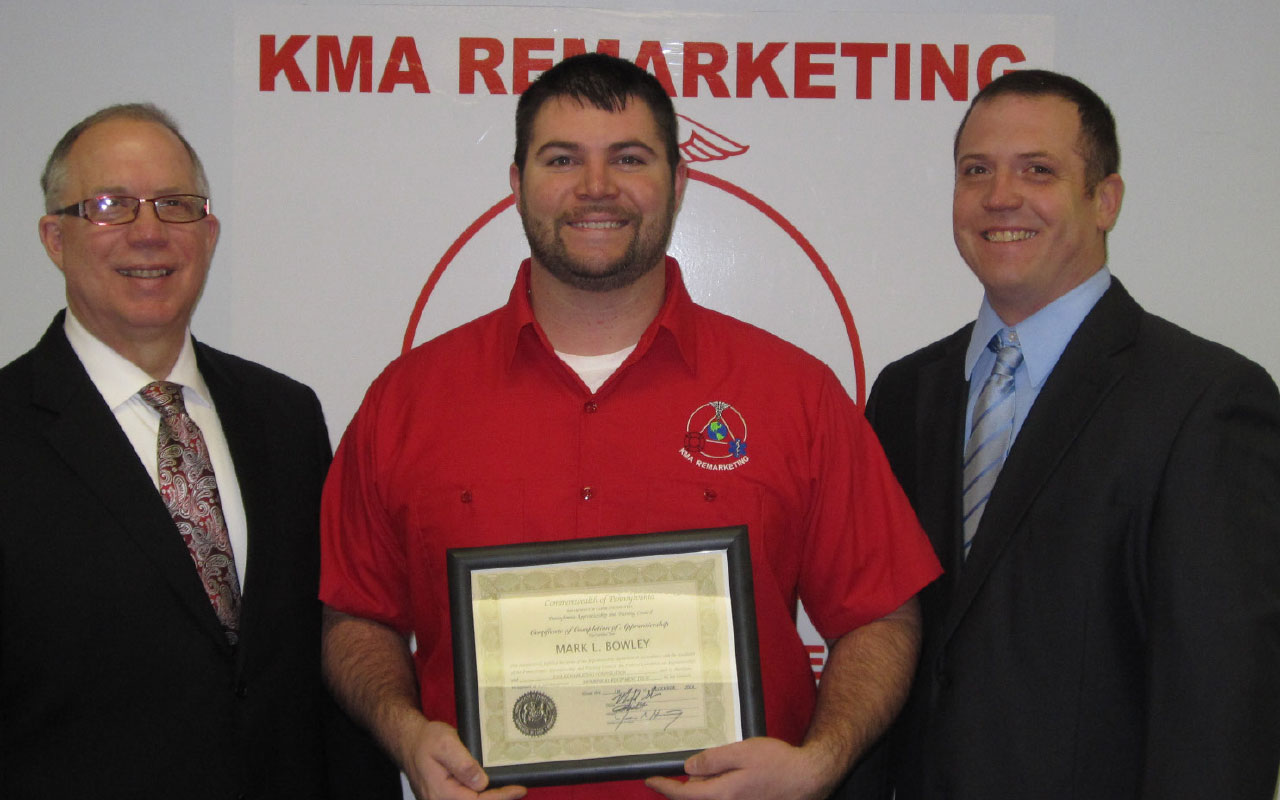 Professional of the Month: Hands-on Learning Ideal for Journeyman Biomed

Posted By: John Wallace IIIon: June 01, 2015In: Magazine, Professional of the Month, Spotlight

Journeyman Biomed Mark Bowley took a unique path to his career of choice and did it all without leaving the area where he grew up in rural Pennsylvania.

The rural setting is a special place for Bowley, but the scenic hunting and fishing lands that he sees as a positive have made it difficult for KMA to recruit and hire biomeds. 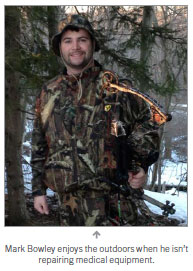 KMA President Dana Smith decided to recruit from within in the community and found a win-win situation via a federal apprenticeship program. Smith said it took about 18 months to develop the program and have it approved by the Department of Labor. Once it was approved, Smith used his background in education to train Bowley to become a biomed.

Smith said a two-year associate degree is a quality education, but the four-year apprenticeship program takes a comprehensive approach that adds a significant amount of hands-on work to the student’s education.

Another difference is that an apprentice is paid an hourly wage during his education with a raise each year instead of paying for classes
and often incurring student loan debt. The program is also designed to prepare the apprentice for the CBET exam upon completion of the program.

Bowley, as part of the program, also agreed to a three-year commitment to work at KMA after completing his education. The idea of working basically in his hometown is an added plus for Bowley, who is engaged to be married this year.

The program also made Bowley a Journeyman which means he can now train an apprentice through the program.

Like a lot of biomeds, Bowley grew up fixing things even if that meant taking them apart just so he could put them back together. His experimenting led him to some exciting work as a mechanic working on race cars.

“I got my knowledge of mechanics from my first job. I worked at BGR motorsports as a mechanic, metal fabricator and jack man,” Bowley explains. “During the week I worked in the shop preparing the cars and on the weekend would perform pit stops as a jack man. Benny Gordon was the driver and we ran the Hooters Cup, NASCAR Craftsman Truck and NASCAR Nationwide Series.”

Working on cars helped give him the chassis on which to add talents and education to become a biomed.

“When I first started at KMA I was at zero,” Bowley says.

“To be honest, I knew nothing about the biomed profession before I started at KMA. I was offered the job, took it, and never looked back,” he adds. “The four-year apprentice program helped me learn the field and all the equipment we encounter. I was always into mechanics and liked to tinker around with things. The two things came together and now I’m making a profession out of it.”

It was an involved process and Bowley is thankful for the many hours others gave to help him become a Biomed. 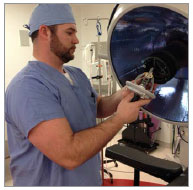 “I received a ton of knowledge and guidance from my boss Justin Ross,” he says. “He has been in the field for 10 years. So, he has seen a lot. There was one class I took that really helped me. It was an introduction to biomed equipment. It was a one-week class taught through DITEC (Diagnostic Imaging Technical Education Center). The class was held at Penn State New Kensington and Myron Hartman was the instructor. It helped me get a basic understanding of the equipment and how they are used in the field. Other than that, it was very hands on. I feel that I learn better that way. You can read manuals all day long, but until you actually get the problem in your hands you don’t begin to absorb it.”

Bowley says being a biomed is rewarding because you still have the opportunity to learn something new every day.

“Every day working as a biomed you encounter new and difficult challenges. It is humbling when you think you know everything about a piece of equipment and it will find some new way to break down on you,” he says. “That’s what’s great about this job. It will keep you on your feet. You are always learning new things.”

Life is good for Bowley. He has a new career he enjoys, a woman he loves and strong family support nearby.

“I am engaged to my girlfriend, Dayna, and plan to get married in the near future. Dayna has two children, Zhane and Jayda,” Bowley says. “My mom, dad, brother and sister live in the same town as I do so we are always together.”

He also still has lots of opportunities to explore nature in rural Pennsylvania where he can go hunting and fishing when he needs a break from work.

“I grew up in the country outside of the small town of Reynoldsville, Pennsylvania. I now live in Falls Creek, Pennsylvania, which is about 10 miles from Reynoldsville,” Bowley says. “Living in the country, hunting and fishing was not only a hobby but a way to pass the time. A lot of my earliest and best memories are of some outdoor adventure. My parents’ house sits on a 120-acre lot and is prime white tail (deer) habitat. Also on the property there is a three-acre pond and creek that flows the length of the property.”

“I’m very lucky to have such a nice outdoor preserve,” he adds.

Bowley says he is also lucky to have a great career and a bright future.

“I’m a goal driven person. I like to see the job done right the first time. I’m very lucky to have gotten the opportunity to be involved with KMA and the apprentice program,” Bowley says.