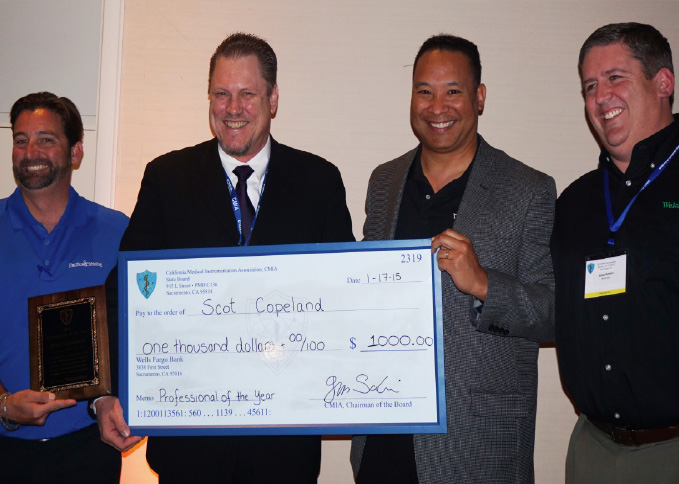 The evolution of health care, with more medical devices integrated into networks, has seen many veteran HTM professionals retrain and adopt. This has often involved taking electronics competency and supplementing it with network knowledge. 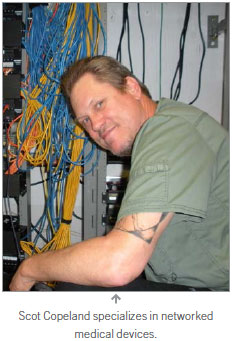 “I had a friend way back when who got a job with a third-party biomedical company after he got out of the Navy,” Copeland remembers. “After I was discharged into the U.S. Marine Reserves as a radio repairman, he suggested I might want to try it out as they were looking for another tech. The job I had at a government aerospace contractor couldn’t compete with the pay so I tried it out.”

“I was immediately hooked by all of the technologies and the personal satisfaction of repairing equipment that helps people,” he says.

That was how it all began for Copeland.

His early training came by way of the USMC. As a radio repairman, he served in the 4th Tank Battalion, a reserve unit based in San Diego.

“The training consisted of a strong and condensed basic electronics curriculum, followed by radio theory and fundamentals, and then specific training on the types of radio systems we would encounter at our duty stations,” Copeland says. “The military basic electronics is what gave me the best start for biomed.”

Starting out his biomed career as a field service technician for an ISO in San Diego in 1982, he later became the shop manager for a 400-bed facility in 1989.

“Since then, I served at a local imaging service provider as a biomed/radiology system repair tech and at a nationwide third-party as a respiratory specialist for their contracts in Southern California,” Copeland says.

Copeland joined his current employer in 1995, starting as a biomedical lead technician in charge of “administering the Medical Equipment Management Plan for one of the hospitals in our group.”

“In 2007, I was CompTia certified as a Net+ Certified Professional as we began to evolve our services to support medical devices in the network environment,” he says. “I became the first Clinical Systems Specialist at Scripps Health specializing in networked medical devices and systems.”

The network training has positioned Copeland well with the realities of the HTM profession today.

“I am the go-to guy for networked-type medical device systems for all of Scripps Health. In 2013, I graduated from college with a bachelor’s of science degree in IT security and we are now headlong into implementing a medical device security program at Scripps,” he adds. 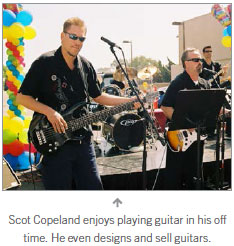 Copeland says that Scripps has partnered with [the] Center for Medical Interoperability (C4MI) and have assessed their capabilities to implement ISO/IEC 80001-x with the intent to do so as much as can be done.

In January, the California Medical Instrumentation Association held its annual symposium. Copeland was presented with the CMIA Professional of the Year Award, sponsored by Welch Allyn, at the event.

“I was highly honored to accept,” Copeland says. “My 2014 presentation documents and technical paper on Interoperability and Security have been included in the AAMI University.”

The HTM field has evolved and biomeds like Copeland are prepared for the new challenges it presents.

“In addressing the information security aspects of our field, over the past few years, we have found that it is a whole new world we need to tool up for,” he says.

Copeland says that HTM was founded on the ability to evolve along with, and be able to support, any technologies that came along in the clinical environment, but this one is proving to be a big leap. He say that

because of this, many are having a hard time grasping the whole subject and understanding how to move forward.

“The resources are limited. No longer can an equipment manufacturer provide all the support you need to make your equipment safe, effective and secure because the security has to do with your networking environment,” Copeland says.

“The manufacturer knows nothing about that, nor do any regulatory agencies,” he adds. “Those who know about your networking environment have no clue about medical devices and systems. In teaching some education sessions at AAMI, and elsewhere, I have found this not just here at Scripps, this is a nationwide subject for everyone and it is difficult to find support and leadership for the effort.”

Playing guitar is a passion of Copeland’s. He has played with his church’s worship team for many years. He even designs and builds guitars that can be purchased online at www.copelandguitars.com.

“My wife and I have a couple of Harleys and we love to trailer them across the country touring our beautiful National Parks and visiting family,” Copeland says. “I have three children and three grandchildren that I am proud to be associated with.”

Despite getting in on some cutting-edge training for a biomed and crafting cool guitars, Copeland reminds readers that he is no different than the next biomed.

“I’m just a regular guy. My guitars and bikes are shiny, but I throw my clothes on the bedroom floor, and my wife gets mad at me, just like everyone else,” he says.