Professional of the Month: Keith A. Todd, CBET

Posted By: K. Richard Douglason: January 01, 2021In: Magazine, Professional of the Month, Spotlight

The military can lead to a lifelong profession and sometimes it can be the catalyst to meet your future spouse. Sometimes, it can be both.

Keith A. Todd, CBET, is a biomedical equipment support specialist in the biomedical engineering department at the Alvin C. York VA Medical Center in Murfreesboro, Tennessee.

“I first learned of the biomed field while stationed in Korea. I volunteered to go to Korea and was serving in the 2nd Infantry Division Long Range Surveillance Detachment. I was up for re-enlistment and wanted to change my military occupational specialty. I was airborne infantry and wanted to get some specialized training in the medical field but was not sure what area,” Todd says.

He had entered the U.S. Army out of college with a bachelor’s degree in biology and knew his biology degree would be of use while training in a medical-related field.

“Before I went to a four -year college, I completed an industrial electricity program after graduating high school and then worked for two years as an industrial electrician in a steel manufacturing plant. Something that could combine the biology studies and the training and work experience of the electrical field would be perfect; but what could that be?” Todd wondered at the time.

Todd’s squad leader’s wife, during his time in Korea, was a biomed. She told him specifically what she did in her biomed work and he was more than interested.

“I then discussed this with the re-enlistment NCO and re-enlisted for Biomed Equipment Repair Technician. After completing my time in Korea, I transitioned back to the states, took leave and then reported to Sheppard Air Force Base in Wichita Falls, Texas for biomed school,” he says.

Todd completed the DOD Biomed Training course and, being airborne qualified, was sent right back to Fort Bragg where he was prior to being in Korea.

“The airborne wings act as a magnet, and seems to keep you at, or at least bring you back to Fort Bragg; but this time it was not just myself returning. While going through the biomed training at Sheppard Air Force Base, I met my wife. We were the same age and she was a reservist also going through the DOD biomed school. Aside from her being from the northeast and myself from the southeastern United States; we had much in common,” Todd says.

He says that the two of them spent a lot of their free time together and, after a few months, discussed marriage.

“She was about six weeks ahead of me in the school and, after graduating, she had to go back to her unit. This was the late October, early November time frame. We then arranged for her to come back to Wichita Falls two days before Thanksgiving,” Todd says.

“On that Wednesday before Thanksgiving, we had scheduled with the Justice of the Peace to have a marriage ceremony. During my lunch break on that day, we went to the courthouse and had a quick marriage ceremony,” he adds.

Todd says that they had a great Thanksgiving that year.

“Not much furniture, secondhand pots and pans, a one-bedroom section of a divided old house I was renting but lots of fun and great memories,” he remembers.

Todd worked in a couple of different biomed positions while in the Army when a position opened up at the base hospital at Womack Army Medical Center.

“I was re-assigned when the position came open. About two and half years later, my wife became pregnant and she left the military. Two years later, she was pregnant again. I decided that due to family considerations, I should pursue a civilian biomed career. I did not re-enlist,” he explains.

Todd says that when his re-enlistment finished, the family moved to Anchorage, Alaska.

“While in Alaska, I worked as a biomed for Hill-Rom, the Alaska Native Medical Center and for Siemens Healthcare servicing lab equipment,” he says.

From the Cold North to the Volunteer State

Over the years, Todd has garnered more experience and training, both on-the-job and through formal training coursework.

“I very much enjoy working with laboratory equipment and while working at the Alaska Native Medical Center, was sent to RSTI and completed the four phases of radiological service training. I enjoy working on X-ray equipment as well. Most of all, I like the variety of working in multiple clinics and areas. You get to work on a large variety of equipment and systems. To me that keeps things interesting,” he says. 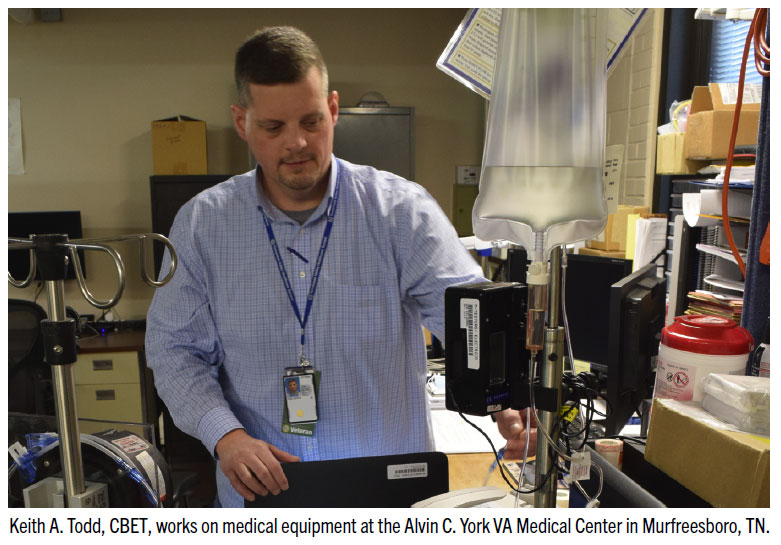 Todd has experienced a few challenges along the way.

“There were many challenges working in Alaska. The cold, traveling the vastness of the state to service medical equipment, getting parts and supplies, and even the time difference from the east coast when needing to talk to equipment manufacturers was often an issue,” he says.

At his current position, he says that he had to help stand up a COVID-19 wing of the hospital. He and colleagues are currently standing up a new outpatient facility in Chattanooga.

On the recognition front, Todd has received three Director’s Awards for outstanding service while working at the VA.

When not involved in biomed duties, Todd can be found enjoying outdoor activities like hunting, fishing, hiking and camping.

Faith and country are important foundations for this HTM professional.

“I have a deep love and appreciation for our country. I believe that our freedoms and liberties were granted to us by God almighty. Many citizens and those obtaining citizenship have sacrificed greatly for our country. We should be mindful of this and teach our children, not omitting any of it, while acknowledging God’s grace and mercy,” Todd says.

The veterans in Murfreesboro are in good hands with a fellow vet looking out for the medical equipment they depend on.