Professional of the Month Kenneth Shearer, CBET, CET: Supporting a Good Cause

Posted By: K. Richard Douglason: May 31, 2020In: Magazine, Professional of the Month, Spotlight
Print Email

New Jersey has been one of the hardest hit states in the COVID-19 pandemic. Many biomeds in the state saw their hospital’s resources tapped out. The proximity to New York City, and the impact on the entire East Coast, all contributed to the increased state of readiness required in hospitals throughout the state.

One of those hospitals is Deborah Heart and Lung Center in Browns Mills, New Jersey. The hospital began as a tuberculosis sanatorium and pulmonary center in 1922, so its experience with treating the lungs and the heart includes a long history.

Today, the hospital offers “leading edge surgical techniques and non-surgical alternatives for diagnosing and treating all forms of cardiac, vascular and pulmonary diseases in adults, congenital and acquired heart defects in adults and children,” according to its website.

It is the only cardiac and pulmonary specialty hospital in New Jersey.

Kenneth Shearer, CBET, CET, a BMET 3 in the hospital’s biomedical engineering department experienced the additional urgency brought on by the pandemic.

Shearer did not enter the HTM field directly, but spent time working on consumer electronics for several years as groundwork before entering the biomed profession.

“I came into the biomedical instrumentation field through the ‘back door.’ I was trained and CET-certified in electronics through a home study course and worked in consumer electronics for 10 years fixing everything from stereos, televisions, VCRs and microwaves to refrigerators and air conditioning,” he says.

Shearer says that he was fascinated with how electronics were applied to the health field.

“I started in consumer electronics, which was amazing, but seeing it applied to the health field to help with treatment and diagnosis is really something special. I’m still amazed and learning something new every day,” he says.

That consumer electronics experience was also what first got him into the door at a hospital.

“I was first hired at a hospital to fix and maintain all the televisions, the television system, pillow speakers, and security cameras and whatever else I could get my hands into,” Shearer says.

“My supervisor at the time offered a small clinical unit for me to take and I jumped at the opportunity. After a couple of years, I took on more responsibility and soon became a full-time biomed. I studied and learned everything I could and became CBET certified in 2010. I let that expire and took and passed again in 2019. I had some awesome coworkers that mentored me and challenged me to become better,” Shearer adds.

The many years in consumer electronics allowed Shearer to leapfrog into a BMET 2 position and then eventually become a BMET 3. He does not have a particular specialty, but describes himself as a “jack-of-all-trades.” 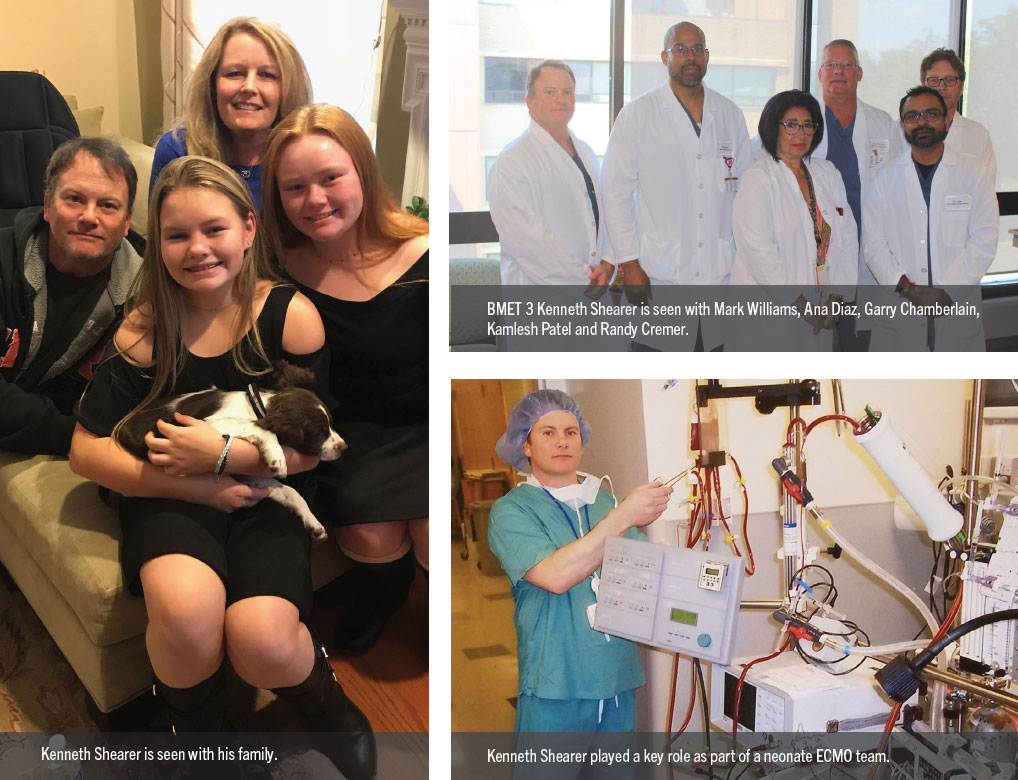 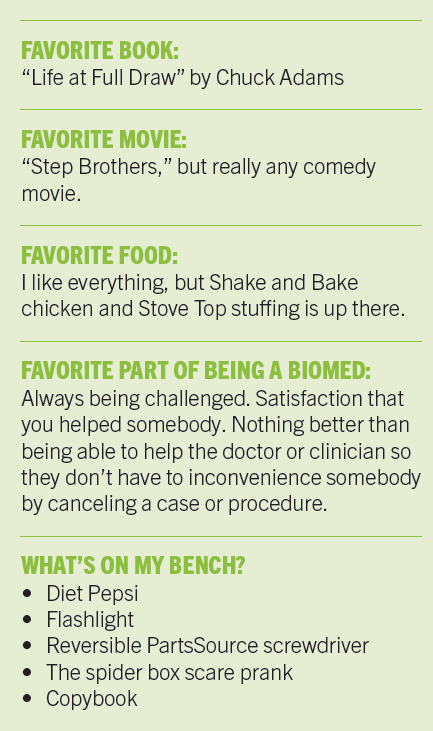 There can be no better way to spend time away from work than volunteering your time and skills. This pursuit has taken Shearer from New Jersey to Central and South America.

He helped out in all areas from transporting patients to running for supplies.

“I helped out wherever I was needed. I even helped the local biomed of the host hospital fix their equipment. I remember in Cali that they had a new C-arm that they couldn’t get running, and I was able to get it running by the end of the week. It was really great to be a part of those missions and seeing all those children with their new smiles,” Shearer says.

He says that he was also part of a neonate ECMO team.

“We would build the circuit in a sterile field. Then we would saline prime and then blood prime the ECMO circuit. We were responsible for making sure the ABG stayed perfect until the surgeon was ready for the circuit,” he says.

“We would move our cart into bedside position and then hand the lines to the surgeon for hookup. I was on call a lot and even missed my daughter’s birthday party one year as I was paged as we were leaving the house to go to it. The ECMO team was a great experience because we did more than the normal biomed work and duties,” Shearer adds.

“I love being outdoors, whether I’m coaching my daughters’ softball team, fishing, hunting or training our dog,” he says.

He says he has an awesome wife and two beautiful teenage girls and a dog; Hunter.