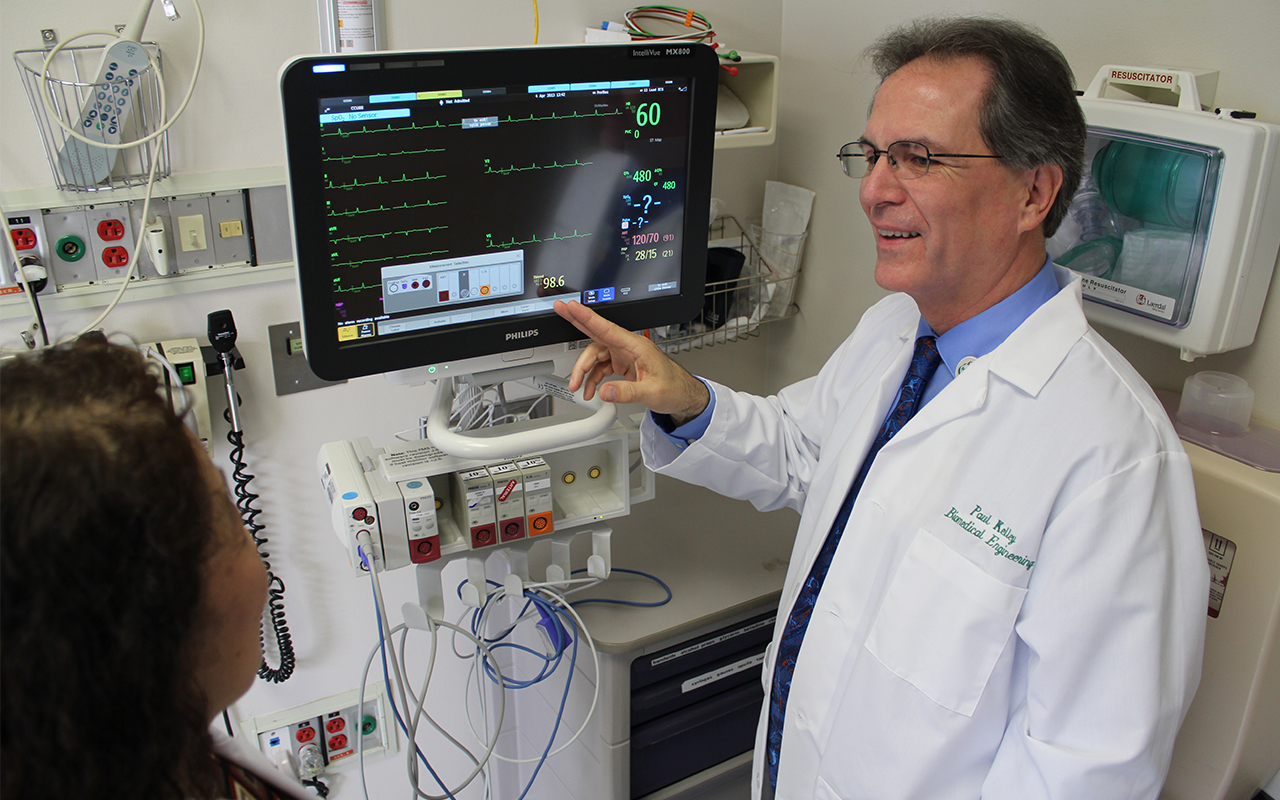 Posted By: K. Richard Douglason: September 01, 2017In: Magazine, Professional of the Month, Spotlight

While an environmentally friendly focus is the job of the whole community, health care facilities can play a more active role with the right leadership and direction.

Paul W. Kelley, CBET, is the director of Biomedical Engineering, the Green Initiative and Asset Redeployment at Washington Hospital Healthcare System in Fremont, California. Kelley has dedicated his interest in a clean environment to guiding his hospital’s response to helping the local community. He has led his hospital’s Green Initiative and Green Team since November 2007.

Working on the mechanical and electrical side of health care was not Kelley’s first ambition. He saw himself wielding a scalpel instead of a voltmeter before his college days.

“I always wanted to be a doctor – a surgeon actually,” he says. “In college, I had an identity crisis and decided that it wasn’t what I wanted to do. I didn’t want to be in school for half of my life, nor did I want to be on call 24/7. I took a career planning class, and was told about biomedical engineering technology. I asked; ‘Like with pocket protectors and tape on the glasses?’ I found a local community college that taught it, and never regretted it.”

“It turns out that I am always learning, and on call 24/7,” he adds jokingly.

“I graduated on a Friday, got married on Saturday, took a two-week honeymoon, and then moved to Los Angeles – 380 miles away – to put my wife through school. A few weeks later, I got a job inspecting pipe welding machines. About a month later, I received two offers for a BMET position. I took the one at UCLA Medical Center,” Kelley says.

“After my wife graduated, we moved back to the Bay Area. I took a temporary job at Santa Clara Valley Medical Center in San Jose, and that led to a 15-year permanent position. I received a call from Washington Hospital in Fremont (where I live) offering me to bring the department in-house. I took it (no commute) and have been there for 19 years now,” Kelley adds.

Kelley says that the challenges in HTM are one of the things that makes the field enjoyable. He has shown his resourcefulness and foresight in this regard.

“I was asked to make a device one time for a research project. This was back in the ’90s, I think. There was a doctor who wanted to make a device to passively exercise paraplegics’ legs. So, I built it for him. We took a rowing machine, placed magnets on it, and a TENS unit. The tens would fire, cause the legs to straighten, the magnet would turn it off, and the seat would come to rest. It would then repeat. He did his research and got it published,” Kelley says.

He also remembers another special project; which was successfully leading EQ89 to publication.

“Starting a standard from scratch is a very interesting, and a complicated process. I was also part of the group who renamed the profession to Healthcare Technology Management. I am currently the co-chair of the Supportability Task Force for AAMI,” Kelley says.

Fitness and creativity have been pastimes for Kelley, and these days catching up on his favorite team or race, are favorite pursuits.

“I love bicycling, and used to be an avid cyclist. I was trained in photography and had my own darkroom. I was doing a lot of stained glass, and had two commissioned pieces. Currently, I am more of a sports fan. I enjoy watching the San Jose Sharks, San Francisco 49ers and car racing, especially open-wheeled,” he says.

Kelley has been married to his wife Kathy for 38 years.

“She helps support our Vets as a Recreation Therapist for the VA,” he says.

His son, Aaron, is married and works with Salesforce, as well as being in a successful band (Phoenix Ash) that is signed in Asia.

His daughter, Shawna, lives in Los Angeles and works in movie production.

AAMI honored Kelley with the organization’s BMET of the Year award in 2011. Kelley has also twice been president of the Bay Area Chapter of the California Medical Instrumentation Association (CMIA).

His foray into environmental concerns in the health care environment began when he went to a workshop about e-waste in hospitals in 2007.

“I reported the results up to administration. It turned out that our CEO had put The Green Initiative on the institutional agenda for 2008, and I was tapped to lead it. In those days, the organization that evolved into Practice GreenHealth was funded by an EPA grant. Once it became a membership-based organization, we applied and became a very early charter member,” Kelley says.

When he started his hospital’s Green Team, it evolved into including members from almost every area of the hospital.

The initiative has had great success with meaningful results.

“One was implementing reusable sharps containers. This program eliminated 9.1 tons of plastic from the incinerator,” Kelley says. “Another big, and very effective project, is our ‘Let’s Go Green Together’ Earth Day event, that we partner with the City of Fremont. It is a one-day educational and fun event that draws about 1,000 people.” Kelley says that the Practice GreenHealth awards application is very thorough.

“The application takes months to fill out, and many different people have to provide input. They look at all kinds of areas. Their main chapters are leadership, waste, EPP, energy, water, food, chemicals, greening the OR, climate, and green building,” he says. “The questions are not just to collect data. They are also to help with a self-assessment process, and each year they ratchet it down by adding items and pushing the envelope as technology and ideas change.”

“I am very happy that we have won seven years, and this year we not only won the GreenHealth Partner for Change, but also the Greening the OR for the first time. These truly do take a village, and while I lead the efforts, it is definitely not just me,” Kelley says.

The efforts have led Kelly to be appointed by the Mayor of Fremont to the Environmental Sustainability Commission as its business representative.

What TechNation readers should know about Kelley; “I am passionate – and a perfectionist – about what I do, and I love giving back. If I can inspire just one person to step up and get involved, I will be happy,” he says.

This biomed director has made much happen by being involved himself.