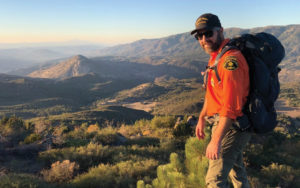 If it weren’t for volunteers, society would suffer. Volunteers fill in the gaps and provide the additional resources often needed to accomplish important tasks. Few undertakings are more important than finding someone who is lost or providing aid after a disaster. This effort often relies on the talents of trained volunteers to supplement the work of full-time professionals.

Anthony Rubino, a medical device network risk manager for Scripps Biomedical Engineering, part of the Scripps Information Services Team in San Diego, California, has been a member of the San Diego County Sheriff Search and Rescue (SAR) for five years.

“Originally, I learned of the organization through one of my fellow biomeds but later found several other Scripps employees were also members including our CEO, chief medical officer, a vice president and multiple directors. It turns out Scripps has a very strong relationship with San Diego County Sheriff Emergency Services as a leading health care provider should. I found involvement in SAR to be the exact mix of physical and mental challenges I craved,” Rubino says.

He says that when he first joined, he completed a four-month academy where he was certified as an emergency medical responder and taught land navigation, man tracking, rope rescue skills, radio communications, helicopter operations, evidence collection and more.

“I had familiarity with some of these topics from time I spent in the U.S. Marines but the quality of training in the SAR academy improved my skills beyond anything I possessed previously. In the years since the academy, I’ve responded to all kinds of searches from missing dementia patients in urban environments to lost backcountry hikers. Including the occasional mutual aid request from other California counties. Most notably, I spent two weeks in Paradise and Magalia, California, searching for remains after the 2018 Camp Fire,” Rubino says.

He says that as with most SAR organizations in California, “we are all volunteers, we pay for our own equipment and donate our time all in the interest of helping our neighbors at a time when they need it most.”

An Important, But Difficult Task

One of the worst disasters to hit California was the Camp Fire, which was ignited on November 8, 2018, and was the state’s deadliest wildfire. It lasted for two weeks and resulted in the deaths of 86 people.

“The San Diego County Sheriff responded to a mutual aid search and rescue request from Butte County in late 2018 as a result of the Camp Fire. I deployed twice, one week before Thanksgiving, then another the week after. When we arrived at the operating base, I was struck by the scale and complexity of the operation. It was the largest and most complex non-military camp I had ever witnessed. There were hundreds of volunteers from across the country operating out of a camp with everything needed for support: advanced communication systems, gas stations, laundry facilities, portable showers, medical, headquarters, supply, and dozens of temperature-controlled tents for the teams. It was a fully functional, self-sustaining portable village,” Rubino says.

Rubino says that as impressive as the operation was, it paled in comparison to the magnitude of the fire’s destruction.

“During my deployment, I received assignments in both Magalia, California, and Paradise, California; two communities that were almost entirely reduced to 18-inches of debris in the wake of the fire. Our primary objective was to locate human remains. A surprisingly difficult task given some of the hazards we encountered. First and foremost being the condition of, not only the structures we searched, but what remained of the large trees in a heavily forested community,” he says.

Rubino says that the fire moved quickly through the area, but tree roots could continue burning for days afterward, leaving large trees ready to topple without warning.

“Before we could set foot on any property, we had to survey the utilities to ensure there was no unsecured electrical or gas being supplied. Typically, we would get a warning if electrical was expected as the utility provider was working on the system, but gas was frequently provided by on-site storage. The structures themselves, as piles of debris, presented their own hazards as we had to remove what remained of roofs and walls to gain access,” Rubino adds.

He says that in some cases, they had to coordinate with deployed National Guard units operating heavy machinery to lift intact portions of structures away from the search area.

“We could then sift through several inches of ash for evidence of the occupants. The first week I spent in the area was hot and dry. Sifting through the debris caused clouds of ash to blow through the air. To protect ourselves we had to search while wearing personal protective equipment: helmets, goggles, bunny suits, respirators and fireproof boots. It was miserable work. The second week there was rain which turned the ash into thick sludge. I’m not sure what was worse, working in the heat or digging through the sludge,” Rubino adds.

While Rubino has participated in important volunteer work, his vocation also provides important benefits, managing risk as a cybersecurity expert.

“Professionally, I’ve been working for Scripps Health for 20 years. In the beginning, I was strictly a preventative maintenance technician as I worked my way through college. When I finished college, I realized I enjoyed biomed and applied for a full-time position. At Scripps, I was permitted the freedom to pursue my professional interests which resulted in the creation of a hybrid biomed equipment technician and network engineer role,” Rubino says.

He says that the role was called biomed clinical system specialist.

“Eventually, I took a position as a lead biomed for one of our teams and was later tasked with managing implementation of device integration with our EMR as Scripps rolled out Epic over the course of a few years. In recent times, I have moved into another new role for our organization, medical device network risk manager, where I am responsible for building and managing the organization’s medical device cybersecurity program,” Rubino adds.

While helping out the sheriff’s department or protecting his employer’s network, this HTM professional has found ways to help out colleagues, patients and his fellow state residents.