A Workable AEM Program: Getting the Basics Right 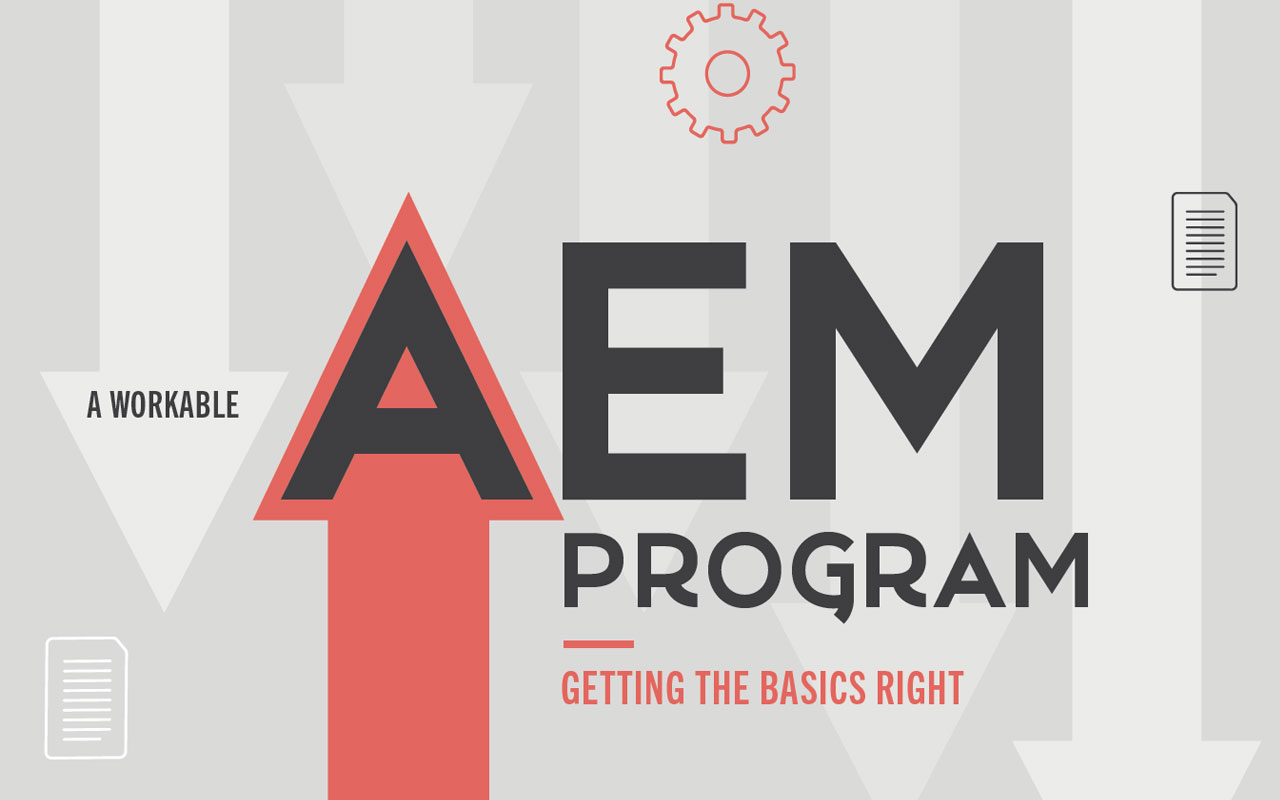 Uncertainty is bad for the stock market and not something HTM professionals want either. When it comes to PM schedules, for instance, every HTM professional wants to know what the accepted standard is. If there is a standardized approach, so be it, but if it is an approved alternative, then spell it out.

In 2013, with the release of a memo by the Centers for Medicare and Medicaid Services (CMS), Survey & Certification (S&C) Letter S&C:14-07-Hospital (Hospital Equipment Maintenance Requirements), the idea that AEM programs could be an alternative to manufacturer’s recommended maintenance schedules was born.

But the discussion goes back to 2010 when The Joint Commission (TJC) and CMS met. CMS asked that TJC surveyors scrutinize the effectiveness of maintenance strategies more closely.

The premise was that upon scrutiny, the program, its procedures, and documentation, could be carefully outlined and defended as well thought out, comprehensive and evidence-based.

In short, if a surveyor was the prosecuting attorney and the judge, the defense would mount a case that the judge would agree with.

A more recent AAMI article stated that a recurring theme from The Joint Commission was “the importance of healthcare technology management (HTM) departments having documented, defensible evidence supporting their equipment management strategies.”

Building Blocks for a Successful Program

To begin a new AEM program, or review the components of an existing program, it is necessary to include several elements for success. There are also practices to avoid.

Nanney emphasizes that you “do not include imaging, laser or other specifically regulated devices.”

“Review Mean-Time-Between-Failure (MTBF) to determine PM frequency and a review of patient incidents work orders,” as well as a “review [of] work orders flagged PM Preventable,” he says.

Nanney says that if an HTM department does not have an existing AEM program in place, the starting point should be, “after completing a batch of PMs, ask the technicians what they found that was PM preventable and what was useless or redundant,” he says.

He says to analyze work orders to see if they support the technician’s findings. Use that data to adjust PMs.

While Nanney cites some of the desirable best practices to follow in establishing an AEM program, Baretich describes those practices that should be avoided.

Not including all aspects of PM. “PM (planned maintenance) includes activities to reduce the likelihood of failure, such as replacing batteries before they fail. But PM also includes inspection activities to discover latent failures the user may be unaware of, like defibrillator output testing,” Baretich says.

Not measuring PM program performance. “We don’t want our AEM program to reduce equipment safety, so how do we know? There’s a growing consensus that we should be proactively measuring and monitoring PM-related failures (including latent failures) that could be averted by better PM,” Baretich adds.

Not establishing and sustaining CMMS data integrity. Baretich also points out that those who establish an AEM program are “going to be making critical data-driven decisions, so we need good data. We need to clean up existing data, adopt good data hygiene to keep it clean and do regular data auditing to check for deterioration.”

There is also the perspective of the vendor that produces CMMS software, with an eye on compliance.

What is their take on establishing an AEM program?

“First, HTM leaders should attend seminars to ensure they completely understand AEM. Also, AAMI sells an AEM guide that provides detailed information on the AEM implementation process. Being educated on the subject by doing these kinds of things will make you more confident in your decisions,” says Rich Sable, CBET, product manager at EQ2 LLC.

“Second, HTM leaders should create the policy and procedures for the organization’s AEM program, and make sure that their CMMS can retrieve the metrics outlined in the policy easily, especially if HTM leaders need to present them to a regulator during an inspection. For instance, EQ2’s AEM dashboard is continuously checking live data for updates to metrics in the database that would be part of the AEM policy, like equipment history, failure rates, device years, etcetera,” Sable adds.

He says that finally, you should identify all the “taboo” devices that should not be placed into an AEM program such as medical lasers, radiologic and imaging equipment, and high-risk devices.

“Once those items are identified, you can move on to the other inventory items for evaluation for AEM eligibility based on the metrics outlined in your organization’s AEM policy. It is important to remember that you must not reduce the safety or reliability of any medical device placed into an AEM program,” Sable says.

As Nanney also suggested, Sable says that as a final best practice, the HTM leaders can involve the EOC committee in approving and understanding the reasons that the organization is adopting these alternative strategies. This also serves to add organizational acceptance of the program which may prove to be beneficial during a regulatory inspection.

What has EQ2 learned while developing software/dashboard for this kind of program?

“Like many HTM standards, the rules are continuously evolving, and it requires effort on the software vendor to be in close contact with their customers and to attend AEM seminars and conference sessions provided by both AAMI and MD Expo,” Sable says.

“Also, as new metrics are revealed the software dashboard must be updated to reflect those new metrics used in applying an AEM program: for example, adding corrective maintenance history and device years to the interface. Consequently, we have learned that you cannot stand still and must continuously respond to changes to the program and requirements,” Sable says.

Blanchard and his department’s experience is instructional.

“When we first entered into the AEM program, we knew that several steps needed to take place first. First, we needed to right-size our 20,000-device inventory. It is difficult to understand what devices you want to add to the AEM process if you don’t have a good grasp of what’s in your inventory,” he says.

“For example; a printer with a model number ‘PRN 50’ needs to align perfectly with what the manufacturer has named it. It cannot be ‘PRN-50’ or ‘PRN50.’ Otherwise, we would have had multiple model records for the same model. This is a giant step and one that took time. Once we had a good clean inventory, we took the next step and listed devices that have a factory recommended or required PM against those that do not,” Blanchard says.

He says that once complete, they then developed a flow chart to help decide what devices they could include in the AEM program.

“We realized that the WakeMed clinical engineering technicians were the best suited to help us decide what devices should and could be included in the program. The technicians were to modify the maintenance procedures and create standard checklists that were included in the model record for each device in our CMMS. These checklists cannot be modified at the technician level and have fields that need to be completed in order to close the PM work order. This helps keep the modified PM standard across the board for all techs,” Blanchard says.

He says that at this point, they felt they had established a strong AEM program at WakeMed.

“However, we quickly realized that we needed to track not only device repairs for trending issues but, patient risk and impact. We developed a three-question survey that is mandatory to fill out as the CMMS will block the tech from closing out the work order if they do not enter the answers, and is part of every work order generated (scheduled and non-scheduled). The answers are only ‘yes’ or ‘no,’” Blanchard says.

He says that each question, in a normal circumstance, will receive a “no” answer.

“However, if someone were to answer ‘yes’ to any of the questions, it will flag the work order and we will then have a chance to look into the issue right away. So, instead of lagging metrics and looking at data that happened in the past we have developed leading metrics and can find issues in real-time to help prevent duplicate incidents,” Blanchard adds.

He says that similar to the three AEM questions, they also make it mandatory to fill in a field regarding patient impact. The five choices to the “Patient Impact Level” question are:

1) No Impact to Patient,

3) Patient In the Room (we believe this is a patient satisfier issue. No patient or family member wants to know that a device we hook them up to might not be working properly and was that issue caused by AEM),

Baretich says that a year ago if a Joint Commission surveyor asked if you have an AEM program, many HTM professionals thought the safe answer was “no, we follow OEM recommendations.”

“Now, if that’s the answer you give, the surveyor is likely to say ‘Why not? An AEM program is best practice,’” he says.

“The Joint Commission’s position on AEM focuses on the ability of a health care organization (HCO) to use the tools of an AEM program to work smarter, reduce harm, increase reliability and maintain safe operation of medical devices,” says Thomas Todro, engineer, standards interpretation group, engineering at The Joint Commission.

“There has been very little change regarding our position in the last two years. The Joint Commission, when surveying an HCO’s AEM strategy, is looking for documented, defensible evidence that supports the alternative equipment management strategies being used,” Todro says.

He says that for organizations looking to implement an AEM program, we recommend first starting with EC.02.04.01 EP 6, which addresses how the medical equipment is used, including the consequences of equipment failure or malfunction, including seriousness and prevalence of harm to the patient or the operator.

Todro says that there are several key considerations when devising an AEM program. Among them is:

“The hospital is expected to adhere strictly to the AEM activities or strategies it has developed. ‘Strict adherence’ is generally interpreted by CMS to mean completing 100 percent of the activities in a frequency identified by the organization,” Todro says.

Todro says that TJC considers a well-developed AEM strategy as a way of achieving “zero harm to patients and high reliability,” as well as a tool that clinical technology management departments can use to demonstrate their quality maintenance management system.

“There are several organizations that have implemented effective AEM strategies and key to their success was analysis of data, well-written implementation plan and periodic monitoring of the failures for the devices under the AEM,” Todro adds.

How Do You Make a Program Defensible?

Blanchard says that WakeMed has been on the AEM journey since 2014.

“During this time, we have not seen an uptick in medical equipment-related patient or staff injury. Patient and staff safety is our number one goal, as it is for everyone who works at WakeMed or in any health care system. So, I can end on that note,” he says.

“However, fiscal responsibility is also a big goal for any health care system in this day and age. AEM has not only helped reduce patient and staff injury but has also saved us a huge amount of money by allowing us to decide what safe maintenance looks like on our devices. We can use third-party vendors and ISOs for parts and service. We don’t need to utilize much overtime to get the last-minute devices completed before the end of the month deadline,” Blanchard adds.

He says that tracking the fiscal impact is one metric he would urge anyone on the AEM journey to track.

“We, unfortunately, did not start tracking this until much later into the program. We have also freed up labor hours for our staff to work on improvement projects throughout the shop and hospital. Are we Maytag Men napping and twiddling our thumbs? No, not yet. There is always more than enough work to do. However, AEM definitely helps to feel less constrained and managing your work seems just a bit easier,” Blanchard adds.