Posted By: TechNation Development Teamon: May 04, 2016In: Industry Updates, Magazine

It’s important to dream big, but it’s best to start small. That’s the philosophy AAMI is embracing as it hammers out the details of an interoperability demonstration scheduled for its annual conference this June.

The three-day program, tentatively titled “Interactive Systems: An Interoperable Experience in Patient Safety,” will focus on how interoperable equipment can facilitate patient care in the emergency room environment. The idea, says Wil Vargas, AAMI’s director of standards, is to make interoperability “seem more tangible, so that it’s less about all of these complicated concepts and more about something” biomeds can relate to professionally.

The demonstration will revolve around an ER vignette, he says, “right at the start of the patient journey, where the ambulance is coming in with medical information and devices” and first responders are interacting with hospital staff. Participating vendors will work together to show how interoperability might play out in such a scenario, and will stress how seamless communication can lead to improvements in patient safety.

“From AAMI’s perspective, we really want to make it clear to those in attendance that for us interoperability is about the patient experience,” Vargas says. “From the moment they enter the emergency room, it’s about making sure we’re doing everything possible to increase their chances of going home safely.”

Next year, Vargas adds, AAMI plans to host a similar demonstration that includes not only the ER, but also an operating room. “And then in 2018 we’ll expand it even further,” perhaps to the recovery room or the intensive care unit.

“Our plan is to grow it every year to show yet another stage in the patient care journey,” Vargas says.

AAMI’s decision to go with a vignette-style demonstration follows last year’s “AAMI HIMSS Interoperability Showcase,” an event Vargas says “allowed us to get our feet wet” by working with an organization “that has a very big presence in the interoperability space.” The two groups considered collaborating this year as well, but in the end determined it wasn’t to be, “mainly because we have different interests.”

HIMSS is focused on Integrating the Healthcare Enterprise profiles, Vargas explains, while AAMI’s interoperability-related work revolves around standards that ensure patient safety, “but not exclusively through IHE profiles or any specific concept.”

Vargas says their split from HIMSS was “not a divorce, but more an amicable separation—you know, ‘thanks for the lift, we’ve got it from here.’” 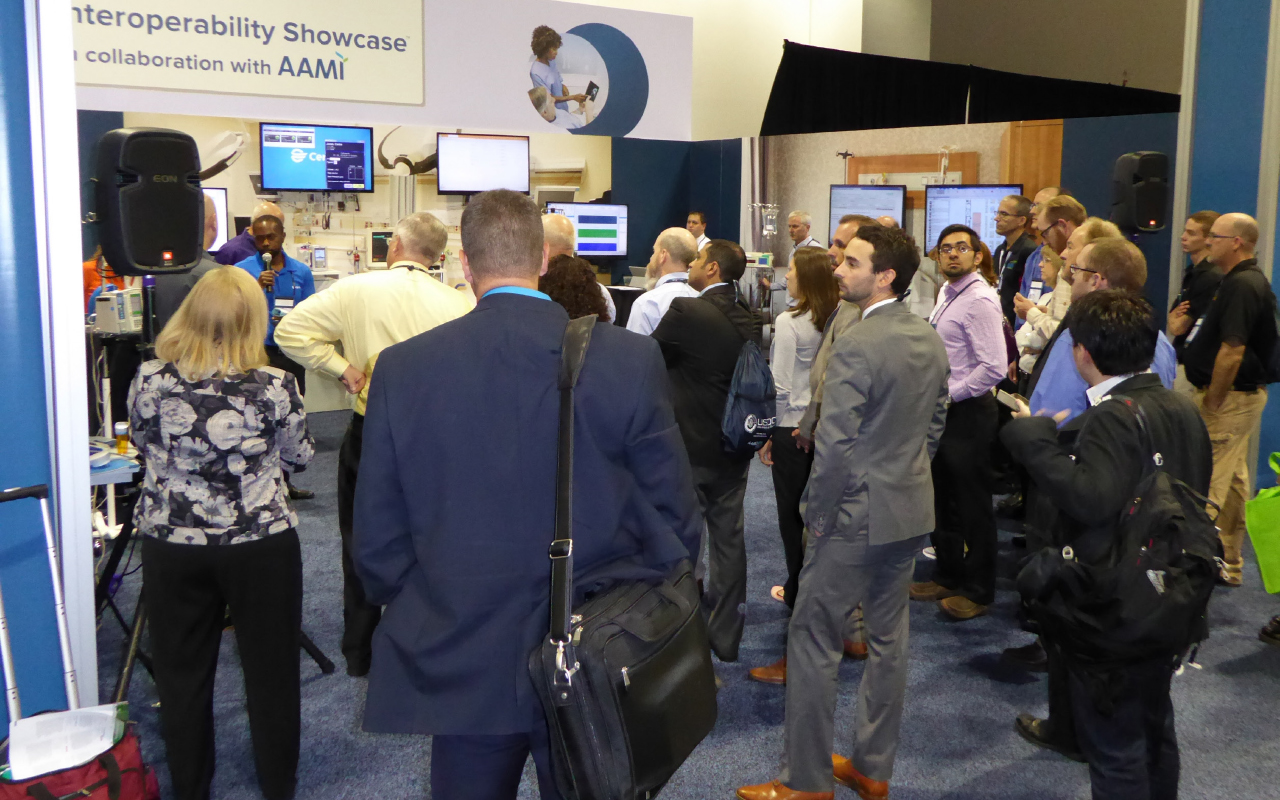 Interoperability is always a popular topic at the AAMI conference.

One of the reasons Vargas and his colleagues are confident they can stage the demonstration on their own is the fact that they’ll have help from Manny Furst, PhD, CCE. Furst, who’s played a pivotal role at past interoperability events through HIMSS and at AAMI conferences alike, was until recently the technical project manager for IHE’s Patient Care Devices domain. He’s also been among the strongest advocates in the industry for achieving interoperability in the hospital environment.

“From my point of view,” Furst says, “a demonstration like this is a unique opportunity for anyone who manages clinical technology. You can actually talk to the guy who wrote the program that makes that device interoperable,” and find out exactly how that interoperability “might be relevant to your own situation.”

Interoperability, Furst adds, has come a long way in the last decade or so since he started consulting for IHE.

“One of the biggest things I’ve noticed is how these intense competitors in the marketplace” – companies like GE and Philips and many others – “are really cooperating” to make interoperability a reality. “The fact is, if you’re a hospital, you can go out and buy things like infusion pumps and vital signs monitors” that no longer require intermediary systems to communicate effectively with the EMR.

“That’s huge,” Furst notes, “not only because it improves safety and workflow, but also because in the long run these interoperable systems can save you a lot of money.”

Paul Sherman, CCE, FACCE, who took over Furst’s management role at IHE, agrees. Thanks to advancements in interoperability, he says, medical devices are becoming “more and more capable of checking themselves” and then communicating their findings to the CMMS, for example.

“The problem is that most CMMS vendors have not caught up. We have equipment that can provide testing information, and potentially reduce the need for biomeds to run out and do PMs, but the CMMSs just aren’t there yet,” Sherman says.

In his opinion, Sherman says, health care is making progress toward universal interoperability, “but not as much progress as I would have hoped. We’re getting close, but there’s still work ahead.”

A Matter of Time

Yet another group that is focused on that work is the Center for Medical Interoperability in Nashville, Tennessee, where Kerry McDermott, MPH, is vice president of public policy and communications.

“You walk into any hospital in the country, and they’re all having the same exact problem,” McDermott notes. “They can’t get their technologies to integrate in a plug-and-play way.”

The solution, McDermott says, will certainly involve standards and the concerted efforts of industry groups like AAMI and HIMSS, but it will also require that health systems themselves step up and articulate their requirements to vendors. Toward that end, she says, CMI is building a lab at its headquarters that will serve as a kind of “vendor-neutral focal point” where engineers and others can come together to design, test, and ultimately certify easy-to-implement interoperability solutions.

“If you’re a health system CEO, you’ll know that the technology you’re about to buy is going to work safely, securely, and as expected,” McDermott says.

The lab, McDermott notes, should be completed by the end of this summer – after the AAMI demonstration is over, but well before next year’s conference rolls around. And once it opens and everyone gets to work?

“The plan is to tackle this issue at scale,” she says. “We definitely have a lot to do, but I have no doubt that we can eventually get there. If anything I think that interoperability is at a tipping point – it’s really just a matter of time.”