Association of the Month: The Armed Forces Biomedical Society (AFBS)

Posted By: TechNation Development Teamon: December 01, 2021In: Association of the Month, Magazine, Spotlight 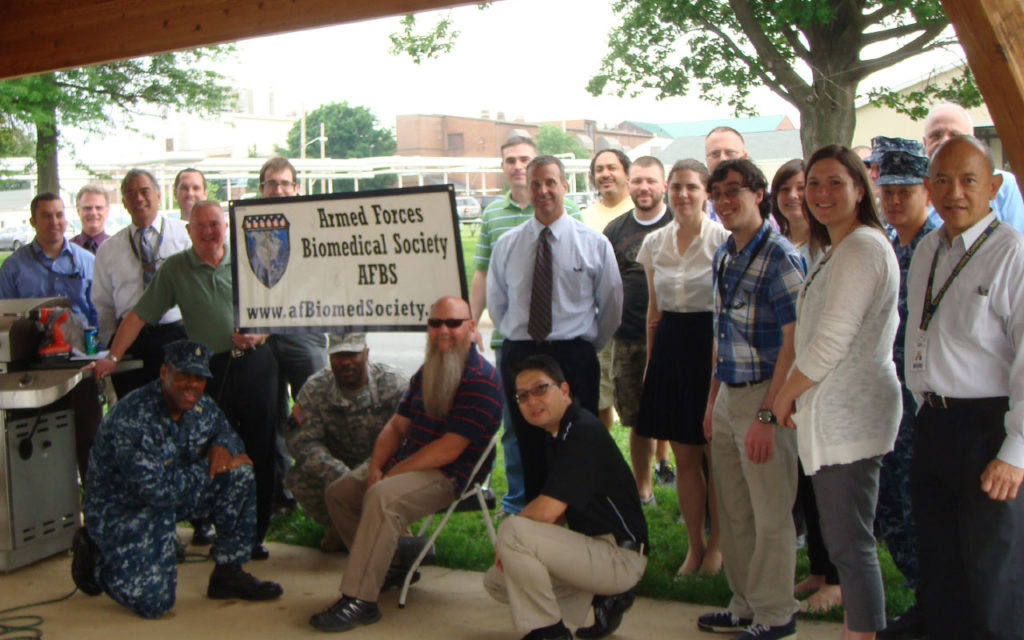 The biomed community has always been dependent on the large contingency of Department of Defense-trained biomeds who can be found in every health care environment nationwide. The military’s training includes an intense program, split up into two parts, and the opportunity to work on some of the most cutting-edge equipment available.

Before 1999, the BMETs from the U.S. Navy and U.S. Army trained together at Fitzsimons Army Medical Center in Denver. The Air Force BMETs trained at Sheppard Air Force Base in Wichita Falls, Texas. At the end of that year, the programs were consolidated.

In 2005, the BMET program was relocated to Joint Base San Antonio-Fort Sam Houston. The deadline for the program at the Medical Education and Training Campus (METC) to become fully operational was in September of 2011. The first METC BMET class started in August of 2010.

Military-trained biomeds have a common experience that further binds them. It was only natural then that they should have a biomed association that is focused on their common training, vernacular and mission.

“A couple of us came up with the idea to form the AFBS. As you may, or may not know, Fort Detrick, Maryland is the home for medical logistics. Inherently, there are a lot of biomedical equipment specialists/technicians and engineers (biomedical) in the area. Following guidance from an old AAMI ‘How to Establish a Society’ guide, I knew we had the people. The first step was to find out if they would be interested in supporting such an organization,” says Gomez-Morales.

Gomez-Morales says that everyone he reached out to at the time said that they would support the society.

“Next came finding a name that was encompassing of all the service branches. We finally decided on calling the society the Armed Forces Biomedical Society. The rest is history; I became the first AFBS president. We all get along at work, but there is always a feud about which service branch produces the best ‘BMETs,’ ” Gomez-Morales jokes.

He says that the initial goal was to establish a forum and resource for the active Army Reserves and National Guard military biomedical equipment specialists/technicians. He says to note that he uses the words “specialists and technicians” because there are different titles depending on the service branch (i.e. Army, Air Force, Navy … ) so that experiences and professional development requirements can be shared.

“We thought we could make a difference because there was no such thing as a biomedical society who catered to the U.S. military. Previous to the COVID-19 pandemic, we always had an excellence attendance record to our meetings. Each meeting was structured to provide some type of training, or medical application presentation of the latest medical device technology in the market. Fast forward 11 years, we still have active society members but have not met since COVID-19 started back in March 2020,” Gomez-Morales says.

He says that he really has to thank the AAMI guide for establishing a society because it provided all the information and methodology for the AFBS to get started.

“I cannot believe the AFBS is going to be 11 years old come October 2021 and folks are always asking me when are we going to have our next meeting,” Gomez-Morales says.

A Focus on Members

AFBS’s key priorities have changed some since the group was conceived, but the focus remains on its members.“Our initial intention was to mentor and help young military biomedical equipment specialist/technicians network with the medical industry as they were beginning their careers in the military,” Gomez-Morales says.

He says that the group sponsored (with the help of CABMET) a no-cost online study groups for members.

“We have contributed to the AAMI Scholarship Fund. We give away AAMI memberships. The most important contribution is the camaraderie that is developed between the various generations of equipment specialist/technicians from the different services. It is amazing to see how many people come to our AAMI exchange booth. We always have people because our paths have crossed, or simply because the individuals have served in the military. It is amazing to see how much impact the military has in the flow (employment) of HTM professionals,” Gomez-Morales says.

The group doesn’t yet have a formal symposium and because of some factors that are unique to the group, hosting such an event may prove to be a real challenge.

“We have not been able to establish a regular interval for a symposium, but had coordinated meetings-gatherings a few times during the normal AAMI exchange events, or local government vendor events. This is something that we would like to do, but there is something unique about the AFBS when it comes to our members’ locations. Most of our members live or work all over the world. We have a core membership from the national capitol region, but most of our members are remote. Again, we take advantage of the AAMI meetings to gather the ‘troops’ (for a lack of a better word),” Gomez-Morales says.

The group’s normal annual conference involvement with AAMI was disrupted by COVID-19.

“This year’s conference was virtual, so it was difficult to contribute. However, I was able to present (on behalf of the Army) information about ‘Repair parts planning and management.’ I believe every time the military hears that there will be a presentation (with a military spin) there are always a few folks that attend just to support,” Gomez-Morales says.

One of the most important roles of biomed associations and societies is to play an active role in bringing new biomeds into the field to replace the retiring baby-boomers. AFBS is doing its part by allowing new biomeds to see the role that the more veteran biomeds in the group play.

“We have a multi-generation membership base that consists of brand-new recruits to the crusty old technicians that have been around since vacuum tubes were still being used in medical devices,” Gomez-Morales says.

He says that one of AFBS’s goals has been to provide a forum for the “young blood” coming out of their basic biomedical equipment school (training).

“As they see how well some of us have adjusted to society, it becomes an incentive for them to join HTM as technicians and managers. I think we play an important role in providing a ‘role model’ for how they will become when they retire, or leave the service,” Gomez-Morales says.

What military-trained biomeds have shown to the field is that they are role models in many respects and it is only fitting to have a biomed society focused on them.