Posted By: TechNation Development Teamon: October 01, 2021In: Association of the Month, Magazine, Spotlight 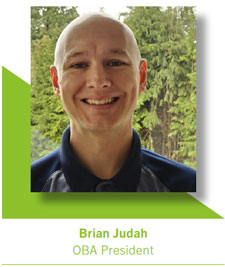 Mapped by the Lewis and Clark expedition in their search for the Northwest Passage in the early 1800s, Oregon was added to the map officially and became a state in 1859.

It was 126 years later that the state’s biomed association was officially registered with the state in 1985.

The Oregon Biomedical Association (OBA) has been a resource for HTM professionals across the state of Oregon ever since.

“At that time, the association’s registered address was at the Douglass Community Hospital in Roseburg, Oregon and was called the Cascade Biomedical Association. The Oregon Secretary of State document shows the president at that time to be Thomas Wickesser and the vice president as Jerry Worobey. The name of the organization changed in 1994 to the Oregon Biomedical Association but shows dissolution of the association in 1997,” says Brian Judah, current OBA president.

Judah says the OBA transitioned to the Portland area and has been meeting since about 2003.

“J.R. Reis was the president and James Steinbrink, with Samaritan Health, was the secretary. The meetings never really stopped, but the business was no longer registered with the state during that time. Valdez Bravo took over as president in 2012 after Reis had served more than a decade. The reinstatement of the OBA by the state of Oregon occurred in 2013,” he says.

He explains that within OBA, the term for any officer position is a two-year commitment.

“We have found this helps prevent burnout and gives other members a chance to be a part of the leadership and mentor other members in business operations. When elections occur, we also can add up to six board members. The board members assist the officers in their duties. Board members serve a one-year term to allow them an opportunity to see if this is something they want to pursue. Oftentimes, this leads to many board members running for, and taking, officer roles,” Judah says.

He says that the group currently has two executive board members and is always looking for more to assist and hopefully take the reigns as officers when positions become available every two years.

The pandemic threw a wrench in the meeting schedule for the group, as it did for so many of their counterparts, yet the OBA adapted to the new normal and persevered.

“Typically, in the past – pre-COVID – we held meetings in person only, usually every other month. Meetings were held at different hospitals around the Portland metropolitan area, as well as reaching out to areas like Salem and Southwest Washington,” Judah says.

“With COVID restrictions, we were hit hard in the beginning but are doing well after a revamp of our toolkit and keeping the same schedule, but in a webinar format. We hold the same meeting twice in the same day to allow lunch time attendees from 11:30-12:30 and repeat the meeting in the evening from 6:30-7:30 p.m. to get to those who cannot pull away for an hour during the day,” Judah adds.

The OBA has teamed up with the biomed program at its local community college to help bring insights from HTM professionals.

“The OBA has a special relationship with Portland Community College (PCC). OBA officers typically speak to both the first and second-year students, encouraging them to join the OBA to expand their knowledge outside of school and to provide greater networking opportunities to gain a visual presence with members working in the field; many of which are recent graduates,” Judah says.

He says that once a year, when possible, the group likes to hold an in-person meeting in one of the fantastic conference rooms PCC has available.

“PCC, being centrally located to a lot of hospitals and clinics in the area, attracts not only all the students but many imaging and biomedical technicians and local leadership from the hospitals and clinics. This last year, the OBA was invited to be a part of PCC’s EET advisory board, that helps guide decisions for the biomedical program,” Judah says.

While many annual conferences and symposiums had to be put on hold in 2020, the association did hold its annual expo in 2019.

“In 2019, we had 30 vendors from across the U.S. present their specialties at our expo; one of our largest events yet. Thanks to then OBA President Peter McNamara; he did an outstanding job of coordinating this event,” Judah says.

He says that for the past six years, the expo has been held at the Portland Holiday Inn-Portland airport.

“This is a centrally located area close to the airport, allowing easy access and shipping for each of the vendors. It is also easily accessible for the Portland metro/Southwest Washington area, as well as being accessible to all that Portland has to offer for those that are visiting from out of town,” Judah says.

The group’s expo is offered over two days and is free to members.

“Typically (Thursday/Friday), this helps allow for HTM professionals to be staggered and help manage their workloads, allowing attendance for as many as possible, while not leaving any shops vacant. Our training courses consist of vendor-provided education as well as local HTM professionals, who share their vast knowledge on various modalities,” Judah says.

He says that each day consists of nine daily training/educational courses. Three simultaneous courses are provided during each time slot, allowing participants many topics to choose from.

“The day starts with check-in at 7:30 a.m. Oftentimes, a guest speaker in the morning for the first 30-60 minutes with a light breakfast, followed by two more hour-long educational tracks,” Judah says.

He says that by then, everyone is hungry.

“Next is lunch that includes a two-hour meet and greet with all the fantastic vendors from approximately 11:30 a.m. to 1:30 p.m., so you can connect with each of your local reps and find answers to any of the questions you may have about any of the latest technologies. At 2 p.m. is the last educational track. The day ends at about 3:30 p.m. with door prizes and final ceremonies by 4 p.m.,” Judah says.

After the first night of the expo, the group has a two-hour sponsored cocktail/appetizer networking opportunity from 5-7 p.m., followed by a repeat of the expo on the second day.

“If you are feeling adventurous, many guests often head out to see what other attractions/activities Portland has to offer,” Judah adds.

With much to offer biomeds, and others in the field, the OBA is blazing new trails much like Lewis and Clark did many years ago.