Posted By: K. Richard Douglason: May 01, 2019In: Association of the Month, Magazine, Spotlight
Print Email

Virginia is a state that offers almost everything; scenic mountains, the ocean and lots of history. The state has beaches along its east coast and mountains in the west. It was the home of James Madison, George Washington and John Blair. It is the place that saw the end of the Civil War in Appomattox and Madison’s Virginia Plan was the basis for the U.S. Constitution.

The tourism marketing slogan, “Virginia is for Lovers,” is iconic.

Besides being the state for lovers, Virginia is a state full of HTM professionals from the Alexandria area down to the border of North Carolina; from Virginia Beach to Blacksburg. They are found in urban and rural areas and many of them are united by their state’s professional HTM association; the Virginia Biomedical Association (VBA).

“The Virginia Biomedical Association was officially started in 1994 with its first annual meeting and election of officers and a board of directors,” says Richard “Rick” Davis, who heads the group’s finance review committee and has been the association’s treasurer.

“Planning sessions for that first meeting began in early 1993 and lasted almost the whole year. Attending the planning sessions were managers, directors and service technicians representing hospitals and service providers throughout the state. From the Tidewater/Eastern area were Mary Coker, Virgil Smoot, Mark Freeman, Kevin Breen and myself,” he adds.

“From the Western area were Steve Haupt, Ben Clark, Michael Carlton and Lee Gilley and from the Northern area was James Anderson,” says Lee Gilley, who has been a member of the association’s board of directors, along with Davis.

Davis says that prior to the launch of the VBA, there was another association in southeastern Virginia.

“In the 1980s, there was a regional association called the Tidewater Biomedical Association that lasted for several years, but was too small to sustain itself. In 1993, we got together and acquired backing from Hewlett Packard (which is now Philips) and General Electric’s medical equipment division. They helped immensely the first years with classes and financial donations,” he says.

According to Davis, the prime movers in the new association were Mary Coker, Steve Haupt, Ben Clark, James Anderson and Virgil Smoot.

“They had attended the AAMI conventions and North Carolina Biomedical Association meetings. They saw that we needed a state association here in Virginia. They were all in their department’s management so they knew the need for education on the local level. Mary Coker became our first president; she had worked her way up from a technician to manager at Riverside Health System,” Davis says.

Many of the early participants already knew each other and were already exchanging the kind of information that benefits members in biomed associations.

“We all knew each other and helped each other with troubleshooting tips, equipment issues, service manuals and even parts over the years before 1994. If we could get service schools here in Virginia, it would lower the cost of travel and lodging. Mary and Steve were very active at AAMI in the biomedical section of that association. At the time, they helped AAMI have a little more focus on biomeds,” Davis says.

He says that initially, the VBA planned two major meetings a year. A winter meeting held mostly at the Wintergreen Ski Resort for a little fun, an equipment class or two and The Joint Commission update, which was the major focus of the winter meeting. TJC was changing their inspections almost yearly.

“Most of our hospitals earned three-year accreditations, so this helped to keep us up to date. With better communication from CMMS, TJC and then subsequently DNV, on their updates and changes, the attendance for this meeting fell and the winter meeting was suspended and a larger focus was directed at the VBA annual meeting,” Davis says. 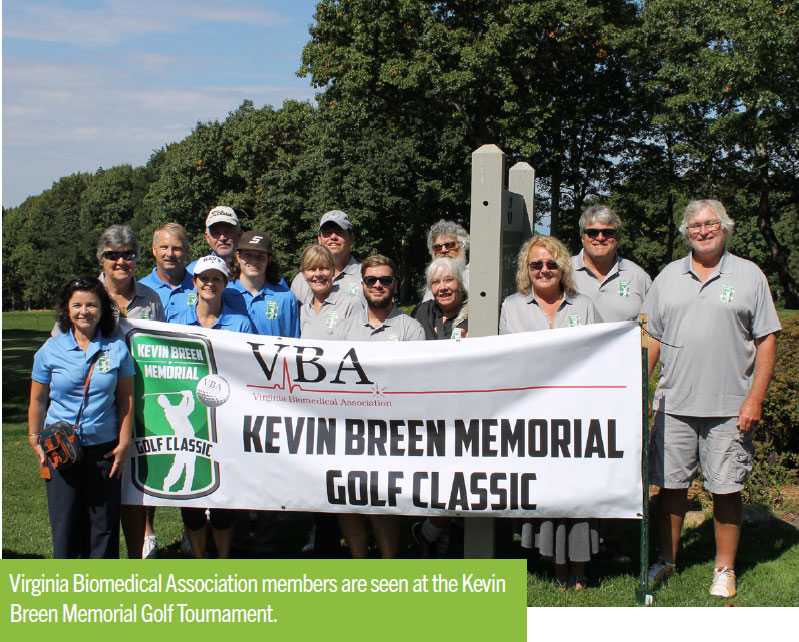 An annual conference or symposium is always an opportunity to provide members with benefits and to get the statewide membership together. The VBA is no exception.

“Initially, the annual meeting location changed every two years to try and accommodate attendees from different parts of the state. After evaluation, the board decided to utilize a single location,” Gilley says.

“This allows better use of members’ dues by cost savings in long-term contracts and eliminates a lot of the planning logistics involved in moving to a new location. The annual meeting currently is held in September and is at the Wintergreen Ski Resort in Wintergreen, Virginia,” Gilley adds.

He says that the schedule is golf on Wednesday with classes and vendor time on Thursday and Friday.

“Wintergreen is a great resort to visit, even in the fall. Hiking and golfing are their main focus during this time. Remember to bring a lot of balls as the mountain top courses can be challenging,” Gilley suggests.

“Education is the main focus. Acquiring classes and planning the annual meeting takes a lot of our time. We also add some relaxing and networking parts to our meeting. We start with the Kevin Breen Memorial Golf Classic on the first day. We follow that with a, hopefully, short board of directors and officers meeting, followed by a dinner with a speaker or some entertainment. The next day is registration and the official start of the meeting,” Davis says.

“We start with a keynote speaker followed with vendor (expo hall) time. Lunch is combined with our business meeting followed with more classes. We end with more vendor time, vendor reception, dinner and entertainment. In the evening we have had casino nights, corn hole tournaments and even magic tricks. The last day is more vendor time and classes,” Gilley says. 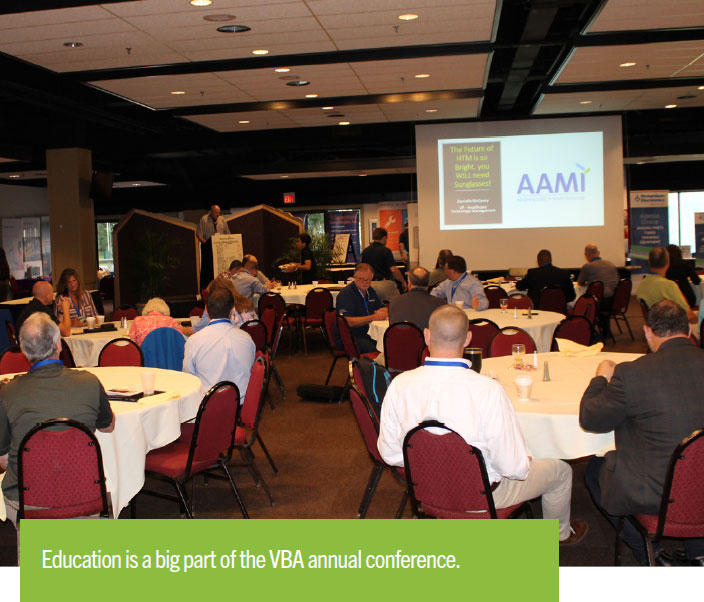 “The breakfasts and lunches are held in the vendor room along with the vendor reception to maximize the time with the vendors. The vendors are served their lunch during the last half hour of class time so they are free to be at their booths,” Gilley adds.

For biomed associations, much like employers, the retirement of baby boomers means locating more prospective working members. In one portion of Virginia, that challenge has been tempered somewhat.

Associations often also maintain a relationship with a technical school or community college to provide assistance or to source new members.

“The VBA was partnered with ECPI for internships when it had campus locations in Virginia Beach and Roanoke with biomed programs, but has since moved it to North Carolina. Centura College is looking at starting up a program; several of our members have been in contact to help,” Davis says.

Virginia is for lovers and well-informed HTM professionals, especially those who hold membership in the Virginia Biomedical Association.

For more information about the VBA and its annual meeting, visit vabiomed.org.