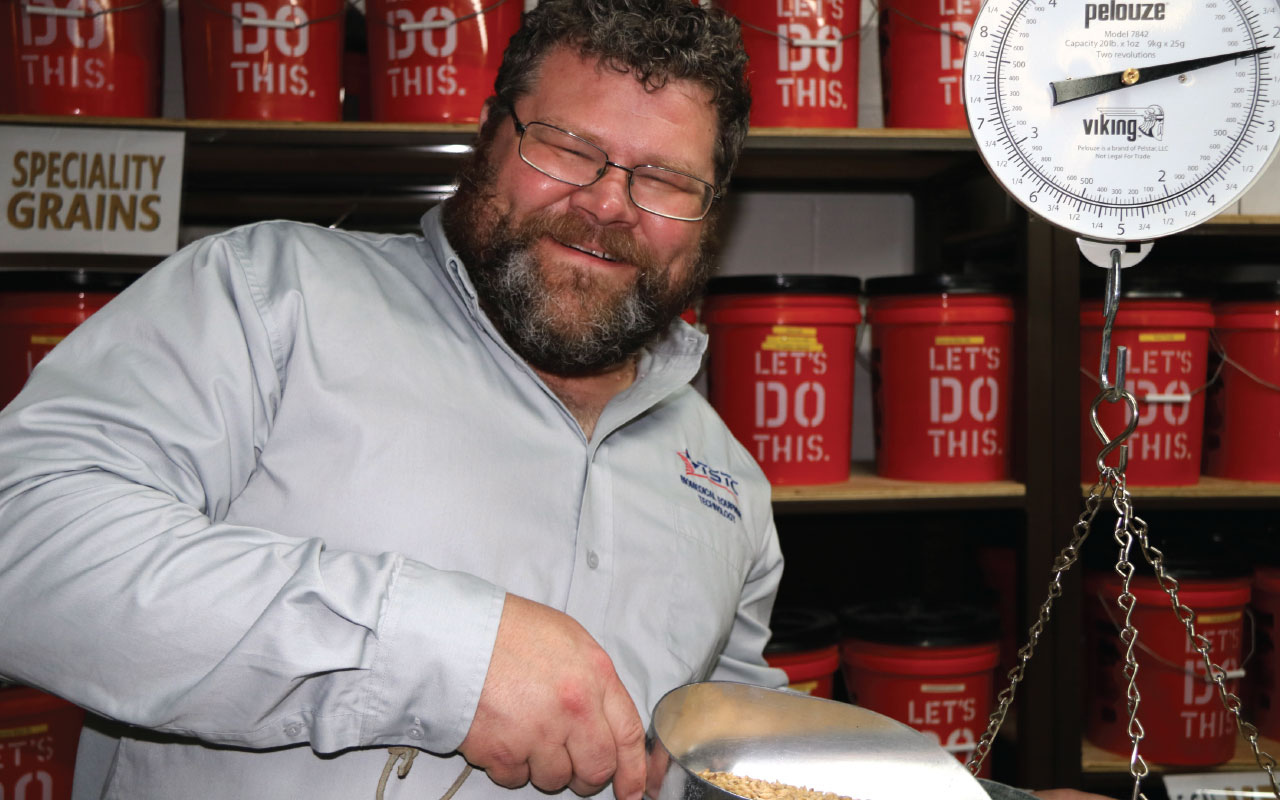 For many people, given a choice of hobbies, brewing your own beer would be near the top of the list. If you could turn that hobby into a side business, it might rank up there with sailing the Caribbean and photographing the Northern Lights. All three would qualify as very cool.

For Garrett Seeley, who is an associate professor of biomedical equipment technology at Texas State Technical College, it all started with a need for supplies for a beer-brewing hobby.

“My father, Glen Seeley, and I actually started brewing in the summer of 2015. We always did have a lot of hobbies together, and this one seemed like a natural way for us to work together on another project. We made an American Amber ale kit, using a recipe that is similar to one we now sell. It turned out great and that was what really sealed the deal for me,” Seeley remembers.

Garrett says that he realized, at that time, that he could do this.

“Those are very empowering words and it sort of propelled us forward. We started brewing regularly, about once a month thereafter. We formed a local club in 2016 with the local Karem Shrine — The Shriners — and became very interested in pursuing brewing socially. We joined the Waco Homebrewers Association that same year,” he says.

The need for supplies was the impetus that sparked that big step into opening a store.

“For the first year of our hobby, the only way we got brewing supplies was by either using the Internet or by driving to the nearest brewing shop, 50 miles away. In 2016, we discovered that there was a local brewing shop, and we were patrons of his store ‘Brewmeisters’ until it closed at the end of 2016,” Seeley says.

He says that the closing was a setback to the brewing community in Waco, Texas.

“It was at that point my friends and I in the Karem Shrine realized that we needed to make a local brewing shop. It really came out of a social club. We pooled our resources, bought out the local brewing store at the end of 2016. We then started to figure out how to open our own store. In August 2017, we had a property secured and we opened in October of that year. That is how the Craft Brewing Shop was born (craftbrewingshop.com),” Seeley adds.

Hanging out a Shingle

As Seeley explains, opening a brick and mortar shop is not for the faint of heart. There are many considerations, requirements and regulations that have to be met.

“The first thing people need to do is to get familiar with the several layers of laws, rules, and regulations of business. People are willing to answer questions, but they do not always volunteer additional or ancillary information about running a business. We had to have our business registered, make sure zoning was not an issue, learn all about the tax law, and constantly badger the city and county health departments about all the little ‘what ifs’ that we came across,” Seeley says.

He says that, to their credit, they were all very patient with the new brew shop entrepreneurs.

“They do want us to succeed and understand that we are just starting out. There are different regulations set at the federal, state, county and city level. All of these things have to be satisfied in order to be legitimate. In order to start a business, we had to ask questions of the government from the state level and below. We went online to see what the federal requirements were. Since we are in an industry with some federal regulation, we had to make sure that everything was legal with the feds,” he says.

“Yeah, all of this is needed just for a small ‘mom and pop’ shop,” he says.

“There is always one more person to hire to ‘help out’ the operations. Mind you, these people are just to support us on day-to-day operations of the store. However, all of these things are important and play a part of shop. This all runs outside of the product ordering logistics of the shop,” Seeley adds.

He explains that they then had to get everyone on the same page regarding the store operations. He says that this can be a phase that trips up many small businesses early on.

“Heretofore, I have been paying to go to work. We all have. The thought that we cannot get any income until we turn a profit does not always set well with everyone. All parties need to know that in the beginning, it is long hours for no pay. Also, creative differences can make enemies out of friends, so these are all reasons that early businesses fail. Make sure everyone is onboard with the goals before trying to get all of the operations set up. This is all stuff to get in place before even approaching payroll, which becomes a major federally legislated item,” Seeley says.

Long before teaching biomed, Seeley received his own initial training at the Army/Navy joint school (USAMEOS) at Fitzsimons Army Medical Center in Colorado.

“I was one of the last of the ‘Super Gs.’ I graduated at the end of 1995 and got a part-time job with Picker Healthcare Products while going to school for a BS-EE. I never did finish that degree as I met a great woman, got married, and got pregnant. We ended up taking a full-time position in Chicago. There I worked for Picker, then went in-house for Aramark/ ServiceMaster,” Seeley remembers.

“Eventually, I moved back home to Waco, Texas and took a position in radiology services with Hillcrest Baptist Medical Center. I was there until a teaching position opened up at Texas State Technical College in 2008,” he says.

“I did go back to school, finished a BAST degree in biomedical electronics, and got a MS in information systems. I earned the A+, Network+, and CBET certifications. I really never stopped moving forward with education until that MS degree. At that point in time, what I did had more weight than what I knew. Still, it is nice to have the professional credentials,” Seeley adds.

What advice would he give other HTM professionals who might be contemplating a side-business?

“Get ready for a lot of work for little pay. If you have a day job, understand that there has to be balance with the part-time business and the full-time job in order for this to work. Some people even go as far as to say that the best way to make it succeed is to pursue it full time. Luckily, two of my other partners do that for me. It’s important to have a team of the appropriate size to accomplish the goal. Keep them working toward that common goal,” he suggests.

He also brings a dose of wisdom to the table with this further suggestion.

“Bobby Knight said something to the effect of: have a goal, surround yourself with people who can achieve that goal, and keep them excited, but know they will only be as excited about the goal as you are yourself. That’s management 101, really. Opening a store will give knowledge in management through trial and error. We all make mistakes. They do not define us. They teach us. Good luck,” he says.

With that kind of perspective, it is a safe bet that the home brewers in the Waco area will have their supplies close at hand.