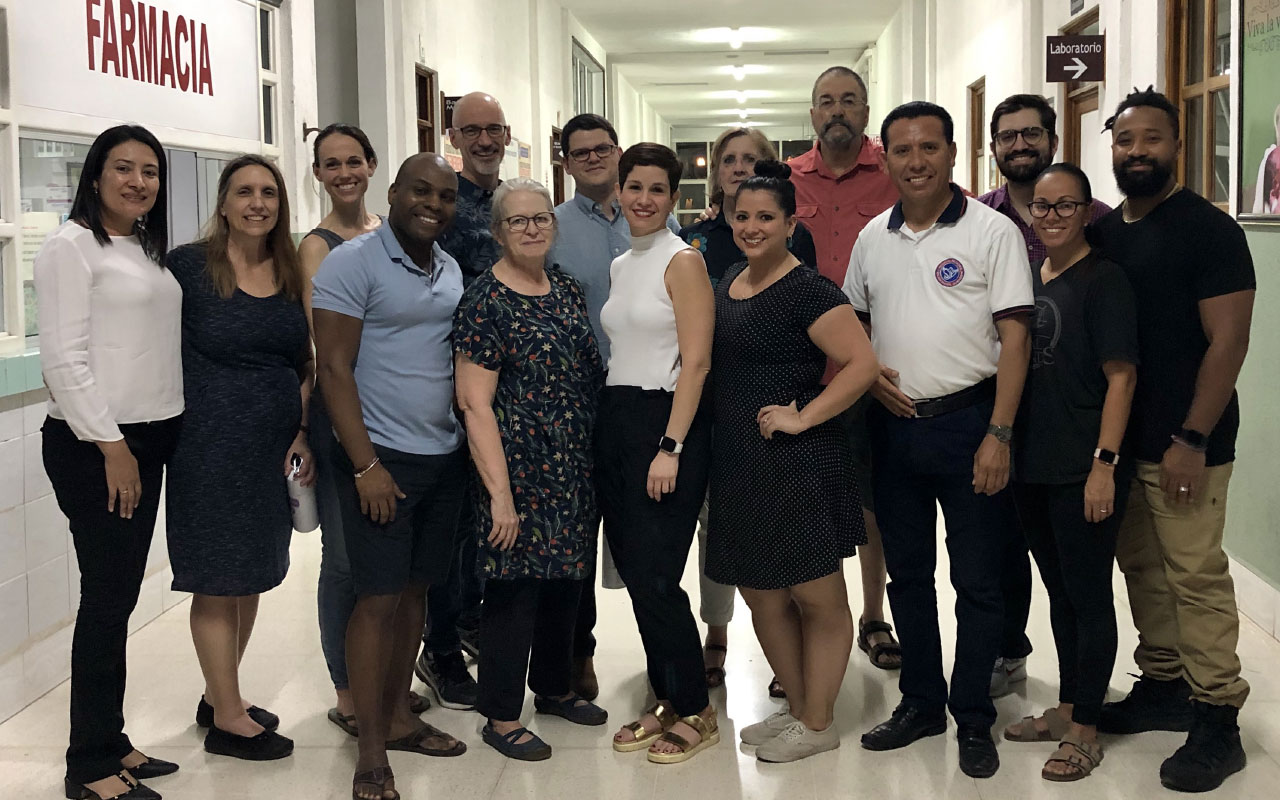 For many people in the developing world, the need for medical intervention might go unanswered if not for the donation of time and medical equipment by big-hearted clinicians and support personnel. Many of those volunteers come from the United States.

One recent example was a team of 14 who traveled to Jalpatagua, Guatemala in February to perform 76 surgeries over the course of five days. Among the volunteers was a surgeon, residents and other core members, but the 2020 trip was the first one to include a biomed. 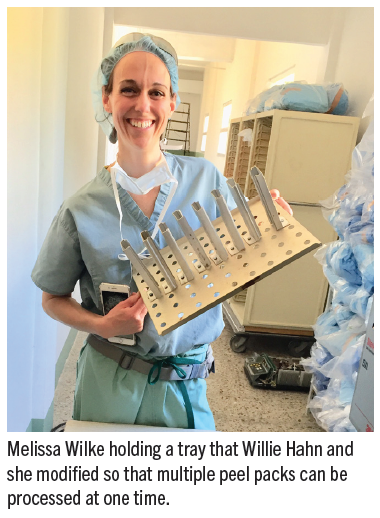 Melissa Wilke, CBET, a clinical engineering specialist at Gundersen Health Systems in La Crosse, Wisconsin, was the first HTM professional to join the group on one of its trips to Guatemala.

“I was chosen to come on this trip by surgeon, Dr. Dave Rowekamp, who started this annual trip 11 years ago. Dr. Rowekamp is a retired surgeon from Winona Health. He would often stop in throughout the year to pick up donations for the mission trip. I was working as a biomed at Winona Health. My primary responsibility at Winona Health was supporting the OR. It was through the need of equipment evaluation and repair that Dr. Rowekamp’s path crossed into mine,” Wilke remembers.

She says that over the years, she would help repair and acquire equipment for Rowekamp to bring to Guatemala.

“At one point he told me, ‘When your kids get a little older, we could really use your help in Guatemala.’ He was patient while my expertise and kids continued to grow. Then, it came to be my time to join the team. It was with much excitement and comfort of knowing others that have gone before me that made my decision to go a little easier,” Wilke says.

Wilke says that there is another surgeon on the team who has been going on the trip for the last nine years.

“His name is Dr. Micahel Sarr from Mayo Rochester and he is extraordinary. Dr. Sarr and I only knew each other through email, text and phone calls before the trip. So, it wasn’t until we were in Guatemala that I could see how great he truly was. He and Dr. Rowekamp are both genuinely concerned for others and always put everyone else’s needs first. Unfortunately for this trip, Dr. Rowekamp had a family emergency and was unable to come,” Wilke says.

She says that Sarr and his wife had every detail of the trip planned out.

The team flew into Guatemala City, a more populace urban area and spent the night before heading out the next day to San Juan Bautista Regional Hospital in Jalpatagua.

“Once we left Guatemala City, road maintenance and rules of the road seemed to be non-existent. The drive from Guatemala City to Jalaptagua went from a massive city, with hotels and big box stores, to small, poor villages with houses that looked like they could crumble under a strong wind,” Wilke says.

She says that fruit stands were dotted alongside the road.

“Sometimes, there would be fried chicken being sold as well. The drive was also very scenic. Beautiful rolling green hillsides, coconut and avocado trees, sugar cane fields, it was magnificent. Again, I had the feeling of a child. I didn’t know where we were going, how long it would take to get there or what it would be like when we did arrive,” Wilke says.

She says that the hospital is one of four buildings laid out in a square with a beautiful, inviting courtyard in the center.

As the first biomed to make the trip, Wilke had to pre-plan based on the information she was given about what to expect.

“I had to bring everything I thought I would need to repair and test equipment. Bringing tools was no problem. It was the test equipment that was going to be the obstacle. Test equipment is expensive. Typically, most hospitals don’t have an extra ESU or flow analyzer laying around. Even if our hospital did, the equipment is too bulky to bring along. We each already had two extra suitcases full of surgical supplies. Which begs the question, how do you troubleshoot issues with questionable ESU output or anesthesia machine flow issues? Well, you do what you can with the experience and knowledge you have. Sometimes it’s enough and other times it’s not. And that’s just the way it is,” Wilke says.

She says that everyone on the team was already in the mindset; how can we get by to make this work with the little that we have?

“It is not the same level of expectation that it is back home in our ORs. Everyone knows we are working with equipment that may or may not be fully functional, but we still have to find a way to meet in the middle. Patient safety is consistently at the forefront of everyone’s concern and is never compromised. Still it is a situation that leaves you feeling helpless. To make me feel better, I started an inventory and noted what needed to be repaired or replaced. This gave me peace of mind to communicate back to the team to plan for next year’s trip,” Wilke says.

Beyond the challenge of questionable equipment, there were some other issues the team encountered.

“A challenge that we face in the OR is unstable power. There is a retired engineer that has also been going on this trip for the past decade, Willie Hahn. With his brilliance he started bringing voltage stabilizers to plug the ESUs in to. The ESUs are sensitive and would experience line fluctuations. This would cause the ESUs to fail and they would frequently replace them. Now that they had the stabilizers, the ESUs were going to be fine, or so we thought. The voltage stabilizer had 220 and 110 outlets on it and one of the nurses inadvertently plugged the ESU into the 220. The ESU started smoking,” Wilke says.

She says that, unfortunately, she wasn’t able to repair it because it melted several components.

“The team didn’t realize that the ESU was plugged in to a 220 outlet. So, when they got a replacement ESU, they plugged it into the same outlet. This time when they turned it on it just blew the fuses. We were able to go to a hardware store in Jutiapa – a town an hour away – to get replacement fuses. With the 220 outlets taped off and new fuses in the ESU, things were back on track,” Wilke says.

She says that a safety analyzer would have been useful on the trip.

“I did bring a multimeter and was able to check the ground on electrical cords. In turn, I replaced almost every cord I tested because they well exceeded 0.5 ohms. Another challenge was sometimes a fly would find its way into the OR. There were ants, flies and other tiny bugs in the ‘lounge’ as well. They all come in freely because there are gaps around windows. Also, the doors to the hospital are propped open letting in a wonderful breeze. And yes, even a bird or maybe a chicken finds its way in. It’s kind of a beautiful thing in a non-regulatory/compliant way,” Wilke adds.

The Need for Biomeds

Wilke says she is confident that a biomed will be a regular member of future trips.

“The benefits were evident every day. As biomeds, we are providing technical knowledge and sharing our expertise in our field. You are put in situations with a great deal of limitations that you have to think outside the box to resolve. Plus, being designated to tend to the equipment allows other team members to focus on their jobs and fulfill their expectations. Having a biomed on any mission trip is invaluable,” she says.

What are her thoughts on HTM professionals committing to this kind of experience?

“I would encourage anyone to be a part of a mission trip. It is an experience that will change you for the better. It’s like any new experience, there has to be a first one sometime so you might as well go for it. There are people and mission teams all over the world waiting for someone like you to help them,” Wilke says.