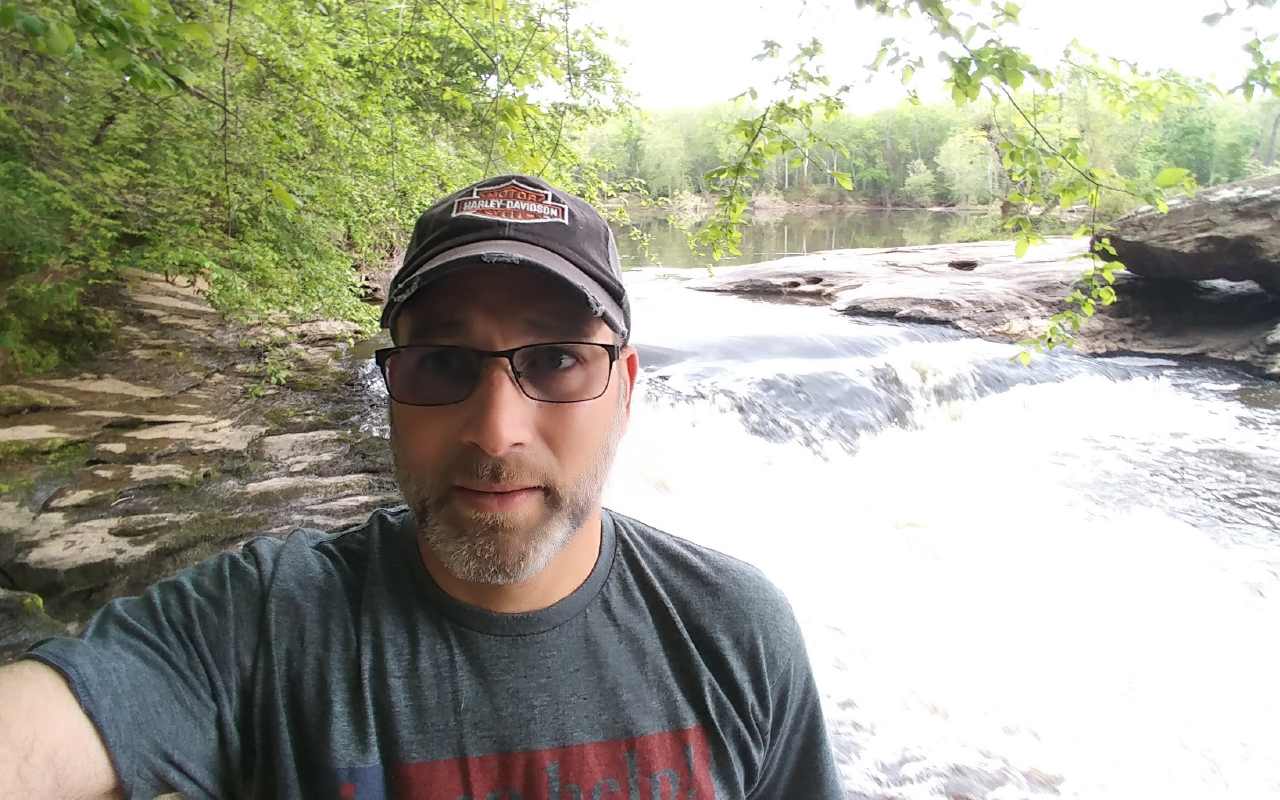 It is not uncommon for a doctor to suggest walking to a patient as a good form of exercise. The human body has acclimated itself to walking. It’s as much about getting out and moving, as it is maintaining the muscles that support the knees. Many people elevate this activity to get more cardiovascular benefit and take on running or jogging.

For those who want to add in attractive surroundings to their walking or running, many people choose to run or walk out in nature. There are trails for this purpose in federal, state and local parks across the country.

One of those hikers, who enjoys being out in nature, is James Kerner, CBET. Kerner works with ERP International LLC as a civilian contractor for the U.S. Army Medical Materiel Agency (USAMMA) in Fort Bragg, North Carolina.

“I started running early in my life and eventually learned the art of running during my 21-year military career. Running had become a daily ritual to relieve stress; starting my days early in the morning running three to five miles before work and sometimes after work. After suffering several lower back problems, running was no longer an activity that I was able to do anymore. I needed to find a ‘passion’ that would satisfy my desire for being outside while allowing me to push myself to the limits,” Kerner says.

He says that in 2016, he stated hiking after reading an article about the Appalachian Trail.

“I instantly was drawn to the love of being in the woods; experiencing the beauty that you can only find on a trail. Hiking allows me to be active, outside, and push myself to the limits without pounding my body like running was doing. When I am asked what has pushed me the most, I always compare these two achievements: In 2009 I ran the 26.2-mile Boston Marathon in Tallil, Iraq. In 2018, I tackled the terrain of the Sauratown Trail and completed the Make-A-Wish Foundation 26.5 TrailBlaze challenge. In the end, the 26.5-mile hike was definitely harder,” Kerner says.

Kerner says that he prepares for long hikes by studying the trail(s) that he’ll be hiking and also tries to find landmarks or points of interest either on or near the trails.

“It’s amazing what is hidden within local, state and federal land that you can see on trails. On some trails, you can actually piece moments of time back together and see the remains of old houses and communities,” Kerner says.

“A few days before distance hikes I start to hydrate and increase my electrolyte levels by adding NUUN tablets to my drinks. The night before the hike I carb up with pasta or pizza and stretch a lot. The morning of distance hikes I continue to stretch, hydrate and drink a large healthy vitamin packed smoothie to jumpstart my energy levels,” he adds.

Kerner says the greatest thing about hiking is that you can start out for relatively no money.

“Most people have everything they need around the house; all that is needed to start out hiking is a pair of shoes, a backpack, and a bottle of water. As you increase your interest and skill level, you can slowly upgrade and/or add to your equipment in very affordable ways. The best advice or tip that I can give others about hiking is to take time to slow down, breath, enjoy the scenery and hit a trail,” Kerner says. 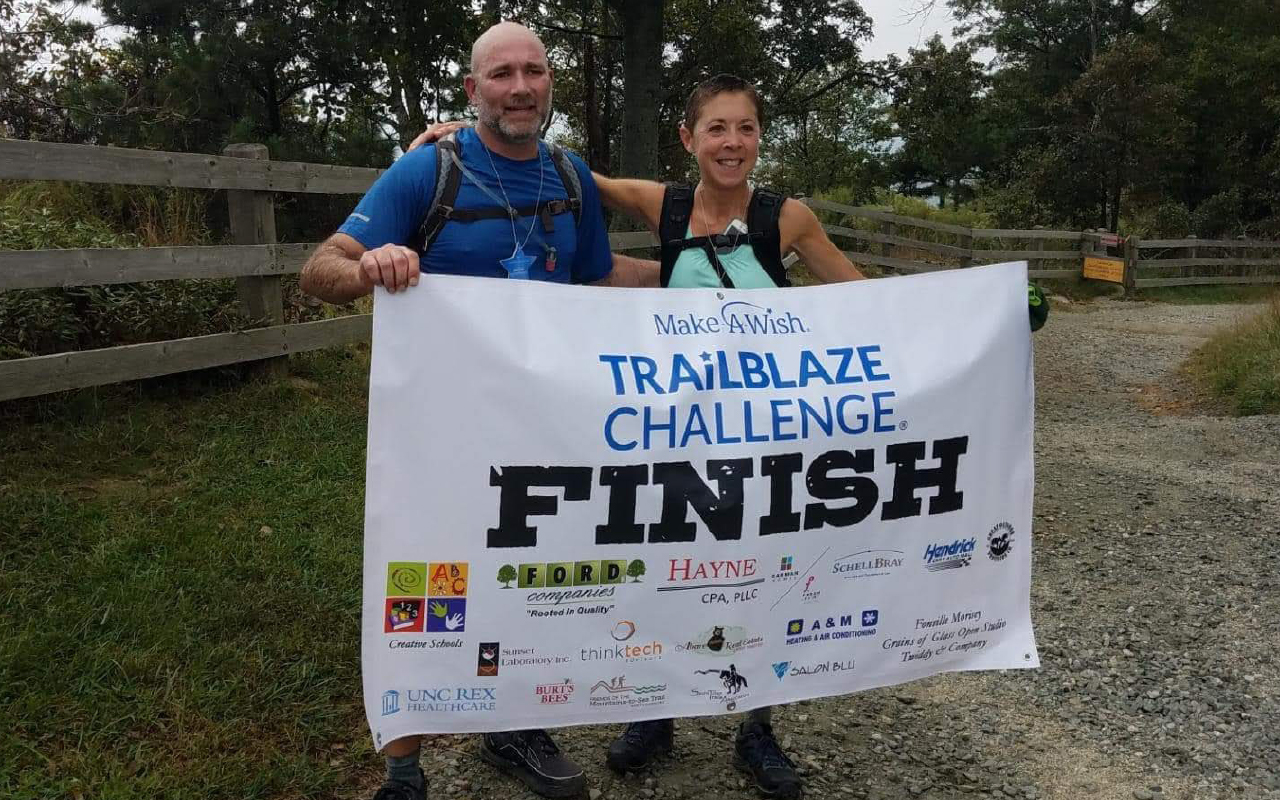 Hiking for a Great Cause

The Make-A-Wish Foundation works to bring some happiness to children diagnosed with critical illnesses by granting that child’s wish. The organization has granted the wishes of more than 315,000 children since 1980. Kerner recognized the good work the organization does and how his pastime could raise funds for it.

“Two friends of mine had children with life-changing critical illnesses and I followed their stories on Facebook. After donating money to their causes, I began to look for other ways that I could help children who are fighting for their lives,” he says.

“My search led me to the Eastern North Carolina Make-A-Wish Foundation Trailblaze Challenge, a 26.5-mile endurance hike where participants can tackle the terrain of the Sauratown Trail in one amazing day! After more research and my desire for helping children faced with illnesses, I decided to participate in the fundraiser and raised close to $3,000. Currently, I am registered to be a TrailBlaze lead on future hikes,” Kerner says.

Kerner has been a biomed since 1998 after graduating from the U.S. Army Medical Equipment and Optical School in Aurora, Colorado.

“Shortly after my graduation, I moved to the Fort Bragg, North Carolina area and began working at Womack Army Medical Center. In 2011, after an exciting and rewarding 21-year career, I decided to end my active and reserve military career and retired from the U.S. Army Reserves. As a BMET, I became AAMI CBET certified in 2010 and was considered a subject matter expert (SME) in imaging, being trained in radiology, CT and MRI,” Kerner says.

He is currently a BMET 4 Maintenance Readiness Officer-Medical for USAMMA and works as a link between the Medical Maintenance Operations Division and the medical operational forces (field medical maintenance assets) of the U.S. Army.

“In short, I am a medical maintenance analyst that provides technical support and guidance between USAMMA at the national level and medical maintenance field units at corps level and below. We are not considered a third-party entity, but a direct contractor with the U.S. Army embedded directly with active and civilian assets,” Kerner adds.

To children, who are uplifted because their wish is granted, he is also a source of funding for those wishes and a trailblazer.