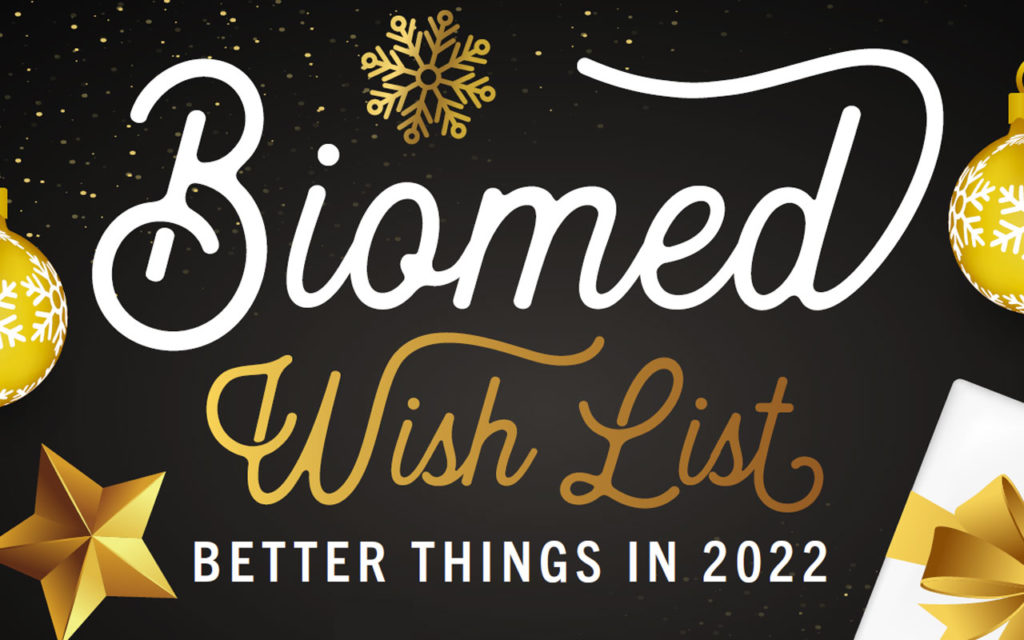 The economy in 2021 remained hampered by supply chain issues and travel restrictions from the previous year and unemployment had not returned to the historically low 3.5 percent of March 2020. The October jobs numbers were dismal. By mid-October, gas prices were up $1.11 year over year.

While the greatest hope for most people at the end of 2020 was that 2021 would be a better year, the jury is out. By most metrics, 2021 did not live up to hopes and expectations.

Thankfully, even with the Delta variant causing a surge in 2021, the COVID-19 trend in recent months has been downward and there have been fewer hospitalizations and deaths.

So, instead of bidding adieu to one bad year, it may be well worth throwing 2021 into the trash heap of bad years and move on.

One thing that is much-needed in the coming holiday period and the transition to 2022 is optimism.

Optimism that the United States population has finally turned a corner; that the combination of those who have acquired natural immunity from COVID-19, combined with those vaccinated, will give the nation’s people a true herd immunity. Optimism that the economy will start improving and that the inflated costs of many consumer staples will come back down in price.

In that spirit, TechNation gathered end-of-year wish lists from many biomeds and managers at a time when many are looking to 2022 and the future.

Some common trends emerged in the responses to requested wish list submissions. This is suggestive of a need for change in the field, standardizations and unshackling biomeds from restrictions. 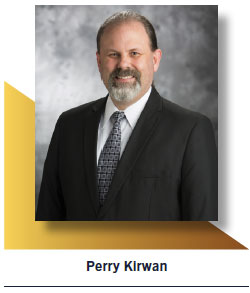 Management is very likely to have some different wish list items than technicians. One similarity though is that management’s wish list also benefits the biomeds in those departments.

“Our wish list would include, first and foremost, the stabilization of COVID-19. I don’t think there will ever be an end but clearly if we can get it to a point where it can be managed like flu – then that’s a win,” says Perry Kirwan, vice president of technology management with Banner Health.

Kirwan also has staffing items on his wish list.

“HTM is getting hit on all fronts – COVID burnout, COVID vaccine, the out-progression of people in our industry relative to new entries in, biomed schools shuttering and moving out of entire markets, and tight labor market in general,” he says.

His wish list also includes more training programs for biomeds all over the country and better-defined career paths for the biomed profession.

“I would like to have better technical and operator manuals, OEM online training and training support capabilities. I have many more wishes, but these are some of the basic ones,” says Diego Gomez-Morales, deputy director of Policies and Analysis Directorate Army Medical Logistics Command (AMLC).

Several former TechNation professional of the month feature subjects shared their wish list items, which most likely also make the short lists of their colleagues.

Tools will always be on every biomed’s wish list for utilitarian reasons. Some tools just have a more clever or practical design and others work as multi-use so that fewer tools need to be lugged around.

Former professional of the month Matt Neil agrees that you need the right tool for the job. Neil is a radiotherapy service engineer with BJC Healthcare.

“I think this is always important. Being able to go get the tool you need when you need it is huge. Previously, I would often do this and eat the cost due to the rigors of trying to get it approved on an expense report, or the delays in getting a new tool approved and ordered. This isn’t saying to open it up to buying anything and everything, but providing all the tools needed to do our jobs is vital. My pet peeve is seeing guys using a pair of channel locks to remove a bolt because they don’t have the right wrench,” Neil says.

A few different tools made past professional of the month Maggie Berkey’s short wish list. Berkey, CBET, is a senior BMET in the clinical engineering department for CommonSpirit Health’s Good Samaritan Hospital in Kearney, Nebraska and a member of AAMI’s Technology Management Council.

“Easy Out – I can’t tell you how many times I could have saved a lot of time and headaches if I would have had this day-saving tool. The Grabit Pro is the one I would ask for,” Berkey says.

She says that a multi-function pocket tool, like a Leatherman or a highly recommended tool that doubles as a belt buckle (the SOG Multitool Belt Buckle) for quick fixes when you’re on the go would also be on her short list.

“An electric screwdriver; I am asking Santa for the Bosch IXO 6,” Berkey says.

Many biomeds would just like to have more access in terms of right to repair or more dedicated space to do their jobs. These are common needs that benefit the biomed’s customers in the end. 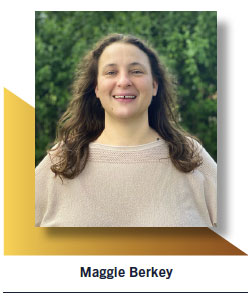 “A hospital I’ve worked at had some dedicated HTM shop/office space, but it was designed when the hospital was much smaller. Most of the techs work in areas that other departments have moved out of and have not yet been filled back in. They are constantly shuffling around different spaces within the hospital. It seems that precedence, often understandably, goes towards the hospital’s other more pressing needs. But having a permanent dedicated HTM space for all the engineers is needed,” Neil says.

Neil also has some wish list items for the entire HTM profession with the hope that some things will change within the field in the future. One of those is training.

“This isn’t an issue where I’m at now, but I know too often most of the training we get on equipment is on-the-job training, and often by just trial and error. Getting the resources to send engineers to schools, even remotely, to get equipment-specific training would advance our ability to keep equipment running properly,” he says.

Neil’s wish list also focuses on internships and the realities of having to replenish a shrinking workforce when other career paths are getting more attention.

“HTM as a whole has an aging workforce. I’d like to see more hospitals create internship positions, partnering with local colleges and trade schools to introduce young students into the world of HTM. Most young people I’ve dealt with over the years with interest in working with technology are going into IT. Let’s introduce them to this side of the operation as well,” Neil says.

Salaries that attract top talent was another of Neil’s wish list items for the future.

“When I was a manager of a clinical engineering hospital, I found lots of fantastic applicants for positions I had open. They would have really helped our team, but I was unable to hire them due to the wage scales. If we want to compete with IT, vendors and other industries, then the HR departments need to adapt to allow us to raise salaries and attract top talent. These investments will pay off by being able to do more and better repairs in house,” Neil says.

Dennis Duck, CBET, certified senior biomedical equipment technician with the healthcare technology management department at Baylor Scott and White Healthcare in Grapevine, Texas was a professional of the month in 2011.

Duck put the wish list question out to his team. He says that “the biggest response was additional technical (vendor) training. Especially during COVID-19, we have seen higher usage of critical care equipment and with that, more frequent repair requests and longer turnaround time for offsite vendor PMs of this equipment.”

Biomeds in Oregon provided their wish lists to the Oregon Biomedical Association. The comments of these biomeds from the Pacific Northwest reflect the wishes of biomeds everywhere.

One of those wishes was “more training opportunities at our facility or online; detailed and specific to repairs and PMs for OEM,AMD, AEM procedures.”

One biomed reflected on a wish of many for the mitigation steps to not have to be a concern anymore; “no more masks.”

Another Oregon biomed voiced a wish that other biomeds can understand. “Competitive salaries should be re-evaluated across industry averages every two years; not when it becomes a problem for the employer because you have too much turnover. Just because people stay does not mean they feel appreciated or paid what they are worth. Pay to surpass inflation, not just keep up with it or fall behind it. Two percent or less each year will not let you succeed and feel successful in our field. Salaries are not everything although top tier benefits help, but if you don’t have top tier benefits, higher pay is a must to compensate. More than two weeks PTO each year. Minimum four weeks for work life balance,” the biomed shared.

“A shared library of service manuals would be a great addition to help make repairs much easier,” was on another biomed’s wish list.

Education and funding were on the mind of another biomed who had career enhancement goals on the wish list.

“Higher employer education tuition reimbursement amounts. We have $2,000 per year but with most of us having two-year AA degrees, going back for your bachelor’s can cost $25,000 plus the interest on that loan cost, and the ROI pay you would need to advance to, could take you 10 years to pay back. How about $10,000 per year tuition reimbursement for BS degrees and dollars for masters.”

Although the right-to-repair laws are improving in several parts of the country, the movement still has a way to go and it is a sore point with many biomeds. It is no surprise that it makes many wish lists.

“Right to repair; march/strike. Stop the insanity and over-cost to our medical system for ridiculous prices on repair/replacement parts and the restricted information to repair manuals and schematic blocking from the manufacturers,” said one Oregon biomed.

That sentiment was reflected on another biomed’s wish list.

“Manufacturers need to supply for free the detailed PM procedures they use in their own repair facilities for all devices. No more ridiculous $14,000 PM for a cryo unit they won’t give you info on,” the wish list read.

Another biomed suggested the adoption of a trend that may get more attention nationwide in 2022.

And finally, another biomed’s wish was to return to normal; “in person meetings without restrictions.”

Here’s hoping for a better 2022 and the fulfillment of the wishes of HTM professionals everywhere.