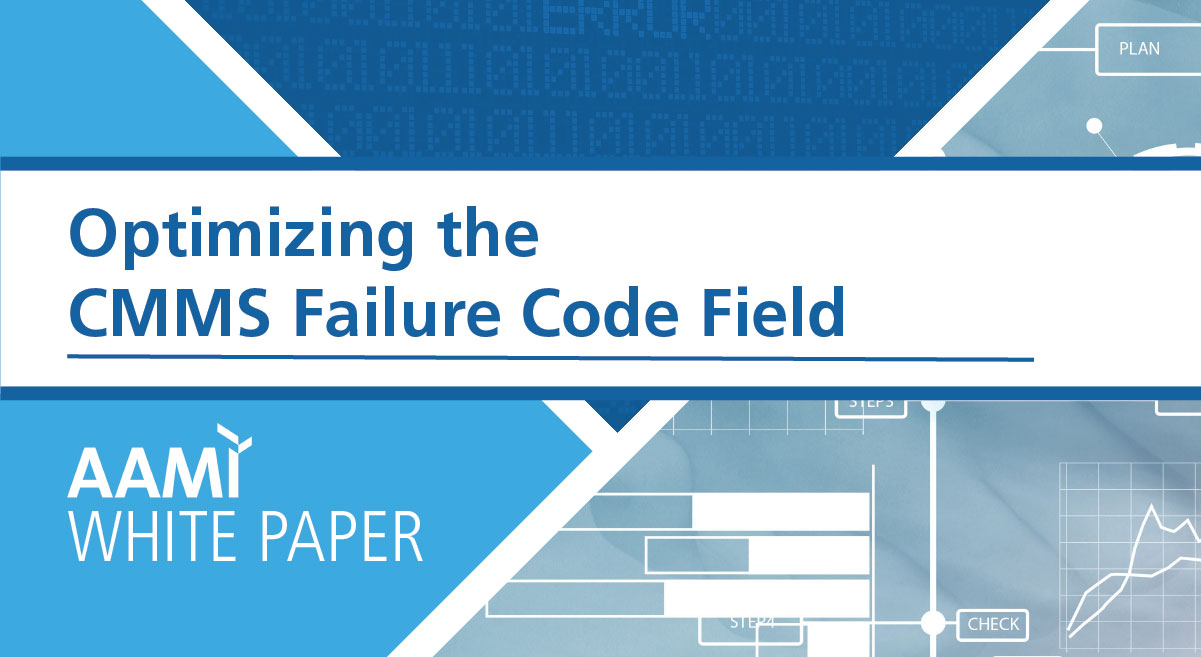 With hospitals and industry leaders all collecting data in their own unique ways, it has been all but impossible for healthcare technology management (HTM) professionals to assess their industry as a whole. That’s why six competing computerized maintenance management system (CMMS) suppliers recently set aside their differences to standardize how medical device information is configured. They outlined an agreed-upon method for optimizing and standardizing failure codes in a recent white paper.

The white paper, Optimizing the CMMS Failure Code Field, was sponsored by the Association for the Advancement of Medical Instrumentation (AAMI) and represents the insights of a CMMS Collaborative made up of experts from Accruent, EQ2, MediMizer, Nuvolo, Phoenix Data Systems, and TMA Systems.

“This is about collecting more consistent and actionable data,” said Carol Davis-Smith, vice chair of clinical engineering of the AAMI Board of Directors and principal of Carol Davis-Smith & Associates.

An HTM thought leader and consultant, Davis-Smith helped facilitate the discussions between the CMMS Collaborative and the HTM community that ultimately led to the new white paper. She explained that the CMMS Collaborative chose to focus on standardizing how HTM departments handle failure codes because of how important this code field is for establishing and assessing the performance of medical device maintenance programs.

“In the short term, if everyone treats failure codes the same way, CMMS suppliers can implement their platforms faster. This will enable healthcare technology managers to collect consistent data and begin internal benchmarking to enhance the management of their medical device inventory,” Davis-Smith said.

In the long term, healthcare technology managers will also finally be able to answer every executive’s million-dollar question: “How do we compare to others?”

Until now, being able to compare the performance of a medical device maintenance program or the reliability of a device network to others has been difficult. However, if everyone is recording and sharing their data in the same way, recognizing what is a benchmark for ideal performance and safety will be universally easier.

“It’s data that’s not only valuable for planning, but also for recalls and regulation,” added Danielle McGeary, vice president of HTM at AAMI. “Let’s say you’re seeing a ton of battery failures in a fleet of infusion pumps three months after a battery replacement. You’re going to want to see if other hospitals are running into the same problem. If everyone is documenting these failures in the same way, you have concrete, actionable data.”

Matt Baretich of Baretich Engineering, thought leader and co-facilitator of the failure code white paper, explained that this isn’t the first time the HTM community has discussed pooling maintenance data for everyone’s betterment. However, it has been difficult to get everyone to agree about how to proceed.

“What makes this effort different is that we’ve got the suppliers who build the tools that use these codes agreeing to this standardization,” he said. “Their customers are looking for a best practice for using these deeply customizable management systems, and now there is one.”

To facilitate a speedy adoption, the CMMS Collaborative members have already committed to working with their existing clients to transition from current platform configurations to ones that leverage this standardized list of failure codes. After evaluating the success of this first effort, CMMS and HTM leadership may consider standardizing additional code fields.

“There is no interest on anybody’s part to standardize everything or make the CMMS software identical,” Baretich added. “Instead, this shared effort is focused on code fields that, if standardized, can lead to clear applications of data, and ultimately, better ways to ensure patient safety.”

Davis-Smith and Baretich presented on this topic at a HTM Mixer hosted by MD Publishing (parent company of TechNation). Watch the two-part presentation online at 1technation.com/using-standardized-cmms-data-to-make-smarter-htm-decisions-parts-i-ii.