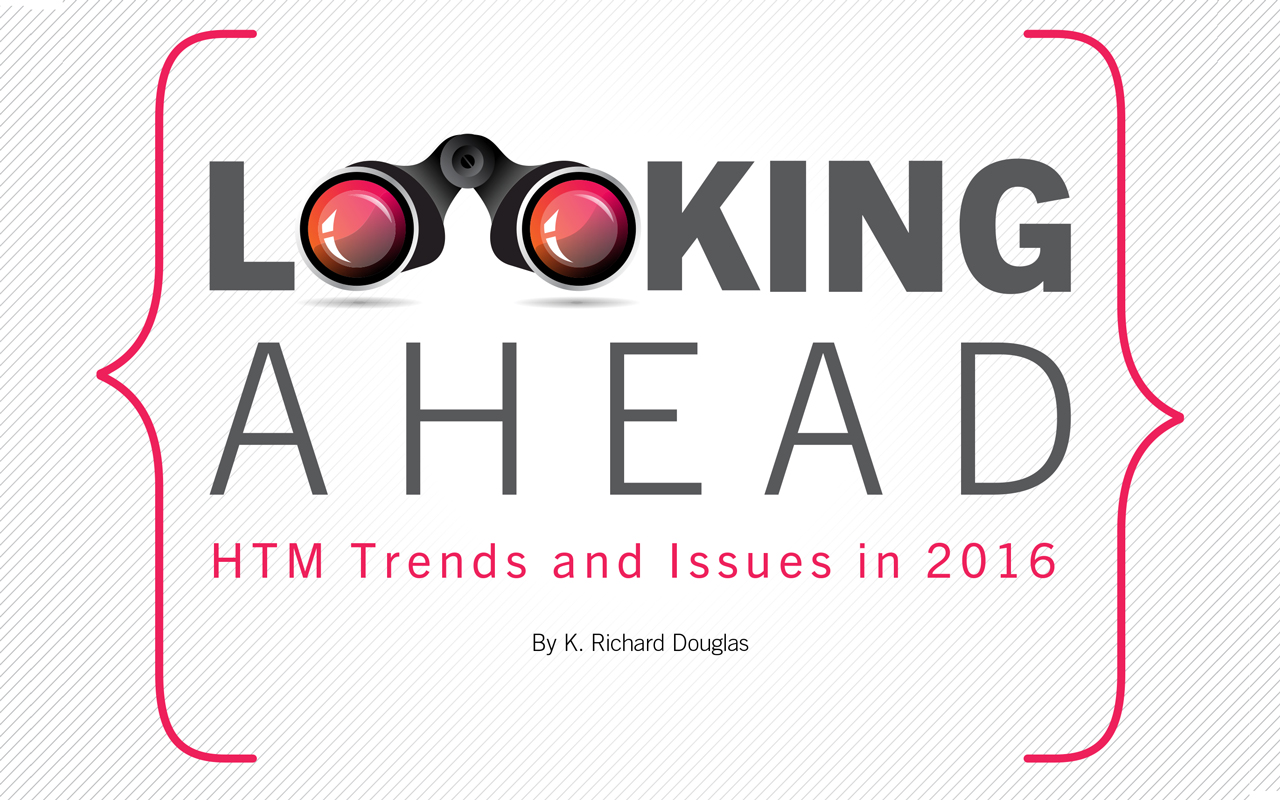 Cover Story: Looking Ahead – HTM Trends and Issues in 2016

In a field where a multi-meter, screwdriver or needle nose pliers may be common tools of the trade, the focus of issues and sweeping changes rarely have anything to do with tools or how they are used. The issues are rarely related to technology. The focus is often centered on soft skills or staffing, new regulations or budgetary concerns.

The accumulation of knowledge and experience often dictate how things are done in HTM. As with evidence-based medicine, when certain procedures and diagnostic modalities work best for treating an illness, then you can be reasonably sure that this is an approach worth trusting.

Within the HTM profession, this approach has proven true with best practices, supplemented training and education used as guiding lights and the impetus for changing or modifying the way things are done.

More so than in the past, there is much more emphasis on sophisticated technologies. It’s HTM 2.0; the basis for nearly every change, every new class, every certification update and every workshop. It’s HIPAA requirements, interoperability, sterilization considerations, security of patient information and alarm fatigue.

Innovation in thought processes and procedures, inventing a better mousetrap and adapting to new regulations and protocols all have a place in advanceing the profession. Keeping up with the education that is required in a high-tech field is part of the evolution that will be necessitated by change.

New CMS rules have impacted hospital budgets and altered the HTM landscape. This, no doubt, affected many expenditures that were commonplace five years before. Belt-tightening has become a fact of life and HTM departments have found ways to contribute.

Robert Preston, CBET, A+, director/account manager II of clinical engineering with Catholic Healthcare Initiatives in Lakewood, Colorado, agrees with Gieras about the focus on power strips during this year and adds alarm fatigue and Adjustable Equipment Maintenance (AEM) to the list of hot topics.

Gieras says Clinical alarms and the TJC 2016 deliverables will continue “with [a] more significant focus,” she says. Health systems are more dedicated than ever on establishing and developing performance standards and The Joint Commission requirements are a great guide to establish a baseline.

Continued medical device integration as hospitals expand their scopes and EMR deployments are on Gieras’ list as well.

The issue of PM frequency, which CMS ignited in 2011 and then subsequently eased slightly a couple of years later, was addressed with a new publication in early 2015. “ANSI/AAMI EQ89:2015, Guidance for the Use of Medical Equipment Maintenance Strategies and Procedures” takes steps to help standardize many maintenance procedures.

The Year that Was

This year saw some HTM issues that were holdovers from 2014 along with developments that provided new resources to the profession. 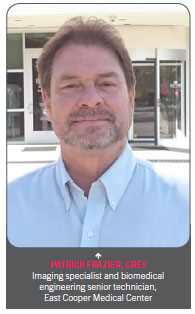 AAMI made a substantial contribution to the usable knowledge of HTM professionals in 2015 according to Salim Kai, MSPSL, CBET, clinical safety specialist in the Office of Clinical Safety at the University of Michigan Health System.

“Patient safety and cybersecurity were significantly highlighted this year by AAMI and will continue to be a hot topic during 2016. FDA safety guidance with infusion pumps is one example,” he adds.

Also, Kai says that Matt Baretich’s electrical safety manual was a much awaited update, and is a good reference publication.

The electric safety manual is the first update in six years and is an important resource for biomeds. Electrical safety also brought focus to an issue that spilled over from the previous year. In September of 2014, the Centers for Medicare and Medicaid Services (CMS) announced that they would allow power strips (RPTs) in patient care areas. Increased use of medical technology, and the accompanying need for a convenient power source, made earlier National Fire Protection Association provisions counterproductive.

The changes came with several requirements, including ampacity limits. The power strips must be used to power patient care devices – not personal electronics. Periodic assessments of the assemblies should be made and the strips should not be used outside of patient care areas. The memorandum from CMS had contradicted some earlier information. ASHE has since issued resources that address this issue. For additional details, visit.

Interestingly enough, one of the most important issues of the past year, and certainly one that will haunt managers during 2016, is not related to interoperability or electrical specs. It is associated more with HR than a particular technology. The issue is one of staffing. Despite Time magazine’s conclusion that the HTM profession is one of the best jobs you have never heard of, the ability to fill vacated positions or expanding departments is a challenge. 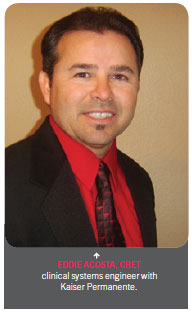 “As a working manager, and one which has had to search for new and replacement employees, one of the top issues I find for 2016 is the shear lack of people getting into the HTM field,” says Patrick Frazier, CRES, imaging specialist and biomedical engineering senior technician at East Cooper Medical Center in Mount Pleasant, South Carolina.

“As several national magazines have reported in the last year, HTM a.k.a. Biomedical Equipment Repair Technician, is one of the top 10 jobs you didn’t know about. Another magazine quoted that by the year 2020, there will be a 30 percent shortage of qualified technicians,” Frazier says.

“This problem has many ramifications; one being the cost of vendor and third-party service. In the last couple of years, we have seen vendor costs skyrocket,” Frazier adds. “Imaging hourly rates are right at $600/hour, anesthesia and monitoring are approaching $400/hour and even local third-party biomed guys (are) getting $200/hour for general biomed service such as PMs and minor repairs.”

Frazier says that these costs create a desire for many hospitals to achieve a full staffing of their biomed departments, which in many areas, he says, just isn’t happening.

“The hardest position to fill in my opinion, as well as some of my local colleagues, is a Biomed II position. Someone with the experience to get the job done without constant supervision but who doesn’t cost the facility a arm and leg to hire. In some hospitals I know of, they have had open Biomed II positions for more than a year,” Frazier says.

“Demand sets the salary higher for the new folks getting in the field while the pressures of vendor service costs keep the salaries in check if not flattened for the experienced folks. In short, the pay scale between just starting and highly qualified is shrinking. Not always a good thing,” he says.

“Got to agree that staffing is the top issue for this year and the foreseeable future,” says John Pollard, Northern California regional manager of clinical engineering for St. Joseph Health/Tech Knowledge Associates.

“Recruiting and hiring has always been a stressful time, but in today’s environment, it is complicated by lack of qualified or interested candidates, lifestyle along with quality of life issues and budgetary restraints,” Pollard says.

“Faced with a small talent pool here in Northern California, we’ve created our own apprentice programs where we hire folks that have a mechanical curiosity and fit in with the crew, and train them into biomeds. Takes a couple years, along with training expense, but it has been successful for us,” Pollard adds.

Frazier also says that training costs have joined repair costs in a trend that has been escalating over this past year.

“Training classes that average $3,000-$6,000 a week for tuition are getting harder and harder to justify,” he says.

“A lot of hospitals have lumped their training dollars into a single fund which means for us, we have to compete with nursing staff and educators for training dollars,” he adds. “Used to be easy to justify a school. Take the cost of proposed contract over a three-year period, subtract the cost of training and add a percentage of what parts would cost, somewhere between 10-30 percent of the contract proposal and bam, the return on investment was obvious to the A Team. But, with tuition cost climbing, the ROI is shrinking and we are finding that the nursing staff gets most of the training funds.”

“One of the ongoing top issues in the biomed community is reducing medical equipment costs. Biomed departments are being stressed to provide advanced technology systems and also provide reduced cost medical equipment maintenance,” says Eddie Acosta, CBET, clinical systems engineer with Kaiser Permanente. “This is practically an oxymoron, advance technology has a higher cost of support, and older equipment doesn’t get cheaper to maintain.”

“Biomed departments have to become true partners of health care systems and instead of being an expenditure to the systems. A culture where they are seen as an equal partner with cost-saving initiatives to provide opportunities for success,” Acosta adds.

Twenty-sixteen could be a year when many biomeds take a pass on obtaining a professional credential, according to Frazier. He points out that there are reasons they might want to reconsider.

“Another issue I see for 2016 and beyond is the amount of folks that are not getting AAMI certified. I don’t have the numbers to back it up, but it seems to me that many entry- and mid-level folks just don’t find AAMI certification important; I find this unfortunate,” Frazier says.

“I don’t know many professions that have the responsibility of patient care we have and do not have to have some kind of certification,” he explains. “I know this conversation ruffles some feathers, but it’s a conversation that needs to progress as we merge with IT departments.”

Frazier points to the IT world as an example of a profession where certifications are important to career growth. He believes that it instills a higher level of professionalism when biomeds are confronted by people who “don’t know of us, our work habits and our achievements.”

“By no means am I saying that you have to be certified to be professional or have high work standards,” he says. “I know of many wonderful technicians out there who are not certified. What I’m saying is if three technicians were looking for a job and one was certified, I’m going to be inclined to take a little closer look at that individual simply because I think he/she took a little more time to study, take a test and put some letters behind his name,” Frazier says.

“Would I hire him specifically based on his certifications? No,” he adds.

Kai says that 2016 will also be a year where we see “more IT and biomed convergence and partnerships” occurring. And related to this, he also expects “IEC800001 application of risk management for IT networks to become a more referenced standard.”

Patient deaths will stop an industry focused on patient safety in its tracks. That began the summit convened to assess the problem presented by clinical alarms in 2011. Since then, the HTM industry along with health care systems and hospitals across the country have assessed and addressed The Joint Commission patient safety goal regarding clinical alarms that plagues nurses and endangers patients.

“The deadline is summer 2016 for the second phase of the goal and hospitals should expect Joint Commission inspectors to ask questions about what important alarms were identified, about policy and plan of action, staff education on alarms management, etcetera,” Kai says.

As an old Chinese proverb says; “When the winds of change blow, some people build walls and others build windmills.”

HTM will no doubt find a way to once again harness the wind in 2016.