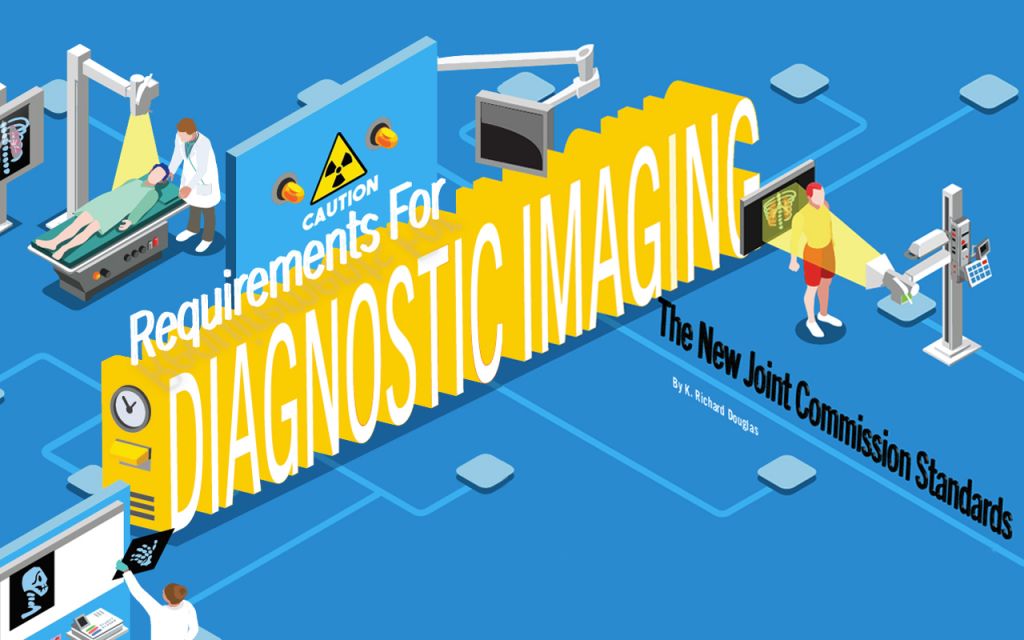 The rapid escalation in the use of CT scans and nuclear medicine for diagnostic purposes has exploded in recent years. In 1980, there were 3 million CT scans performed in the U.S. By 2006, that number had increased 20-fold. With the steep escalation in the use of CT scans, the public has become more educated and concerned about the possible ill effects of increased radiation exposure. A 2010 President’s Cancer Panel report suggested that clinicians keep a tally of the amount of radiation that patients are exposed to as a result of these imaging studies. 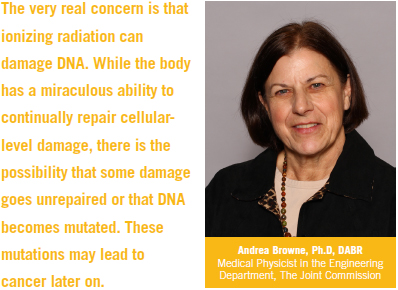 In 2010, the Centers for Medicare and Medicaid Services (CMS) named The Joint Commission a designated accreditor of advanced diagnostic imaging centers. With TJC’s focus on patient safety, the topic of modern-day diagnostic imaging was due to be revisited.

The new standards have evolved through the recommendations of accredited organizations, professional associations and imaging experts. The new standards include areas that require evaluation to ascertain that diagnostic imaging is conducted safely.

The Joint Commission listened to the feedback and developed the new standards. Feedback came from professional organizations, such as AAPM, ACR, ASRT and many others.

The new requirements cover MRI safety; the inspection, testing and maintenance of imaging equipment; CT radiation dose documentation; and training for the diagnostic CT technologist on radiation dose optimization, pediatric imaging and the safe operation of the CT unit used.

Imaging has even more regulation than other areas within HTM, with the scrutiny of the American College of Radiology, CMS and the FDA.

As mentioned previously, radiation is a concern with the public and just one element addressed in the new requirements. With CT scanning, it is part of an important balance to get right.

“You may not just want to talk about reducing radiation exposure for a study, because you can reduce it too much, and then it doesn’t have the diagnostic quality that you need,” says Andrea Browne, Ph.D, DABR, who is a medical physicist in the engineering department at The Joint Commission.

“The phrase that is used is ‘radiation dose optimization.’ That means that you are using the minimal dose for a given condition with a given piece of equipment to produce a diagnostic result,” she says. “There’s a lot of work being done on how you design and implement CT imaging protocols that, in fact, optimize the dose and give you optimal images for diagnoses.”

There are three areas of risk, as The Joint Commission sees it, in developing an updated standard and they are: making sure imaging equipment is functioning properly, which would include conducting annual imaging equipment performance evaluations; qualified staff supporting imaging services and conducting imaging exams, this includes using a qualified medical physicist; and making sure that staff is trained on optimizing CT radiation dose with processes in place to support safe imaging and managing safety risks in the MRI suite.

“There have always been standards that pertain to safety of the environment, safety of the equipment, but not as it addressed medical imaging in this degree of specificity,” she says.

Browne points to one area of confusion that elicited a question directed at The Joint Commission engineering department as a result of the new standards.

“What do you set up, because if you have an organization that is multi-accredited, as their imaging department might be, in CT or MRI, you might be accredited by both the American College of Radiology and The Joint Commission. We’re saying, put a quality control program together and follow it. Then, the organization is saying ‘We’re going to do that, but who do we follow?’ ”

“If the manufacturer gives you a set of instructions for preventative maintenance, that may have some testing involved, and the ACR has others — and they are very specific on what tests you do — what kind of parameters you track, [and] how you set the actionable limits. What do you do if they are not congruent with each other,” Browne asks.

She says that the answer was that the organization really has to look at what the manufacturer is saying.

“Are they directing their instructions towards preventative maintenance, which is one set that the biomeds are going to be very involved in, versus daily quality control testing, or weekly or quarterly, which is prescribed by an accrediting agency,” she says. “That is one thing that I think organizations might want to look into. That is, when they get inspected, by an accrediting organization, that they’re following the appropriate plan and you know what the manufacturer’s instructions cover and how in-depth they are.”

“Are they just talking about acceptance testing and then annual or semi-annual preventative maintenance versus this daily, weekly, monthly testing that the operator of the piece of equipment does. That’s two groups that have to talk to each other; the biomeds and the quality control tech or the imaging tech, who is actually doing the testing,” she says.

The American College of Radiology (ACR), along with their professional partners, offers guidance to help negotiate the new standards.

“ACR has the dose index registry that helps with meeting that requirement in terms of analyzing the data and confirm them against external benchmarks,” says Priscilla (Penny) Butler, M.S., FACR, FAAPM, senior director and medical physicist, quality and safety, American College of Radiology (ACR). 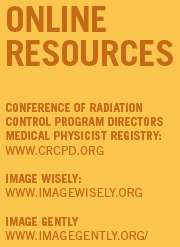 Browne points out that this would include the biomed. This is in light of the fact that many biomeds are handling the PMs of MRIs that might have been maintained by the vendor in the past.

“It’s important that all of those biomeds are appropriately screened and know the hazards that are involved in working around a strong magnetic field. And, what equipment you can take in there and what you cannot,” Browne explains.

“They should be part of the group that is screened and educated every year,” she says. “In terms of being knowledgeable about the hazards in the MRI suite, and knowing that nothing physically about the individual has changed that would affect their ability to enter the suite (any device or implant since last screening). They need to update their clearance to get into the suite.”

Not to be Confused

While hospitals will certainly want to comply with any TJC imaging directive, there is a separate directive that hits the bottom line in terms of Medicare reimbursements. The National Electrical Manufacturers Association (NEMA) XR-29 Standard, which became effective January 1, 2016, specifies four attributes of CT scanners that relate to optimization of dose of ionizing radiation while producing a quality diagnostic image.

If all four attributes are not in compliance, there will be a five percent reduction in reimbursement per scan. That figure increases to 15 percent on January 1, 2017. The penalty only applies in certain situations. For instance, it does not apply to interventional radiology procedures.

The National Electrical Manufacturers Association (NEMA) XR-29 (MITA Smart Dose) Standard applies to CT equipment and to dose optimization and management. The XR-29 standard prescribes a balance between the dose of ionizing radiation and the image quality needed to deliver what is required by the physician.

“Unfortunately, there is a lot of confusion regarding XR-29 and what solutions can be implemented to avoid the cuts. For many, there is not a good solution. Many manufacturers have made upgrading a very cost-prohibitive endeavor (it’s almost cheaper to buy a refurbished replacement scanner in some cases),” says David Harns, CT product specialist at Block Imaging.

“Some folks are investigating third-party solutions to become compliant but – as has been the case since January – we have not been given complete clarity from MITA and/or NEMA that these are (or will be) acceptable solutions,” Harns says. “We’re doing our best to advocate for organizations that have found themselves in a situation that was not of their own making. It has not been the smoothest implementation of new imaging equipment standards, that can be said for sure.”

Butler says that they have not heard from anyone who is necessarily having problems with the standards, but instead, just questions relating to the new standards. The ACR has developed some questions and answers to make navigating the new standards easier.

A key component of the new requirements is the availability of a medical physicist. The medical physicist may be assisted with the testing and evaluation by an individual who has “the required training and skills, as determined by the physicist.”

The Conference of Radiation Control Program Directors Inc. (CRCPD) has established a Medical Physicist Registry which offers a registry of board certified medical physicists.

“The biomed might be the individual running the phantoms or collecting data for the physicist to look at, compile and make recommendations based on those results,” Browne says. “It’s entirely possible that you’ll see more biomed/physicists working together to do the performance evaluations that The Joint Commission standards require.”

“There really has to be a very symbiotic relationship between the biomedical engineer, who supports medical imaging equipment, and the medical physicist, who’s making measurements and knows what you can get out of that piece of equipment,” Browne says.

Browne says that some of these standards – CMS, TJC and ACR – have emphasized the importance of the diagnostic medical physicist.

“With the appreciation for the complexity of the equipment, the regulations that are out there that require the input of the expertise of the physicist, there’s a big need, a demand in the field,” she says.

The Image Wisely campaign comes from the American College of Radiology and the Radiological Society of North America. Recognizing the increased exposure to radiation by adults from medical imaging, they collaborated with the American Association of Physicists in Medicine and the American Society of Radiologic Technologists in developing the campaign. The campaign makes available resources for imaging practitioners and patients.

The mission of the Image Gently Alliance for Radiation Safety in Pediatric Imaging aims “through advocacy, to improve safe and effective imaging care of children worldwide,” according to its website. The campaign offers free information for parents and imaging practitioners.

Diagnostic imaging will continue to evolve and require changes and innovations that may impact HTM professionals more directly. Fluoroscopy, network security and getting an imaging history into a patient’s EHR are ongoing issues that HTM professionals will be exposed to or be directly involved with.

Browne says that the next big area to get more scrutiny will be fluoroscopy. She says that since 2006, all fluoroscopic units must have a measure of radiation output that is displayed. There are four different ways that manufacturers actually make this measurement and display the information.

“You have to calibrate these devices that measure the radiation from fluoroscopy [and that] is the biomeds bailiwick. They really have an important role,” she says.

She points out that the physicist might make measurements, and determine that the device is meeting state guidelines for maximum output, as an example, but they must turn to the biomed and ask the biomed to adjust the device to make sure that the measurements are correct and the image quality is maximized.

With some procedures, such as RF cardiac catheter ablation, the patient may be exposed to more radiation from fluoroscopic exposure than other common radiological procedures. As these procedures continue to increase in frequency, along with diagnostic imaging from CT and MRI, the focus on protecting the patient will result in new standards.

The role of the HTM professional will continue to evolve as it relates to TJC updated diagnostic imaging standards and future standards may be grounds for additional training and more involvement.