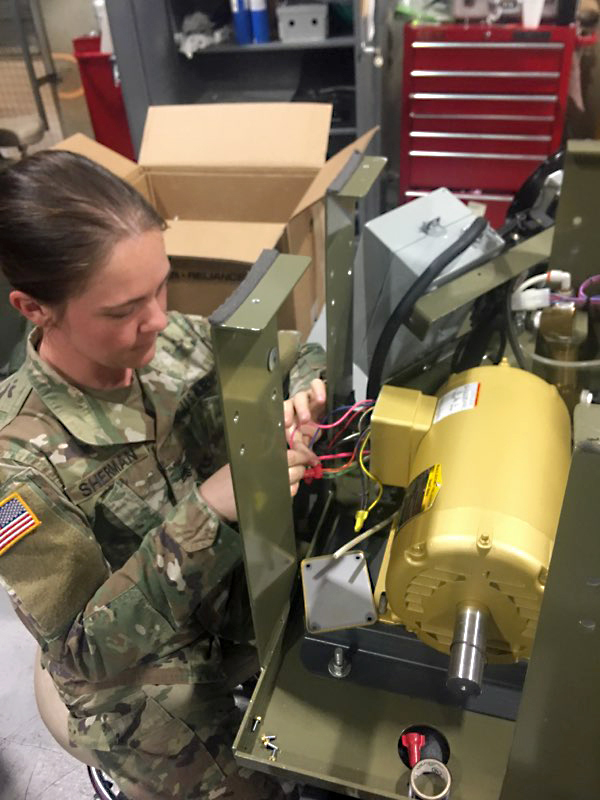 The soldiers deployed to the Medical Maintenance Operations Divisions (MMODs) run by the U.S. Army Medical Materiel Agency, a direct reporting unit of AMLC, to boost workforces and move lifesaving devices, such as ventilators, quickly through the system.

In teams of three, the soldiers worked alongside military, civilian and contractor technicians at USAMMA’s MMODs at Tobyhanna Army Depot in Pennsylvania, Hill Air Force Base in Utah and the Defense Distribution Center in Tracy, California. 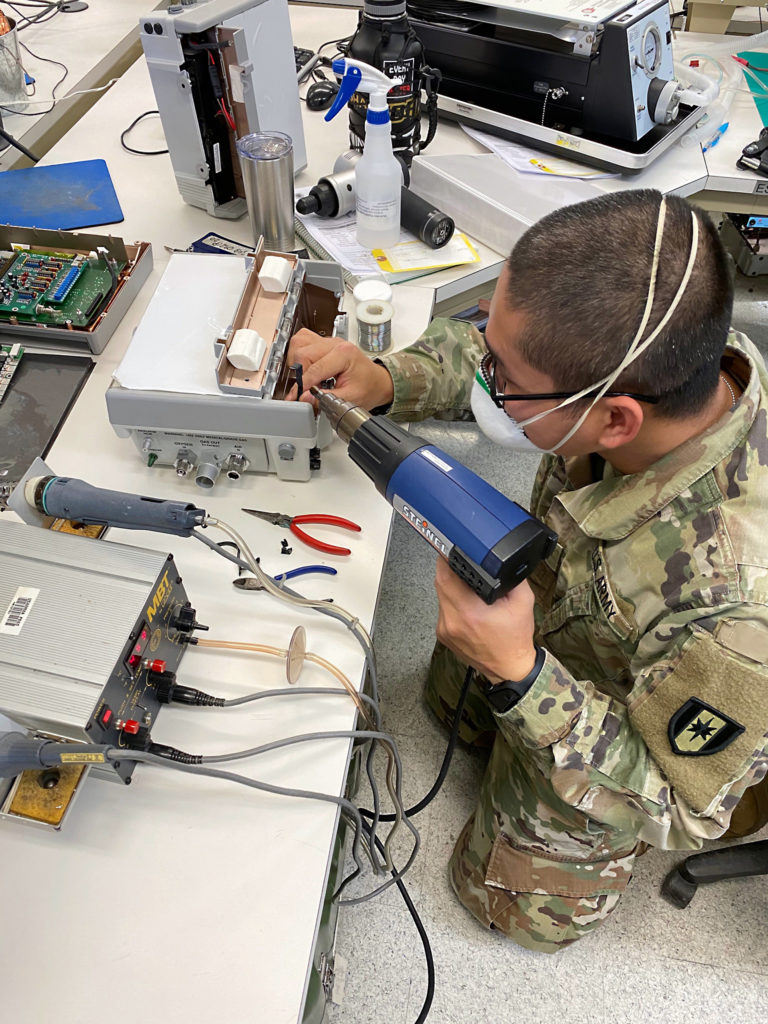 Through early June, the soldiers worked on devices such as ventilators, patient vital sign monitors, defibrillators and oxygen generators, in support of the whole-of-government response to COVID-19.

“Each of us was paired up with a subject-matter expert to allow for one-on-one training and answering questions,” said Sgt. Katherine Sherman, team leader at MMOD-Hill. “We were able to learn an incredible amount in our two months on site.”

Sgt. Jacob Ferguson, who led the team at MMOD-Tracy, called the experience “phenomenal.” He said he was grateful for the opportunity, which builds on a previous visit to MMOD-Tobyhanna a few years ago when he worked with lab equipment technicians.

“This helped us further understand the capabilities across each MMOD,” Ferguson said. “… The instructors were very knowledgeable. While intimidated at first, my team and I feel confident performing depot-level services.”

Ferguson, Sgt. Trevor Nelms and Pfc. Dangelo Brown racked up over 1,500 hours at MMOD-Tracy, working 10 to 12 hours per day, six days a week. The trio was integral to the depot team completing over 200 maintenance operations for various medical devices.

The MMOD-Tobyhanna team – comprised of team leader Staff Sgt. Derek Presto, Spc. Nguyenquanghu Phan and Pfc. Kurtis Geer – clocked another 1,200 hours as they supported over 200 more work orders. The team provided direct ventilator service support to an Army hospital set up at the Javits Center in New York, along with 22 other states in support of the COVID-19 response.

At MMOD-Hill, Sherman teamed with Sgt. Casey Sims and Spc. Charles Roberts to work over 1,000 hours of labor on different medical devices, helping to complete over 2,200 work orders and keep pace with mission requirements.

Jose Vasquez, division chief at MMOD-Hill, said the soldiers were able to quickly blend into the depot team, exhibiting a strong work ethic and attitude that helped not only tackle high work order requirements but turn them around in very short order.

Vasquez highlighted the team’s efforts in supporting quick turn-arounds on ventilators and oxygen generation machines, the latter being a specialty to MMOD-Hill.

“There were several other urgent requests which required the strategic movement of technicians throughout the shop to ensure all requirements were completed efficiently and within the required deadlines,” he said.

“Medical logistics is a team sport,” said Col. Ross Davidson, 6th MLMC commander. “The 6th MLMC is here to support the medical logistics enterprise in order to best serve the Army, the DOD and the Nation.”

“It is important that we recognize the hard work of these soldiers who executed thousands of hours of combined labor in order to repair medical devices and support the operating force,” said AMLC Commander Col. Michael Lalor. “The relationship between the AMLC, USAMMA and 6th MLMC has never been stronger, and this is just one example of how we are coming together to combine our capabilities and accomplish the mission.”