Posted By: TechNation Development Teamon: June 01, 2022In: Department of the Month, Magazine, Spotlight 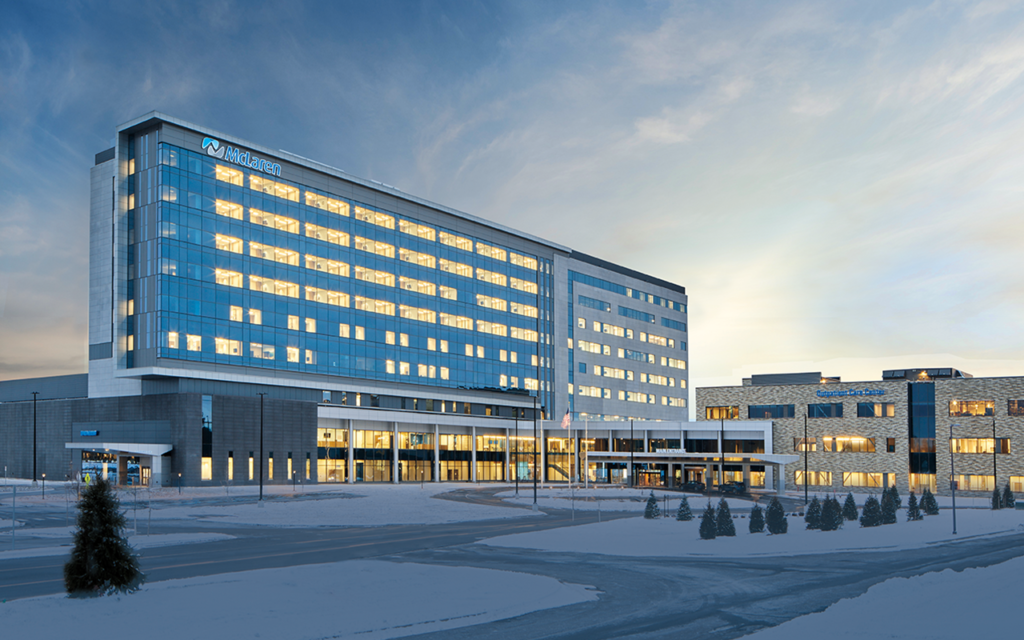 During the mid-1960s, license plates in Michigan bore the slogan: “Water-Winter Wonderland.” The plates were available through 1967. In 2021, the Michigan Secretary of State revived the historic plate. Most license plates today have the “Pure Michigan” slogan.

The old slogan may be the most appropriate one for many people, reflecting Michigan’s four seasons and the outdoor attractions that bring many to the state, along with favorite activities of residents who enjoy skiing or the Great Lakes.

While the outdoor activities can be an enjoyable part of the state, there are times when residents need health care. McLaren Health Care, which is headquartered in Grand Blanc, Michigan, is a $6 billion health care system serving the needs of Michigan and Ohio residents.

One of the systems 14 hospitals is located in Michigan’s capital city of Lansing. McLaren Greater Lansing is a tertiary teaching facility located on the edge of the Michigan State University campus. The hospital’s clinical engineering (CE) team manages the facility’s medical equipment.

The facility recently opened thanks to an enormous effort from the CE team.

“Greater Lansing originally had two campuses/hospitals—Penn and Greenlawn—which are part of the larger McLaren Health Care system. This project was to build a single replacement hospital for both sites next to the campus of (and in conjunction with) Michigan State University,” says Samantha Jacques, Ph.D., FACHE, AAMIF, vice president of McLaren Clinical Engineering Services (MCES).

Rick McCloy, who recently retired, served as the project lead and is a former CE manager.

Gary Woods and Nate Thayer, members of the corporate team, were brought in to help with medical device integration and cybersecurity along with clinical engineer Pam Shuck.

Most work on the system’s medical equipment is handled in-house by CE team members.

“We have a centralized contract management team at corporate that handles renewals and negotiations. We have very few contracts on equipment as most repairs are handled in house,” Jacques explains.

Data collection is handled through a centralized CMMS system that serves the entire system.

“For this project, we also had to employ an equipment planning software to track and manage all the net new purchases as well as track what was moving from which campus to the new campus,” Jacques says.

The hospital-consolidation project tested the skills of the entire biomed team. Leadership for the project was imperative for getting the medical equipment portion accomplished.

“This project started in December of 2017 when the announcement was made that McLaren was going to consolidate its two Lansing hospitals into a new $600 million campus adjacent to Michigan State University. We broke ground in 2018. The replacement hospital is a 39-acre, 240-bed, state-of-the-art hospital, Karmanos Cancer Center and an ambulatory care center,” Jacques says.

She says that with over 750,000 square feet, the new hospital’s spaces were designed with patients and clinical workflow in mind.

The CE team pulled off an inspiring feat through hard work and confident leadership.

“Building a new hospital, during a pandemic, while still maintaining the current two hospitals was more than challenging. The team on site spent endless hours working between multiple sites, ensuring operations continued flawlessly, while unpacking, installing and deploying a bevy of new technology at a new site. Coordination of vendor installs, integration of technology with IT platforms, and testing of technology newly implemented also had to be coordinated,” Jacques says.

The efforts of the entire team remained focused under the direction of the manager.

“Rick McCloy, who started his 45-year career as a BMET assistant at the site, rose up through the ranks to lead the department as it’s manager when this project was first conceived. In late 2020, he transferred full time over to the project to manage and coordinate all the CE work for the project,” Jacques says.

She says that McCloy retired on April 1, 2022, having led all the equipment management for one of the most complex projects in McLaren history. His endless hours and remarkable dedication to getting the details right have made all the difference in the project, she says.

“Patient move day was probably the most challenging as two teams had to be deployed to different locations to uninstall equipment that was moving, as the patients were moving. As the patients were transported to the new hospital, teams had to remove the equipment from the departments, transport them to the new hospital and re-install them,” Jacques says.

She says that the amount of coordination to ensure same day moves happened, with no impact to patient care, was astonishing. The team worked long hours and did what it took to make the opening incredibly successful. Jacques says that it was a wonderful team effort.

“This department does have two AAMI BMET apprentices in the program developed by AAMI (Mitchell and Spencer). This was an awesome opportunity for both of them to learn about technology and gain valuable experience on their way to CBET certification,” Jacques says.

Michigan’s capital city is served by an impressive new medical facility completed during the COVID-19 pandemic. A competent team of HTM professionals, led by a knowledgeable and experienced manager, were able to successfully complete the mega-project, with flawless medical device installation and integration.