Department of the Month: The Lyndon B. Johnson Hospital Biomedical Engineering Department 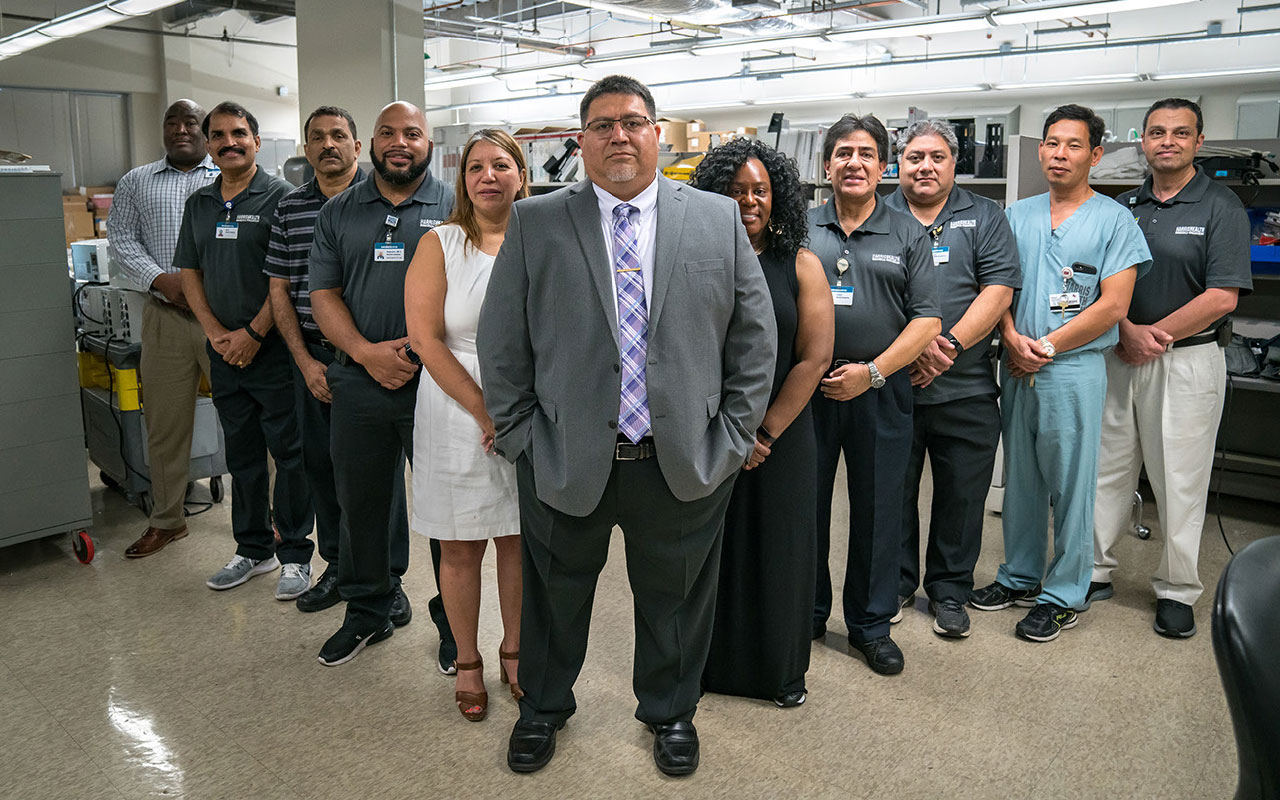 Luis Marroquin and his biomed team at LBJ Hospital.

Lyndon B. Johnson was the thirty-sixth president of the United States of America. He was vice president under John F. Kennedy and stepped into the senior position when Kennedy was assassinated. Johnson was a tall Texan whose prime vision was a program to build what he called “a great society.”

President Johnson’s legacy lives on in Houston, Texas where the Lyndon B. Johnson Hospital is staffed by the physician faculty and residents of the University of Texas Health Science Center at Houston. The hospital is a 215-bed acute care facility that specializes in neonatal intensive care and is a part of the Harris Health System.

Biomed duties are handled by a 13-member team; a director and staff comprised of biomedical engineering and biomedical electronics technicians of varying skill levels and one administrative support member to assist in coordinating the many competing priorities.

Service contracts are managed through partnerships with several third-party organizations.

“Biomed works with partners; we don’t call them contractors. We have partnerships with GE, Crothall, Philips, Steris, Olympus, Siemens and Canon. We assist in the coordination of the PMs and repairs to minimize downtime and updates to users and administration,” says Luis Marroquin, supervisor of Biomedical Engineering.

Besides incoming inspections and preventative and corrective maintenance, the team participates in pre-purchase evaluations of new technology and equipment. The team also performs service contract analysis, negotiations and management.

In addition to the hospital, the biomed team supports outpatient clinics at the Outpatient Center (a stand-alone facility on the LBJ Hospital campus) and 10 off-site community health centers in north Houston and Harris County.

A guiding principle helps anchor the team and keep it fixed on a set of values that they can rally around.

“We have become a close-knit team and developed our own biomed mission goals we call, ‘Biomed Way,’ ” Marroquin says.

“We use the book ‘Five Dysfunctions of a Team,’ by Patrick Lencioni for team building activities. We had technicians crying and laughing, sharing stories about their past and personal life. By opening up to each other, we developed the ‘Biomed Way.’ We also made T-shirts for national biomed recognition week listing our ‘Biomed Way’ goals. Biomedical Director Jackson allowed us to be open with our problems and feelings. From it, we worked together to fix little issues and complex problems,” Marroquin says.

The team’s ability to use hand tools also took them into some unchartered territory for a biomed squad. They brought their building expertise to the task of providing healthy food for patients via a project known as the “Community Farm at LBJ Hospital.”

“Biomed and the radiology department staff built the first planting boxes for the Community Farm at LBJ Hospital. The farm is part of a population health program aimed at helping patients with chronic diseases like diabetes and who lack access to fruits and vegetables. Once fully implemented, the program will give free food to qualifying patients to improve their health,” Marroquin says.

He says that hospital administration had a vision for the farm and biomed and others are making it a reality.

“We ordered the supplies and worked with staff to create the best planting boxes with careful consideration of sun exposure and soil quality. Hundreds of staff members and volunteers have been helping with the project. Many are also eating and enjoying produce such as carrots, spinach, Swiss chard and much more from the efforts of the biomed team,” Marroquin adds.

The hospital was also impacted by Hurricane Harvey. Members of the team sprang into action to protect valuable equipment.

“During Harvey, we had four technicians at the hospital. The storm dropped more than 52 inches of rain in a five-day span over greater Houston. The team was working round-the-clock and barely slept. We had leaks all over the hospital. We walked around with construction plastic and heavy- duty tape wrapping up vital and expensive equipment like the da Vinci robotic system and surgical tables,” Marroquin says. 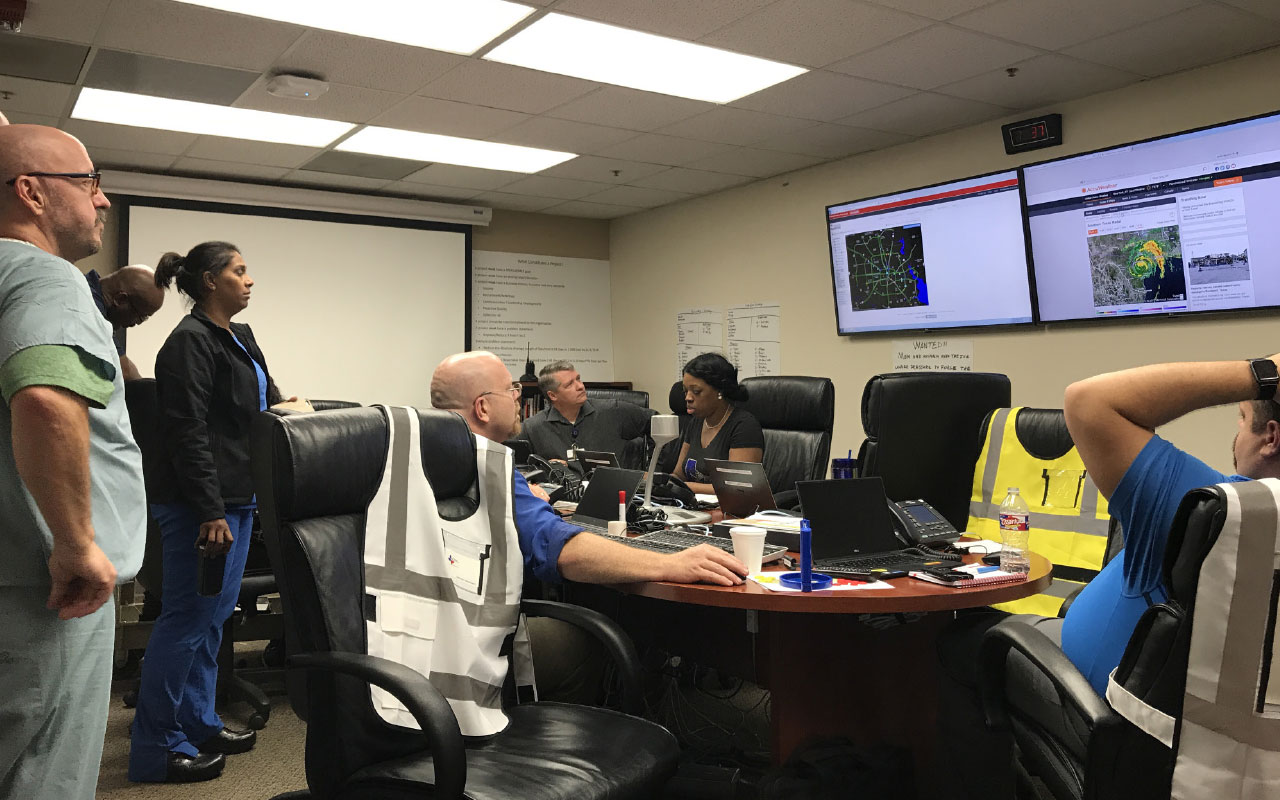 LBJ Hospital Incident Command during 2017 Hurricane Harvey. Biomed and engineering were a big part of the team.

He says that they covered up all the imaging equipment including C-arms, ultrasounds, X-ray rooms, imaging work stations, MRI units and CT scanner units.

“When we ran out of plastic, we improvised and used trash bags. Water leaks didn’t stop. We had what appeared to be mini water falls coming through some ceilings. Some exterior hallways looked like small ponds. We used huge vacuum cleaners and contained water leaks in the ceilings. During the storm, we created an impromptu helipad for a U.S. Coast Guard helicopter to land and pick up a critically injured head trauma patient. This was done through driving rain and wind. The patient was successfully airlifted and is doing well today,” Marroquin says.

They also set up accommodations for 200 area residents forced to evacuate flooded homes.

“LBJ Hospital was their only shelter from the floods. Our team set-up TVs and phone charging stations for the evacuees. We did constant rounds on the floors to check on equipment and cheer colleagues up. Our biomed guys never complained. We shared food and helped each other out during the emergency. The sleeping arrangements were not comfortable and food wasn’t the best, but we had coffee and donuts to make due. The work we did prevented extensive water damage in the imaging suites, saving the hospital an estimated $30 million in lost equipment,” Marroquin adds.

“Our belief in the ‘Biomed Way’ is what helped us during Harvey and after Harvey. The story is that LBJ biomed is a close family. And no matter what the job is, we will get it done safely,” Marroquin says.

In addition to coming to the rescue during a hurricane, the biomed team has found a way to provide customers even better coverage, while rounding out each team member’s knowledge.

“We started a second biomed shift. After two years, it has made a significant difference on our response time to addressing and fixing issues. We rotate assignments so technicians are constantly learning and growing. We do a lot of cross training. We are lucky to have a diverse professional staff that can handle anything. Our night biomed technicians can handle any issues and it’s due to the cross training they received,” Marroquin says.

He says that in addition to quicker response times, the second shift staff locates lost or misplaced equipment and performs PMs in departments that are busy during the day.

“A big plus has been the savings to the organization in overtime and on-call pay. The money saved helps the hospital and the system buy new equipment or enhance patient care,” he says.

The late president would be proud of this biomed team which has built a great society within its own ranks.