Department of the Month: The University of Cincinnati Medical Center Clinical Engineering Department 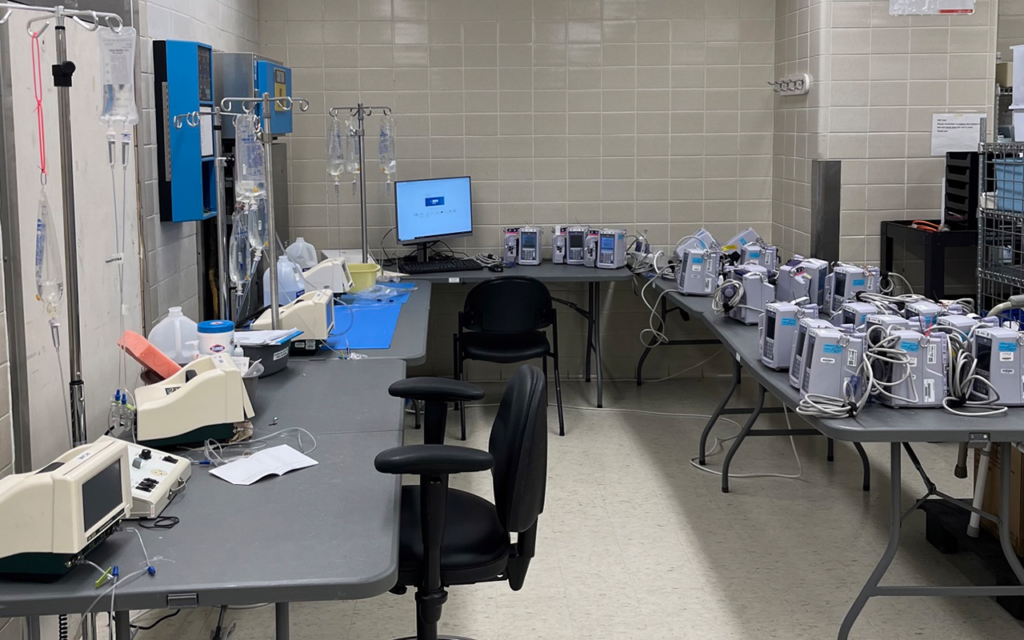 Reflected in the Ohio River are the many tall buildings that make up Cincinnati. The city sits in the southernmost part of Ohio across the river from Kentucky. The city is known for its zoo, botanical gardens and the Cincinnati Museum. The city dates back to its incorporation in 1819.

The city’s name has roots all the way back to the Roman Empire. The first governor of the Northwest Territory, General Arthur St. Clair, was a member of the Society of Cincinnati, named after the Roman statesman Lucius Quinctius Cincinnatus. He didn’t like the former name of the settlement called Losantiville, and he renamed it after the society he belonged to; Losantiville became Cincinnati.

With a population exceeding 302,000, the city depends on good health care. One of the health care sources in the city goes back to nearly the time that Cincinnati was incorporated.

The University of Cincinnati Medical Center was established in 1823 and became the country’s first teaching hospital. It currently serves patients in the city and from across the region.

Managing medical equipment at the 726-bed flagship campus and two other facilities within the system is the clinical engineering department. The department is run by Crothall Healthcare.

The team provides healthcare technology management services to 235-bed West Chester Hospital and the 241-bed Daniel Drake Center for Post-Acute Care. It also services medical equipment for other buildings on the main campus.

“We are a one-stop shop for healthcare technology management. And, although we don’t handle everything throughout the hospital, we are more than capable of providing service to the majority of the equipment as outside service contracts expire,” Tarik Zecevic, unit director of Clinical Engineering with Crothall Healthcare Technology Solutions, says.

Taking Communications Up a Notch

The team’s “tiered huddles” approach caught the attention of AAMI in a News & Media article published in June of this year. The story examined previous communication procedures between medical equipment users and the biomed department.

Crothall’s ISO 13485:2016 certified quality management system and customer satisfaction survey process positioned the team well to discover minor communication issues that left unchecked could have become a larger problem. The biomed team decided that it needed to first address communications between team members and instituted a tiered huddle system of meetings each day.

“Tiered huddles help significantly, and the process is exactly how they sound. At 7 a.m., a morning huddle starts with the tech on call with the assistant director. Shortly afterwards is the huddle with the directors system-wide, as well as the project manager and CE/IT. Between these two meetings, it sets the tone for the rest of the day on where our focus needs to be,” Zecevic says.

“We are an academic facility and we get a lot of students. Things don’t always go as planned and our industry in general is very reactive no matter how much we would like to be proactive,” Zecevic says.

Zecevic says that at 8:30 a.m., following the first two huddles, they are ready for the hospital’s huddle.

“Should there be any escalations, we are aware of anything that might have happened from the previous day or night. It’s important to share the information as much as possible should a question pop up from the hospital,” he says.

At 9:30 a.m., on Tuesday, Wednesday and Friday, there are huddles between the techs and management. These huddles cover planning, updates and percentages of KPIs.

To continue the strategy, Zecevic says that at 11:30 a.m. on Tuesdays, there’s a meeting between system-wide directors that’s driven by the resident regional manager.

“There we discuss KPIs, wins, recognitions, suggestions, projects and anything that can be shared system wide. For example, if there are any incoming inspections or projects

that will affect the whole system and/or changes throughout the system,” he says.

Because the strategy was initiated just before the start of the pandemic, it proved to be beneficial in keeping everything running more smoothly during that period.

The huddles will also prove beneficial to the rigors inherent with the addition of a new/expanded emergency department.

“With the addition of over 1,000 pieces of equipment (mainly Philips), and update of other departments that hold outdated Philips software/hardware, our focus has been on that project. Scheduling, staging and applying adequate resources will be a challenge,” Zecevic says.

With this project and others, the team also has input into equipment procurement.

“We do have other departments that we are engaged with on capital purchases. Crothall’s database provides the analytics and guidance to support capital purchase decisions based on numerous factors. UC Health just started a new fiscal year and the data shared on capital equipment purchases came from the database,” Zecevic says.

He says that factors considered when sharing the recommendations include the age of the equipment, AHA useful life, OEM support (manufactured), OEM service (parts provided), and service history.

One example where the biomed team was able to help justify an equipment purchase was for the NICU.

“We helped put the data together in front of the capital committee that clearly stated why it was necessary to replace the current equipment. The combination of factors within the database has a weighted average of 100. These indicators help us put those numbers in front of UC Health leadership, coupled with the clinical justification to help them secure a more favorable outcome during the committee meeting,” Zecevic says.

He says that the team has helped numerous departments along the same lines to justify their needs.

“This is a common practice between the business managers and department managers before they request any additional capital equipment,” he says.

The CE team currently has members who are CBETs and Zecevic says that AAMI is ever-present in discussions.

“Additionally, we have helped a local university implement their on-site visits with their students as they are developing a new clinical engineering program. They will be making our facility a scheduled visit throughout the semester while they do their rounds,” he says.

Meeting challenges and finding solutions has kept this Crothall team successfully managing the medical equipment inventory at a historic medical center. It’s all in the huddle.