Posted By: Roger Bowleson: May 04, 2016In: Expert Advice, Magazine, The Future
Print Email 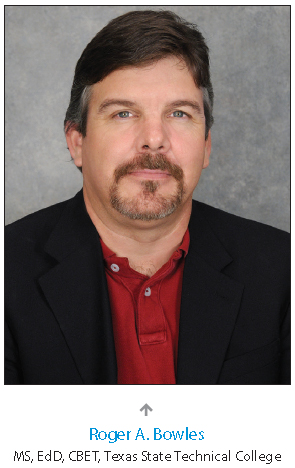 The past year has been a whirlpool of change for our program and our college. So much of a whirlpool, that sometimes I feel like the spiral is getting tighter and I’m just about ready to clear the bowl and finally come to rest in the sludge of the septic tank. OK, maybe not quite that drastic. And maybe instead of the septic tank we will emerge in a much better environment. Sometimes too many changes in an organization, in too short a period of time, can lead to chaos, total disorganization and frustration.

First, over the past couple of years (less than that really), our state has mandated by law that all associate degrees offered by state-funded colleges must be exactly 60 semester hours. That is not a minimum of 60 hours, it can’t be less and it can’t be more. The only exceptions are degrees where there is a national organizational mandate (such as nursing programs, FAA regulated programs, etc.). The law doesn’t leave much room for flexibility, especially with technical programs. And it certainly eliminates autonomy … not that people who teach for a living would know what they are doing anyway.

Second, all of Texas State Technical College’s campuses, statewide, became one system under our accrediting agency (Southern Association of Colleges and Schools). For that to occur, all programs being offered across multiple campuses had to align curricula. For many programs, this could equate to a cage match with no one leaving the ring unscathed. For our program, it was not that bad since all of the department chairs across the three campuses offering Biomedical Equipment Technology know each other and have worked together in the past. However, it did take away more of our autonomy and leave us with a decreased sense of direction.

Recently, the idea of compressed scheduling was floated by administration … and when I say “floated,” I mean “get ready for it.” Compressed scheduling is not a new idea. Research on it dates back to 2001 and some colleges have implemented it. The way it works is if a student normally takes four classes per 16-week semester, he or she would take two classes the first 8 weeks and the other two classes the last 8 weeks. This, theoretically, allows students to concentrate more on the 2 classes they are taking at one time and improves retention (i.e. prevents drop out). The students do not graduate sooner, but the compressed schedule limits distractions from taking multiple classes.

This, at face value, seems like a good idea. However, when the average technical class is examined in more detail, it becomes less feasible. The average academic (English, math, etc.) class meets for 3 lecture hours per week for 16 weeks. Most of our technical courses have a heavy lab component and meet for 2 lecture hours and 4 lab hours per week for a total of 6 hours per week over a 16-week semester. Two technical classes for 8 weeks would be 24 hours in class time per week for the student and the instructor. Some more advanced classes later in the curriculum would have students and instructors in the classroom for 36 hours per week for 8 weeks for three classes. Putting it all on paper, we realized fairly quickly that we would need two additional full-time instructors, and even then burnout would be an issue for faculty and students. It would also create a lack of lab space to run concurrent sections of classes.

Another push is competency-based education with another push toward hybrid classes that combine online content with face-to-face labs. Competency-based education is a subject I’m very familiar with having experienced it in the U.S. Navy Submarine Qualification System. I’ve also used it to teach basic rider education courses in the motorcycle world. To some extent, we use it in our courses at TSTC but there are also some elements of abstract thought being emphasized in troubleshooting courses and in analyzing problems.

So, with all of the changes occurring, there is a need to hire “Cultural Officers” to make sure we are all “happy, happy, happy” and focused on the vision(s) being passed down. And after all, “Culture eats strategy for breakfast,” or at least that is what Mark Fields attributes Peter Drucker as saying.

I don’t want to sound negative. I think change and innovation are imperative in order for an organization to thrive. However, where that change and innovation come from, I believe, plays a critical role in how successful it is in the long run. I believe listening to people in the trenches is important. Sometimes positive improvements can be gained by providing some autonomy in how people do their jobs, paying attention to their recommendations, giving them the tools needed to do their jobs, and getting out of the way. To put it bluntly, if all I can see is your butt, I can’t see your vision. And no “Cultural Officer” can make me appreciate my current view.