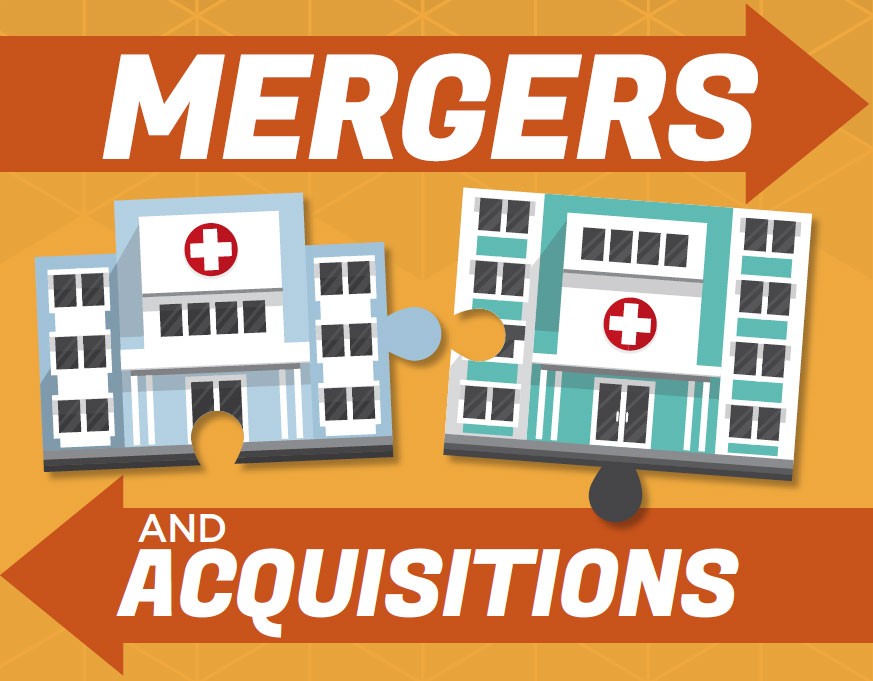 Every business in the U.S. has its own corporate culture and business model. Like people; no two are exactly the same. When companies determine that there is an economic benefit to merge, the cultures need to come together in a synergy, which can be challenging.

In health care, the need to form alliances and merge existing systems and hospitals has been borne out of economic necessity. It is sometimes necessary to “scale up.”

Supply chain costs are second only to labor, accounting for 90 percent of a hospital’s expenses.

“The total number of health care mergers and acquisitions hit a record high in 2018,” according to Becker’s Hospital Review. The trend remained strong in 2019 with a substantial number of agreements realized.

According to a Price Waterhouse Coopers Health Research Institute report, there were 1,221 deals announced in 2019, which represented a slight decrease from 1,239 deals in 2018. The total value of the deals completed in 2019 was $91.2 billion.

Deals among physician medical groups were down substantially during the same period. One mega-deal in 2018 in this sector caused the decline in the subsequent period.

Even 2017 saw some major mergers announced. In December of that year, Advocate Health Care and Aurora Health Care announced a merger that would result in a $10.7 billion system spanning several states. The merger did not involve any market “overlap,” which eased concerns of regulators.

Just after this deal was announced, another mega-merger was revealed; the merger of Catholic Health Initiatives (CHI) and Dignity Health. Again, this merger did not involve any overlap, so it was more palatable to regulators. The merger also embraced the co-CEO model.

In early 2019, the newly aligned organization became CommonSpirit Health. The new health system spans 21 states with more than 700 care centers and 142 hospitals. The facilities reach from Washington State along the west coast down to Texas. They include states throughout the Midwest and as far south as Georgia.

The merger created the largest not-for-profit health system by revenue in the country. The $29 billion mega-system focuses on solving national health challenges, according to one of its CEOs.

There have also been deals that haven’t been consummated. Not every merger that is discussed or negotiated ends up as a done deal.

It should be remembered that hospitals and health care systems are a business. Whether they are for-profit or not-for-profit, they have obligations to shareholders, the local community, the state, employees and patients. That last group is always the priority focus, but the rationale behind a merger or acquisition is also targeted at improving business metrics, offering more services and strengthening balance sheets.

Smaller hospitals and systems are merging with larger hospitals to ease financial and regulatory pressures. Some also do so to increase credit ratings. Mergers allow health care providers to “scale up” in an effort to cover staff shortages. Some of the largest mergers of 2019 did not involve hospitals, but included the merger between CVS and Aetna and Total Health Care and Priority Health.

A positive business climate during 2018 and 2019 provided the right environment for many health care businesses to pull the trigger and make what is often a risky, but calculated, business decision.

This year was thought to maintain the same pace, but a strategic focus may replace financial incentives.

All departments in a health system have to prepare for, and adopt to, the changes that are part and parcel of a merger. There may be an existing culture, among both entities, which is similar, such as the CHI and Dignity Health merger, or one contingent of employees will have to adopt the other entity’s culture.

Many of these changes impact the HTM department, both the corporate culture changes and the changes to procedures or in vendor relationships. The familiar salespeople may go away.

As an HTM department, or staff member of an HTM department, there is no reason to confront an impending merger or acquisition uninformed. Because of the number of past mergers, several members of HTM leadership have garnered experience and insights that can be beneficial. Here are a few examples.

When knowledge of an impending merger becomes known, how does an HTM department prepare?

“The heads of each HTM department met well in advance of the merger to discuss the blending of two large and successful departments. On the support side, we prepared for what we would need to do to accommodate an influx of new technicians – training, CMMS usage, and supporting from another state, among other things,” says Greg Czajka, CBET, supervisor, healthcare technology management at Advocate Good Samaritan Hospital, part of Advocate Aurora Health in Downers Grove, Illinois.

Beyond training and information for new colleagues, there is also the need to speak the same language beyond the esoteric “biomed speak” that is understood. There is also the set of terms that may be peculiar to members of one employer and the procedures that are understood by one group that must be shared.

“There was a big push for standardizing nomenclature, models, PM frequency, etcetera. Clean data with connectivity data — I.P., Subnet, AE title, OS version, etcetera — helps when changing CMMS. Basically, dot the I’s and cross the T’s so that your records can be transported to a new CMMS if needed. Be the consummate professional,” says Scott Ostrand, CBET, CHTM, manager of clinical engineering at CommonSpirit Health in Lincoln, Nebraska.

There may also be a need to adopt a new career progression formula and salary schedule.

“When we merged, we reviewed each facility’s CMMS and decided collectively which one we would use and then simply imported the data from the other’s CMMS. When we were acquired, our inventory and locations were all put into their system. We adopted all their job descriptions pay scales and technical ladder,” says Jim Fedele, CBET, senior program director of clinical engineering, BioTronics at UPMC in Williamsport, Pennsylvania.

Policies and procedures are time-tested and formulated, often over several years, through committees, technical writers and out of experience. They are most often specific to an organization although there can be some standardization as well.

“I have been through both a merger and an acquisition, even though they are used together, they are very different,” Fedele says.

“When we merged with the local hospital down the street, we reviewed policies and combined them where it made sense. Biomed policies, for the most part, are pretty standard so it isn’t like it is a major change. Also, when we merged, the hospital I worked at was a Service Master account, the other hospital was an in-house program. Executive leadership chose to merge the other hospital program with Service Master, so essentially all policies and procedures were adjusted to support the Service Master program,” Fedele adds.

He says that when they were acquired, they adopted the purchasing entity’s policies with minor adjustments for the situation, layout and support system.

“Cultures come from the top. It is important to be the change agent and buy in. If you truly do not support the new organization’s methodology, and forming culture, you must leave it. The policy manuals are reviewed by a committee and any changes or official adoption is at that level. Site specific HTM departments do not have policies, but can keep guidelines for general practices,” Ostrand says.

What are some of the major considerations when an HTM department knows that a merger is imminent? Preparing for change and adopting the best mindset are key.

“It’s imperative to keep up employee morale. Managers need to lead and also root out negativity. You must be open with communications and interactions. Morale is contagious. Low morale is not good for retention and retention keeps your core technologies, crucial customer relations, proprietary knowledge and vendor/industry relations,” Ostrand says.

He says to start by showing a dedication to the new organization. Talk about the “alliance,” not the merger.

“Respect confidentiality when the two organizations are performing due diligence. In general; be positive,” he says.

With the merging of different HTM cultures, a concerted effort to meld best practices can result in a stronger combined entity.

“Each system HTM lead needs to evaluate their own processes and be ready to bring their successes to the table. Neither system is perfect and each side should know what best practices they have so that they can be shared and hopefully integrated into the final product,” Czajka says.

He says that when Advocate and Aurora merged, he found that they took processes from both sides to make the new system successful.

How do you join two asset inventories; or do you? What do you do with an expanding database?

“Our circumstances were unique because one of the two systems were going to transition to an in-house program at the time of the merger, so there was not much of a choice as to which CMMS would be used post-merger,” Czajka says.

He says that they had to transition everyone onto the one that was used within Advocate since their program was established.

“We worked with the CMMS vendor to determine how to import all of the new inventory into it. A great deal of work had to be done because of differences in equipment coding between the two systems, but it was ultimately a successful implementation,” Czajka adds.

Regarding the conversion of inventories, Ostrand says that much of the legwork was done ahead of time.

“In our case, we had our IT work with their teams to convert their inventory to our CMMS prior to the official go-live date. During the official go-live, a team of our managers and administrative staff went to the new locations for a two-week stay and acted as a liaison to the managers. Most HTM departments are very similar in behavior. We are there to guide new staff and to help them adapt to the new ways,” he says.

The Whole is the Sum of its Parts

With any merger that brings together separate and distinct biomed departments, there are considerations that include CMMS, personnel, assignments and leadership. Preparations have to be started as soon as possible and groups of technicians have to be merged.

How do you merge two HTM departments into one?

“The toughest challenge we had was integrating 90 technicians into a new CMMS while still supporting day-to-day activities,” Czajka recalls.

“We had to plan training sessions and provide ongoing support to a wide-spread group of individuals. We also had to quickly acclimate them to a new equipment service call process,” he adds.

Czajka says that there are a lot of routine activities that we take for granted, which can be a tall hurdle to overcome when changes are made to them on a large scale.

The process does not occur overnight and often it is accomplished in stages.

“We really have not merged fully. The overall framework is in place and we continue to roll out our ‘product,’ but new sites continue to on-board. Overall, we respect the existing managers and their teams. Each geographical market has an operations director that oversees the territory. We generally have not changed the existing personnel and assignments,” Ostrand says.

HTM leadership has to consider every facet of the new organization and prepare.

“Every time I have gone through this, I start preparing inventories for export. I get my employees to update their resumes so they can show off their skills. I gather all the information about our program that I can from policies to contracts so that information is ready for those who will be working with us to integrate to the new system,” Fedele says.

He says that most importantly, he sets his mind to accept the change and does what he can to make the transition easy for his staff and tries to not be a barrier to the process.

“The sooner you realize the change is going to happen, with or without you, the better you will be,” he says.