Posted By: K. Richard Douglason: August 01, 2016In: Magazine, Professional of the Month, Spotlight

For many people; you never know where life will lead. That truism has application among many biomeds as well. One day you start your own business and another, you get recognized by your peers with a statewide award. Some things are carefully planned and others are a complete surprise.

Bart Onoday, CBET, started his own business, Cascade Medical Services LLC, in late 2015. It was the result of careful planning and implementation. In sharp contrast, Onoday’s recognition as winner of the Oregon Biomedical Association’s 2015 Biomed of the Year award – was a surprise.

“I really didn’t know the career field existed until I was in the U.S. Air Force. While working in the hospital, I was curious about the role of some of the Airmen working on broken medical equipment,” he remembers. “I talked to one of them and he mentioned I could get out of the Air Force and be successful doing this type of work. It interested me much more than the career I anticipated developing from my medic role,” Onoday says.

He enrolled in a biomedical service technician program at Spokane Community College and completed the two-year program. He had found the program while doing research before he left the Air Force.

“There was a program conveniently located in my hometown. The program was challenging, but there were thorough and motivating instructors. I graduated from the program in 1998,” he says.

He went to work for a large HMO hospital in Seattle and worked there for two years. He then moved to Oregon and took a position with a small community hospital as a general and surgical biomed. He stayed there for the next five years.

At this point, he took a slight departure from what he had been doing and took a position in sales and service for an anesthesia-specific equipment and supply house for the next couple of years.

“I then began my career at a university hospital in Oregon, specializing as a biomed in surgery, anesthesia, lasers and special projects, leaving to begin my own business after eight years in the setting,” Onoday says.

Being self-employed had been a dream of Onoday’s for many years and it was very familiar since his father was a business owner. When a vendor of the hospital retired, Onoday eventually bought out his company. The business did not do a lot of biomed work, more mechanical, but it provided a customer base to build from. 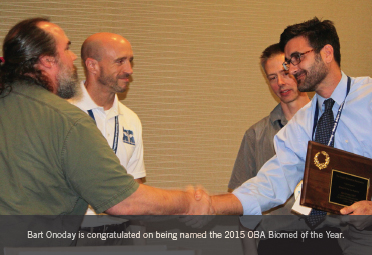 Starting a business is no easy feat. Onoday characterizes it as his “greatest challenge.”

“It has also been the most gratifying,” he adds.

“It was a huge undertaking to simply take the first step. There was tremendous research, planning, legal preparation, courses, and consultation. As for special projects, one of the more interesting was a project for building out surgical suites, which included an addition of a hybrid room, HD integration upgrades, and an interdisciplinary approach with teams, including cath lab, cardiac surgery [and] interventional radiology,” Onoday says.

The desire to become a business owner grew from watching his father.

“My father was a huge influence in my aspirations to become a business owner. He will soon be retiring from his own low-voltage business that has had great success since he started it in 1985,” Onoday says.

While Not on the Job

In his non-working hours, Onoday seeks adventure and finds satisfaction through do-it-yourself projects.

“I have a passion for motorcycles and the outdoors. I have recently enjoyed adventure riding including backcountry routes to Canada with my best mate, Sean McKeown,” he says. “I visit Mexico often and am planning an adventure ride through Baja. I enjoy working with my hands on projects at home and recently undertook a full remodel of our family’s home and enjoyed the accomplishments of doing much of the work with my wife.”

Time with family is a priority in Onoday’s life.

“I have been married to my wife for almost four years and have a step-daughter who is a sophomore at University of Oregon studying business. My parents, sister, brother-in-law, and children live in Washington. They are very important to me and are a big part of who I am,” he adds.

He says that the family connects as often as possible, which he says, is never enough.

The biomed of the year award caught Onoday by surprise. His wife knew he was going to get the honor ahead of time, but Onoday had no idea. He had been working outside the conference’s main room, checking in members. His wife came to get him and tell him to come into the room. He was really surprised to hear the president say his name, when announcing the award.

“It was an honor and a surprise to be the recipient of the second-ever Biomed of the Year Award,” he says. “I only became aware of the award at the Oregon Biomed Association annual conference last fall. I appreciated that the award came from the nomination of peers, and I did not expect to be so positively recognized by my colleagues. The fact that those that I so greatly respect would recognize my accomplishments means a tremendous amount to me,” Onoday adds.

He is a proponent of association membership and is an officer with the Oregon Biomedical Association.

“I am currently the treasurer for the group and am glad that I took the leap to be involved. I was unsure I could devote the time and effort needed, but I am very thankful now for the opportunity to work with the board of the association and learn about the value that the OBA brings to its members,” Onoday says. “I encourage all biomeds to consider volunteering to help advance our profession, whether with this organization or others that support our goals.”

If the recognition by his peers is any indication, the future of Onoday’s small business should be on the right course for success.