Posted By: K. Richard Douglason: May 31, 2019In: Magazine, Professional of the Month, Spotlight
Print Email 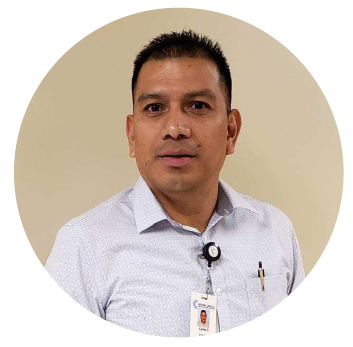 It gets hot in Bullhead City, Arizona. The temperature in the city, which is located across the Colorado River from Nevada, in western Arizona, can be 112 degrees in the summer. Thankfully, for those who like to escape to the water, there is some relief and enjoyment.

Although Rodriquez came from a medical family, he took a different route when entering the health care field.

“Coming from a family already in the health care field, my father used to be a physician and my mother a nurse and due to the necessity to make a change in my life, I decided to enroll in a field where I could fix medical equipment,” he says.

“Initially, I was looking for something to be completed quick, like an associate’s, but I ended up in a university and completed a full bachelor’s degree in biomedical engineering. Now I have the bachelor’s, an MBA and AAMI CBET certification,” Rodriguez says.

Rodriquez’s biomed education came as a combination of formal schooling and on-the-job training with a dash of mentoring.

“For education, I attended Devry University in Phoenix, Arizona and I just completed the internship time required by the school; it was just a couple of months that I completed in Banner Estrella Medical Center focused on Carefusion/Alaris pumps and beds,” he says.

“I was lucky, because in my first job at Western Arizona Regional Medical Center, I was hired for a team of two biomeds with a lot of experience and knowledge and I spent two years back to back with one of them (Frank Evans). He was the one who decided to hire me. He saw my resume, full of education, and he didn’t care about extensive experience and hired a smart guy full of knowledge ready to be trained,” he says.

Over the past seven years, Rodriguez has held positions at the Phoenix location and at his current facility.

“My first position was biomed technician internship in Banner Estrella from March to May of 2012. My second position was biomedical engineering at Western Arizona Regional Medical Center from December of 2012 to June of 2016. I stayed in this position for almost four years, but at the same time, I started to do tasks that belonged to the biomedical supervisor position. Finally, I was promoted as a biomedical engineering director in June of 2016 and I’m still in this position today,” Rodriguez says. 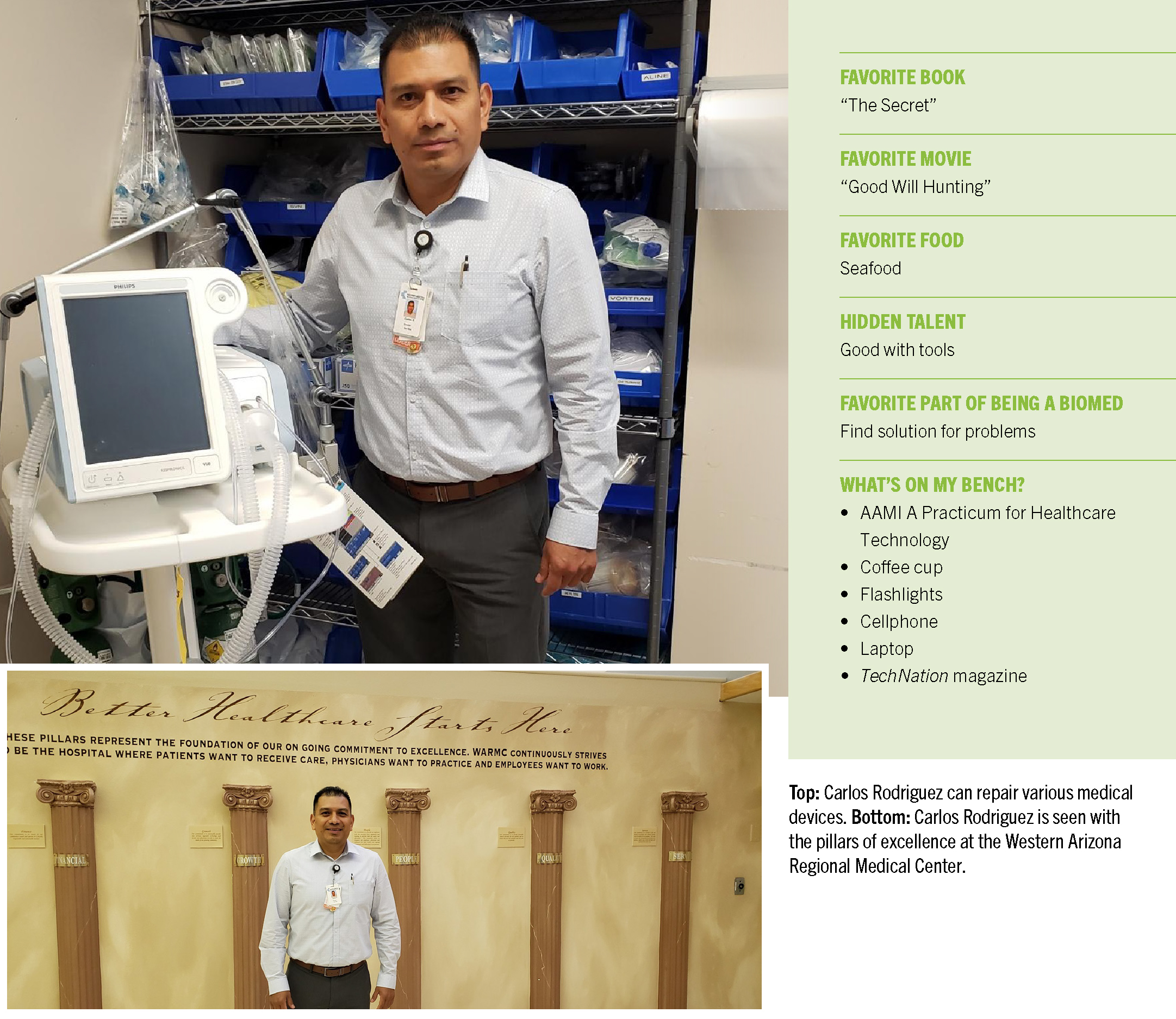 Rodriguez reflects on the role of the HTM professional and remembers a couple of first-hand challenges with new technology.

“As HTMs, either technicians or leaders, we face challenges every day. When we talk about broken equipment, [it] could be something as simple as a broken bedside monitor that can potentially close a room or a broken anesthesia machine than can cancel procedures for patients; a bigger challenge could be a problem with the water system used in the SPD department that can stop the OR department,” he says.

Rodriguez says that additionally, they evaluate a lot of special projects.

“For example, now we are in the process of buying new pumps for infusions. The input from the HTM department is critical because we are the ones who said if the old device is no longer supportable – no parts and/or service is available – and at the same time we need to identify in advance how the new equipment will be supported. In this case, we need a lot of coordination/communication with clinical department to made the project successful. At the same time, we are evaluating to replace our current patient monitor system, bedside monitors and telemetry, and we need to evaluate different technologies or vendors in the market before we make a final decision,” Rodriguez says.

He says that the main challenge is being the technology manager for medical equipment/systems to ensure patient safety.

“A year ago, with coordination with pharmacy and clinical nurse leaders, I made the recommendation to our administration to replace the infusion system equipment and now we are ready to go live in early May,” Rodriguez says.

“Several years ago, the anesthesia machines were replaced. I was in charge of completing the coordination with several vendors to try their units until we found the perfect model that met each and every one of our needs. I supervised the whole process until the in-service (training) was completed,” he adds.

When living in a hot climate, a good escape is to find a source of water and jump in.

“I love summer weather here in Bullhead City. We have a beautiful river and lake, so I spend a lot of time swimming,” Rodriguez says.

He is talking about Lake Mohave and Big Bend Park on the Nevada side of the river. Lake Mohave is located north of the sister-cities of Laughlin, Nevada and Bullhead City. Along with the Colorado River, the bodies of water provide an escape from the summer heat.

What is Rodriguez’s approach as an HTM professional?

“I’m the type of person that presents solutions; not problems. I think that if you do something, anything, whether a simple repair or a major project, it has to be done right the first time. Completing tasks both quickly and efficiently is key in everything I do,” he says.

The solution to keeping medical equipment running is to have a competent biomed like Rodriguez. The solution to 112 degrees is a quick dip in the lake.