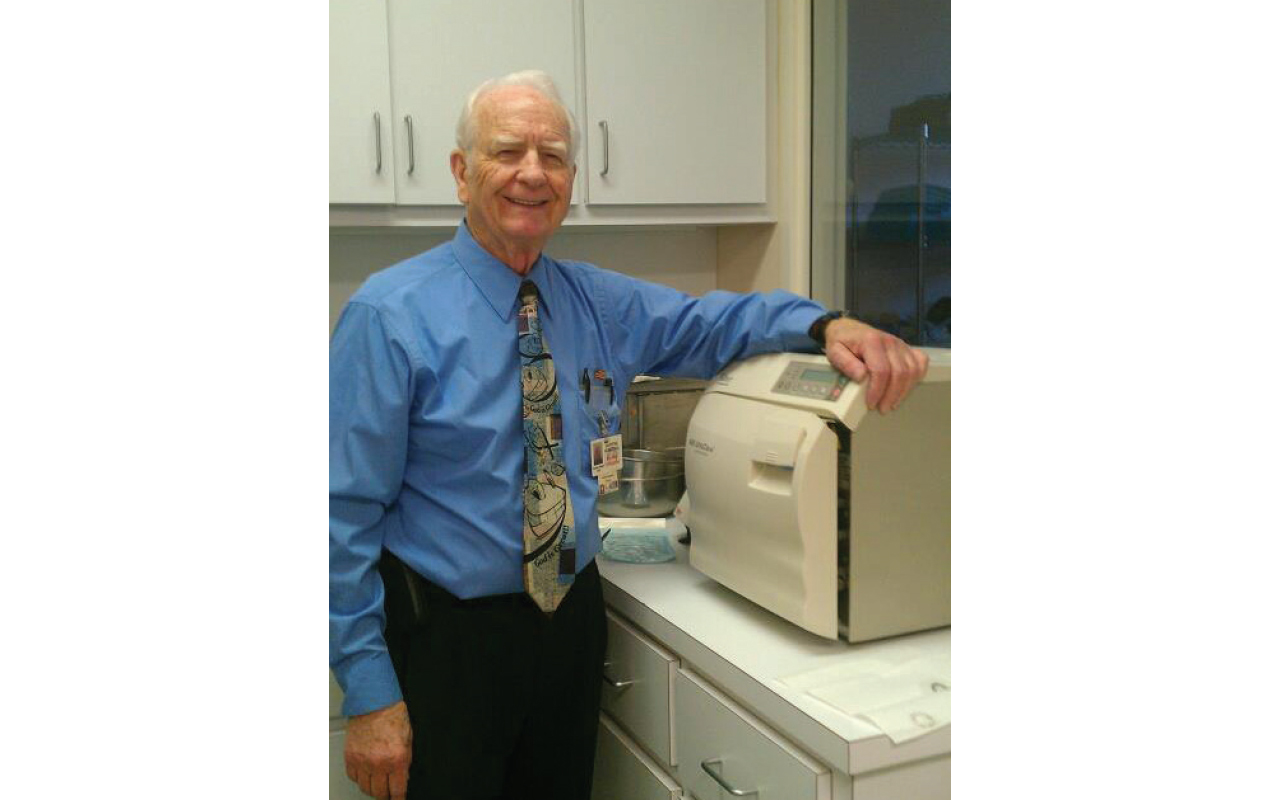 If working for free were an option for them, some people would do it every day just to be a blessing to others. Charles Medlin, who owns Certified Biomedical in north central Texas, is one of those rare people.

The 82-year-old small business owner has been an HTM professional since a happenstance occurrence in 1970, when he was 39. “Actually, I had no initial interest nor knowledge of the biomedical profession when I was asked to interview for a vacant civilian position in the Medical Equipment Repair Course (MERC) at Sheppard Air Force Base in Texas in 1970. I had the technical experience required for the position and had been working as a technical illustrator, which fit in their plans for course development by having an illustrator in house,” he says.

“As I was being shown the Blocks of Instruction, my initial feeling was, ‘Wow, awesome!’ then, ‘I’ll never learn all of this.’ But thanks to a great group of instructors, I was able to become a member of the team in a short time. From that time forward, I was hooked and wanted to become the best biomedical technician possible. In 1974 I was privileged to take the certification test and received CBET certificate number 0238. Then in 1976, I received a BS degree from Wayland University along with a number of instructors in the course. I took every opportunity offered to gain experience and knowledge in the field while in the course from 1970 to 1979.”

The instructors at the MERC took Medlin under their wings, giving him the instruction and guidance he needed to “become proficient in the subjects being taught.” From 1976 to 1986, Medlin worked for the instructors’ local biomed company. He was also an Air Force reservist IMA assigned to the MERC from 1980 to 1991. His role for six of those years, from 1980 to 1986, was as a GS-12 training advisor acting as liaison between the Air Education Training Command (ATC) and the MERC.

Medlin was recognized with the Air Force Individual Mobilization Augmentee Reservist of the Year award in 1990.

Hanging Out a Shingle

Sometimes the idea for the name of a business comes from a series of circumstances, and sometimes it just seems like divine intervention. “The name Certified Biomedical came about during correspondence with the North Texas State Hospital. My return address included Charles R. Medlin, Certified Biomedical Equipment Technician, and they addressed my return mail to Charles R. Medlin, Certified Biomedical. I liked the sound of that and contacted a person associated with the Certification Commission to see if I could use the name. I was told to their knowledge it was not patented, so I registered it with the State of Texas.”

“I set up my little biomedical equipment inspection and repair business in 1986 to keep me busy after retirement and to escape my wife’s honey-do list that kept growing longer. I didn’t advertise, but my clients increased by word of mouth to the point it is today. My intent was never to make a lot of money, but to provide inspections and repairs of equipment in the rural areas of North Central Texas for a fair price.”

When some of Medlin’s customers had to declare bankruptcy, Medlin did the right thing. “My dedication and commitment to serve my clients has been challenged three times when three facilities I served declared Chapter 11. My philosophy was [that] the personnel working there were not at fault for what the management companies had done. They still had to meet requirements of Medicare and/or The Joint Commission as long as they continued to function. So I continued to fulfill my commitment to them as long as necessary without being paid.”

“My motto has always been ‘Do unto others as you would have others do unto you.’ I have been greatly blessed in being surrounded by loving family and friends who are ready at a moment’s notice to provide any assistance they can give when the workload becomes too great. I especially thank my darling wife who has been my front office and Jane of All Trades for all these years. Her physical and prayerful support has encouraged me from day one.” 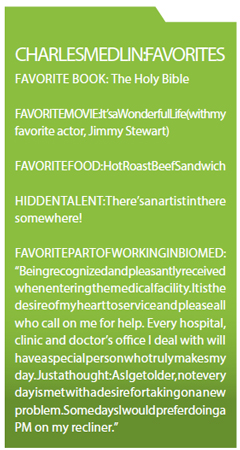 “I earnestly try to practice honesty, integrity and fairness in all my dealings,” Medlin says. “I like all people and want them to like me. My rewards are their expressions of gratitude. Money has little to do with it. Relationship is the greatest motivation for what I do. If you don’t believe that, you don’t know me.”

Medlin is humble about what he does and gets embarrassed by having any attention focused on him. “I just love people and doing things for people. I do things cheap. Well, some call it cheap. I call it being helpful. I work with small hospitals and some doctors. Contrary to what people believe, all doctors are not rich. So if I can help somebody that’s helping somebody, you can call that paying it forward, but I just call it my job.”

The paying it forward concept has also been something of an equipment ministry for Medlin. “I had a service call from a small hospital whose EKG machine wasn’t printing out right. I met an ER physician there named Donna Ivy, who has a medical ministry in west Africa. I got to talking with her, and I think God directed me there to meet her. She was going over in a month (this was last summer), and she asked if I knew someone who had an EKG machine. I had three or four of them. A few months before that, a lady who operates a wellness center said ‘could you use an EKG machine?’ It was a portable, battery powered unit. I checked it out, and it worked fine. I charged the battery, and when Donna said that, I said, ‘I think I’ve got exactly what you need.’ So I rushed it to her. I never charged a fee for that.”