Professional of the Month: Daryl Gaza

Posted By: K. Richard Douglason: June 30, 2017In: Magazine, Professional of the Month, Spotlight 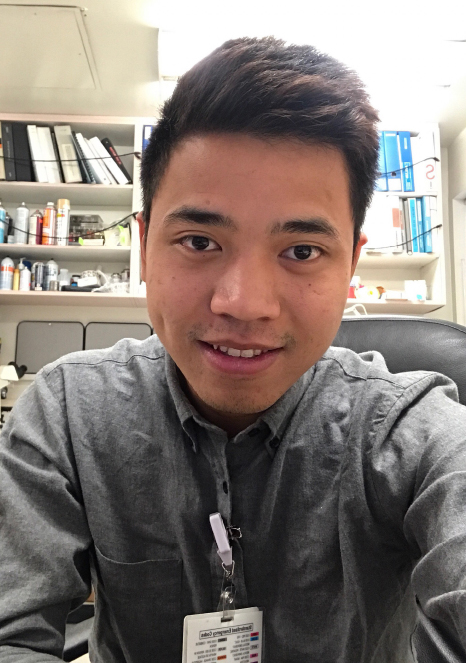 One of the primary reasons that many clinicians go into the health care field is to help improve the outcomes for patients. This same reason motivates many biomeds as well. It may just seem more obvious in the case of those who actually treat the patient than for the people who work on medical equipment, but the motivation for many biomeds to enter the field is grounded in this same goal.

Another way that many HTM professionals have found to help people is by volunteering with organizations that help those who are in regions that are impoverished and regions that have fewer medical resources.

“I went to biomed training; that’s when I went to school to get my certification in biotechnology at the Southern California Institute of Technology (SCIT) in 2012. While I was in the school, I realized that it’s hard to get a job in this field if you don’t have any experience. That is why I decided to apply for an internship at Giving Children Hope as a biomed equipment technician,” Gaza explains.

Giving Children Hope was founded in 1993 and is a faith-based, not-for-profit organization that sends supplies, including medical supplies and equipment, to some of the world’s most poverty-stricken nations.

“While  I was doing my internship, everyday I’d learned different things in the biomed industry. I realized also how important this career is [as it] involves patients’ lives,” Gaza says.

Gaza soon realized that he also needed practical experience working in a hospital environment, to go with his work at Giving Children Hope that primarily entailed fixing medical equipment.

“That’s when I volunteered at Fountain Valley Hospital, not as a biomed, but to escort people to go to the different departments. I know it is not a biomed thing, but at least I got a chance to get experience in the hospital world. This experience led me to my first job as a biomed technician,” Gaza says.

Before the internship, the decision was made to enter the program at SCIT. Gaza liked the idea that the biomed field merged two interests of his.

“Well, back when I was in the high school, I had this mindset that by the time that I will start working, I will choose a career where I can expand my knowledge in the health care industry and also do the things that I love to do, like fixing electronic equipment and troubleshooting problems,” he says. “That’s why, when I heard about biomed, I didn’t hesitate to take that course because this [is a] career that has the combination of health care and electronics.” 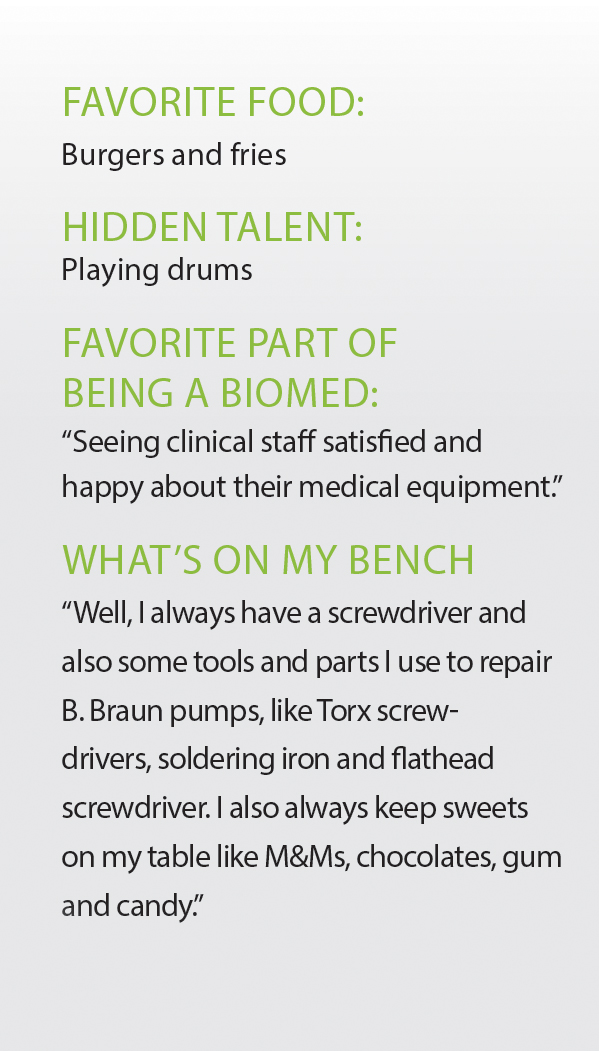 Before taking on his current position with Garden Grove Hospital, Gaza was working at Centinela Hospital. Prior to that, he spent about half a year working for St. Jude Medical in Irvine, California as a medical assembler. His job required catheter tip soldering, handling paperwork, and using a microscope.

The move to Garden Grove from Centinela was mostly a logistical one.

“Since I went back to school, I requested to move and work here at Garden Grove Hospital,” Gaza says.

“This hospital is much closer to my current school right now. As of now, I am currently working on my bachelor’s degree in biomedical engineering at SCIT located at Anaheim, California. I will finish in May of 2018. My goal in the future, after school, is to take the CBET exam, then be a specialist in radiology equipment,” he adds.

Although a general biomed, Gaza does specialize in one manufacturer’s product line.

“I am a certified B. Braun specialist. I calibrate, program, repair and perform PMs on B. Braun Infusomat IV pumps and B. Braun Perfusor, Syringe and PCA pumps. I am repairing not just our own B. Braun IV pumps in Garden Grove Hospital, but also the IV pumps from the other hospitals in Prime Healthcare which is more than 40 hospitals,” Gaza says.

Hard Work is the Answer

Gaza says that most of his regular duties are fairly routine, but he recalled one instance that was a little out of the ordinary. It impacted another one of the Prime Healthcare hospitals.

“Centinela Hospital was having a power shutdown because engineering needed to fix something in the regular power supply,” Gaza says. “So, basically biomed needed to make sure that all the medical equipment that plugged into regular power was moved to emergency power, especially those ventilators that were connected to patients.”

“We had to make rounds around the hospital and informed all the clinical staff about the project,” Gaza says.

When not working, Gaza likes to play basketball and watch movies.

Asked what readers should know about him, Gaza points to his belief in a strong work ethic.

“[What] I would like the readers to know about me is that I am one of the people that has a big dream, but also know that to accomplish all of those dreams, I have to work hard and give everything that I have,” he says.

We think that with that approach, dreams can become a reality.