Professional of the Month: Derick Davis, CBET, A+

Posted By: K. Richard Douglason: June 01, 2017In: Magazine, Professional of the Month, Spotlight

In any job, it’s good when management can recite some of your strengths and accomplishments.

“Besides becoming an outstanding technician, he has developed into a leader within the department. In his short time with Baylor Scott and White, Derick has been promoted twice and become a go-to tech for anything patient monitoring. He is a CBET and A+ certified,” says Carol Wyatt, MPA, CHTM, CBET, director of the Northern Region for the Healthcare Technology Management Department at Baylor Scott and White in Dallas, Texas. 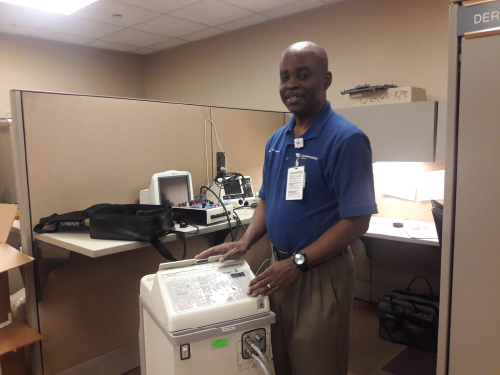 Davis’s route to finding HTM involved a series of detours before he landed in the HTM field through divine intervention, as he tells it. Moving from a tough location on the West Coast, he ended up going to college on the other side of the country. He was born and raised in South Central Los Angeles and attended college in Washington, D.C.

“I graduated from Howard University with a degree in finance. At that point, I felt that I had it made and that I would be able to pick and choose where I wanted to work; well it didn’t turn out exactly that way,” Davis recalls.

For a time, he worked for the Los Angeles School District, but felt the call of entrepreneurship beckoning, so he started a classic car business, which he says was very successful.

“We moved our family to the Dallas area in 2005. I found a job doing Internet sales on eBay, which I really liked because I sold cars on eBay, when I had my business,” Davis says.

“After being there a year and a half, and seeing the company go out of business, I ended up getting an opportunity to head an online sales department with a rent-to-own company. I was very excited about this opportunity; the director even mentioned that we could make six figures,” Davis adds.

“I have been at Baylor for over three years and can truly say that this is the best job I have ever had. And, when I look back on my journey, I can truly say it was well worth it,” Davis says.

The assurances and the position did not turn out as promised and devolved into a lower level position.

“I couldn’t believe the path I was headed; here I was cleaning appliances until one day God said to me, I have something better for you than this,” Davis says.

That better thing, of course, was the HTM profession. Divine intervention pointed him in the right direction.

“I found out about a career in biomedical equipment repair after talking to my brother-in-law David Simon. I have always liked to fix things, even when I was young, and I found out that they make a good salary with good benefits,” Davis says.

Favorite part of being a Biomed:
“Interacting with others, working on equipment, coming up with new solutions, and being an important part of a hospital.”

What’s On My Bench
Coffee, Lawson Procedures, Digital Multimeter, EKG simulator, A card for my wife

“The only thing is that there are only a few colleges that grant degrees in this field, the closest one to me was in Waco which is 70 miles one-way from my house,” Davis explains. “I also wanted to go full time so I could get it out of the way, so I ended up quitting that job and I enrolled at Texas State Technical College (TSTC) in the fall of 2011. I would make that 140-mile round trip to school for five semesters.”

Davis had heard that TSTC’s program was one of the best in the country and he felt that the fact that the program included an internship made it an excellent choice.

“The instructors, directors were all helpful and very supportive. Their goal was to get me in the field and it showed,” he says.

Davis’ efforts paid off as he graduated with a 3.85 cumulative average.

Once he was out of school, he did some brief contract stints with GE and Spacelabs. He ended up getting an interview with Baylor Hospital in Carrolton, Texas, an hour from his house. He later learned of an opening at the medical center in Dallas. Four interviews later, he got the job in Dallas.

“I have been at Baylor for over three years and can truly say that this is the best job I have ever had. And, when I look back on my journey, I can truly say it was well worth it,” Davis says.

On the Job and Off

While he works on many routine projects, Davis’s specialty areas include Philips monitoring, labs and networking. He also finds time to train others.

“I have been involved in several projects at the hospital; some of them were the installation of client bridges used to monitor children’s vitals (pulse ox and patients on ventilators), upgrading software on Philips telemetry devices, obtaining alarm records from both GE and Philips monitoring to assist with alarm fatigue studies and I also gave training classes for fellow biomeds for the CBET exam,” he says.

Monitoring and networking are also a part of his daily routine.

When not on the job, Davis enjoys classic cars and fishing. He has been married to his wife for 21 years and has three daughters and a son.

What should TechNation readers know about Derick Davis?

“That I love the field and that I feel the need to share knowledge [which] should be a part of every biomed tech’s DNA,” he says.

For a guy who took such a meandering route to HTM; he finally found his true calling.