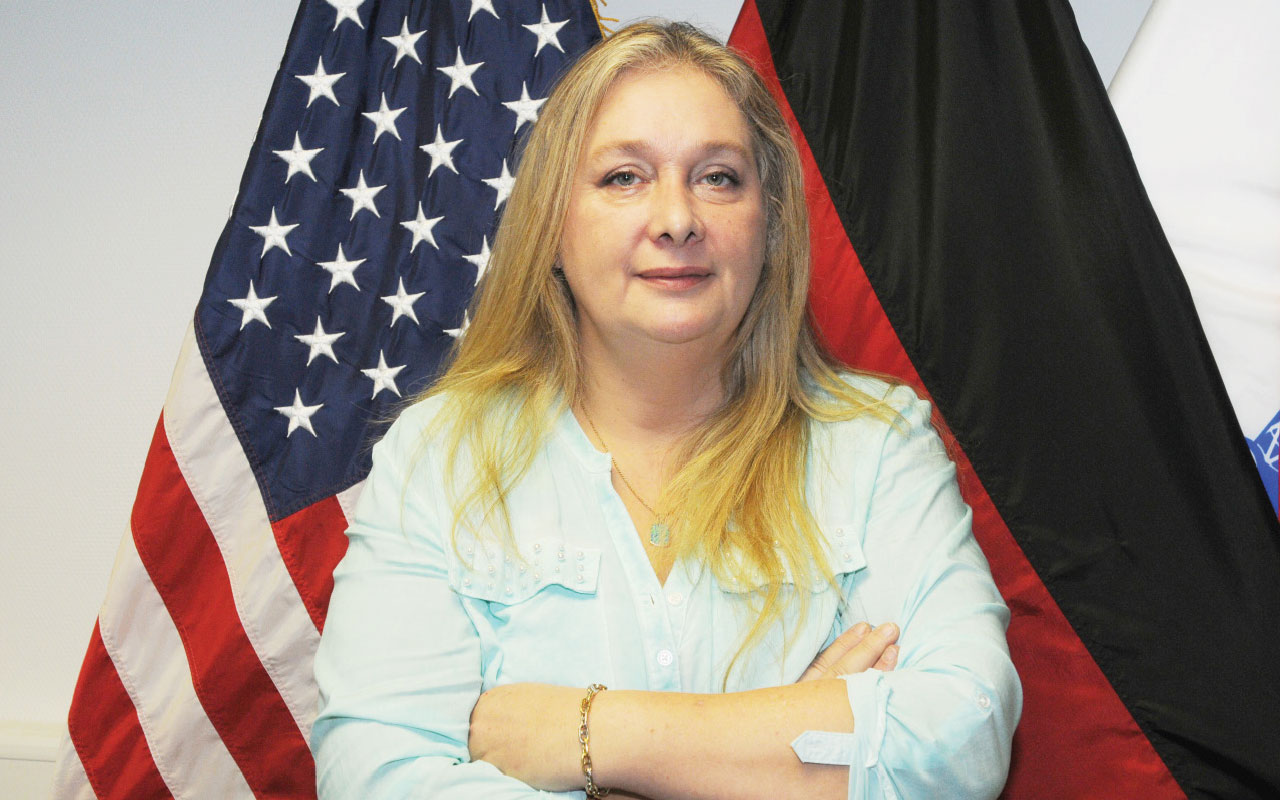 Posted By: K. Richard Douglason: March 01, 2019In: Magazine, Professional of the Month, Spotlight

When former president George H.W. Bush died recently, a biomed, originally from Belgium, had extra reason to reflect with sadness on the his passing.

Digby’s road to becoming a biomed started when she was still young and was influenced by her father.

“As young as I can remember, I have always been interested in dismantling and rebuilding machines. I received a small radio for my first communion. I took that radio apart and put it back together in my bedroom, over and over. I was about 10-years old,” she says.

“My father was an engineer, and together we spent many hours discussing blueprints and designs around the kitchen table. To this day, I must draw schematics when explaining anything to others,” she adds.

“When I joined the Army, I was offered several positions, but the most interesting and intriguing one was in the biomed field. Although I truly didn’t know the details of the field, I knew it would combine several aspects of sciences, which fit my personality,” Digby says.

“The cycle of classes I attended combined a curriculum that was previously two stages into one longer, all-encompassing course of nine months of training,” Digby says.

“There were challenges; I was still a green card holder (originally from Belgium), and my English skills were only at 50 percent. There were two-thirds attrition rates, and one tragedy occurred in my family, interrupting my learning for 10 days, but I persevered and graduated with 12 others from an original 39 in class 10-88 (GY1),” she adds.

Coast to Coast and Presidential Duty

Digby has not only seen Europe, but has lived on both coasts of the U.S.

“I was stationed at Cutler Army Hospital at Ft. Devens, Massachusetts (private first class to sergeant). While serving there, the Secret Service hand-picked me to service all equipment at the presidential compound in Kennebunkport, Maine as an additional duty for almost two years, while the 41st President (George H. W. Bush), his wife and mother would come on vacation,” Digby remembers.

“I then moved to the 46th CSH (combat support hospital – field unit), also on Ft. Devens, as NCOIC (non-commissioned officer in charge) of the biomed department, until the unit disbanded and the military post closed,” Digby says.

She says that she left the military, raised her two children for three years and followed her husband, who was still in the military, to Fort Detrick, Maryland.

“My husband then was transferred to Washington state in 1999, so our family moved again. I worked for two years for Providence St. Peter Hospital; part of a two-man team, servicing three hospitals and 80 private practices around the state,” she says.

“In 2002, I applied for and secured a biomed position at Madigan Army Medical Center – also in Washington – and rejoined the DoD/Army environment as a civilian,” Digby says.

“In 2015, while at the Madigan shop, now called Clinical Engineering, I was offered the opportunity to create a new cell in the biomed department, as a quality assurance, quality control specialist,” she adds.

For people like Digby, who has been a female biomed in a male-dominated field for many years, there have been a few challenges.

“If you look at the biomed field – and I am specifically speaking of my experiences in the mid ’80s, the ’90s and the early 2000s – there weren’t very many females in the field. I see that now, there is more emphasis in the military in particular, to have women trained and working in technical fields, but at that time there weren’t any. While working as a technician, I think I only worked with three other female technicians and, of those, I only know one who is still a biomed,” she says.

“So, the challenge has always been to be more versed, more educated, more self-trained and work harder than any other technician to be a step ahead. The cultural stigma of having a woman not be able to understand or interpret technical drawings and involved technical data and literature can handicap weaker or less trained individuals. I strived to always know as much as I could to be able to teach; thus, proving that women actually do belong,” Digby adds.

“I would challenge managers to apply the same interviewing criteria to men and women – which legally they should, but seldom do. I also had a language barrier for the first few years, which I overcame. I really look forward to challenges, because for me, they’re just a motivator,” she says.

She says she has been involved in several special projects. One of the most recent was while she was at Madigan, a new database was implemented in May 2014, called Defense Medical Logistics Standard Support (DMLSS).

“In order to transfer all capital equipment and services, I volunteered to review every record in our database and upload them manually into the new database. That project took over one year of two to three hours of work after my regular biomed shift, and all my weekends until complete. This project was tedious and challenging, and I was alone, but it empowered me to learn the new database like no other could,” Digby says.

She says that following the conversion, a handful of people formed a team to create a dynamic catalog which would combine the ECRI nomenclatures and Army guidelines for supply chain acquisition numbering, and created the Nomenclature Standardization Initiative (NSI).

“The numbering sequences and universal medical device nomenclature system (UMDNS) were used to standardize all medical equipment in the DMLSS database, which require clinical engineering maintenance. In standardizing nomenclatures and also manufacturers, we streamlined the work of our technicians, and lowered the risks of patient safety incidents. We also structured the maintenance plans for better adherence to the Joint Commission’s environment of care elements of performance, manufacturer’s service schedules and FDA guidelines,” Digby says.

She says that she reviewed patient safety reports, and created investigational procedures; alertly responded to all manufacturer and FDA recalls.

Watch What You Say

When away from work, Digby likes to travel around Europe and attend flea markets. “I like to collect little houses – handmade representations – from all over the world. Not many hobbies, work encompasses every aspect of my life,” she says.

She has a 25-year-old son, Alexander, who is a boilermaker in Washington State and a 24-year-old daughter, Katrina, who is attending college for nursing. Her stepson is currently deployed with the Air Force in Qatar.

“My husband just retired this year (2018). He served 23 years as an active duty Army soldier (also a biomed), then served as a civilian technician at Madigan Army Medical Center for 14 years (as a biomed). We worked every day, in the same shop at Madigan. He is now in Germany with me,” Digby says.

Her mom lives in Belgium.

“We enjoy visiting her about once a month, since we are only about a four-hour drive away from her. And, I have a brother in Paris,” she adds.

Digby would like readers to think about the esoteric language that they may use on the job around customers; it can hinder progress.

“We get so wrapped up in our little worlds, that we forget that each department of any organization, is a customer of the next department. In order to function efficiently, communication and collaboration should always be the main focus. We tend to use internal jargon and acronyms, which degrade communications, especially in the Department of Defense,” she says.

“I have a sign by my desk which states; ‘I speak English, French, some Croatian, some Dutch, and understand other languages. Please do not speak to me in acronyms.’”

She says that she also does not believe in ranking people by their paycheck, but by their intelligence level and their drive.And, on that last point, Digby has proven to have an endless amount.