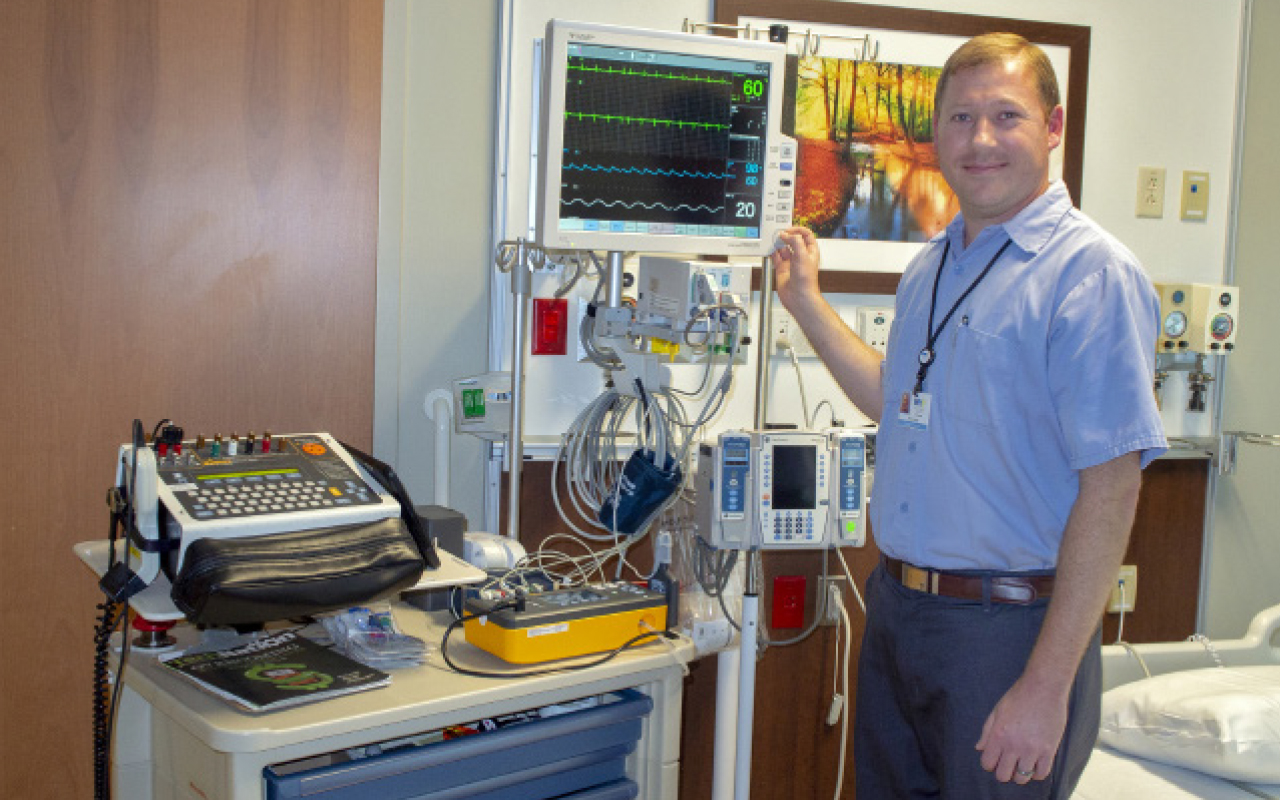 Professional of the Month: Jason Hoeing, CBET – Enjoying the Challenges

Posted By: K. Richard Douglason: January 01, 2019In: Magazine, Professional of the Month, Spotlight

Shelbyville, Indiana is the county seat of Shelby County, which was named after the first governor of Kentucky. The city is located approximately 22 miles southeast of Indianapolis. Serving the health care needs of the people of Shelbyville, and much of southeastern Indiana, is Major Health Partners (MHP) and the MHP Major Hospital in Shelbyville.

Hired to service the heating and cooling needs of the hospital, Jason Hoeing, CBET, learned that servicing medical equipment might have been his calling instead.

“I started working for Major Hospital in 2007. I was hired as an HVAC service tech to help maintain the facilities. This was my first experience in the health care field,” Hoeing says.

“At the time, our facilities and biomed engineering staff worked out of the same shop,” he adds. “Not long after becoming acquainted with my surroundings at Major Hospital, my love for technology and the desire to make a difference kept me asking the biomed ‘Is there anything I can do to help?’ At first, I was given small tasks like helping to locate equipment that was due for service as a trial to see if I liked this sort of work. Just a small taste of being a biomed engineer kept me coming back for more and that’s when I knew I wanted to make a career of it,” Hoeing adds.

Hoeing says that as luck would have it, the hospital system was growing at the time that he realized his aspirations and they allowed him to transition to become a biomed engineer.

“I attended IUPUI, Indiana-University-Purdue University Indianapolis, in their biomedical engineering technology program. I went to school part-time while beginning my career as a biomed engineer, which I feel gave me a huge advantage as I was able to see the equipment and processes discussed in class first hand at work. After graduating from IUPUI, I completed my CBET certification from AAMI and I am grateful to be part of the HTM community,” Hoeing says.

Hoeing has now been a biomedical equipment technician for five years. 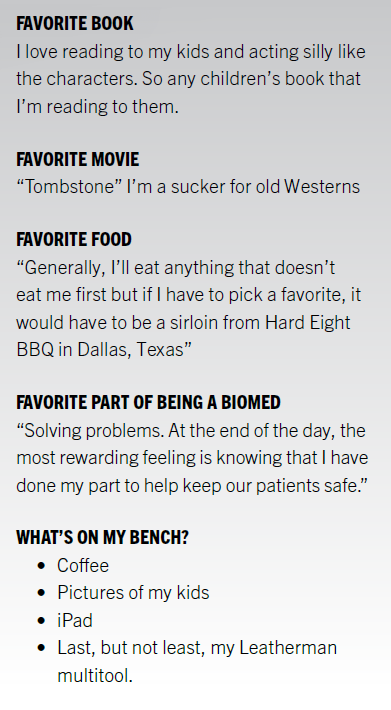 Nothing challenges a biomed quite like learning about all new equipment from a different manufacturer. Throw in the rebuilding of a CMMS database, and things really become interesting.

“In January of 2017, Major Hospital completed the construction of our new facility and successfully moved from our old building to the new one. That being said, there has been no shortage of challenges or special projects. The biggest challenges so far have been learning and becoming an expert on many new types of patient care equipment that were purchased for our new facility,” Hoeing says.

“We completely switched brands of all our patient monitoring equipment – bedside and telemetry – to one that our two-person biomed team was unfamiliar with. Our OR’s were completely redesigned with new lights, booms and communication equipment. It was all a little overwhelming in the first few months of operation, but our small and mighty team faced each new challenge as an opportunity to grow and succeed,” Hoeing adds.

Hoeing says that the most interesting project he has been involved in so far (which is still evolving) is rebuilding the CMMS database.

“Taking an old system, and loads of data, and turning it into a new ‘user friendly’ system that works for the entire team has been a very fun and rewarding experience,” he says.

“At our old facility, the CMMS database was just OK; it served its purpose, but it had been subject to many years of ownership changes and messy upgrades. It was a system that no one liked to use. Since we knew the new facility and new equipment would bring so many new changes to the database, we made the decision to start with a clean slate,” Hoeing says.

He says that they can now use the CMMS as a work order system for biomed and facilities engineering so that anyone in the health care network can submit work orders.

“We also now have a system that we record and then report all our work that helps us stay on task, organized and compliant,” he says.

Asked about an area of specialty, Hoeing makes it clear that he is among the new generation of biomeds who are hybrid IT as well.

“Anything IT, I love computers, networks and interfacing equipment. If I had a second pick for a career field, it would be IT,” he says.

On the home front, Hoeing gets great enjoyment from spending time with his family.

“I have been married to my best friend for three years now and together we have three wonderful kids, two dogs, four cats and a fish named Bob,” he says.

The switch from HVAC to biomed turned out to be the perfect career move.

“I can honestly say that I love what I do. My job provides me with new and interesting challenges every day and, to me, that’s what makes it great,” Hoeing says.

MHP Major Hospital may have a small biomed shop, but with enthusiasm and resourceful thinking, that doesn’t matter. Jason Hoeing welcomes any challenge.