Posted By: K. Richard Douglason: April 01, 2019In: Magazine, Professional of the Month, Spotlight 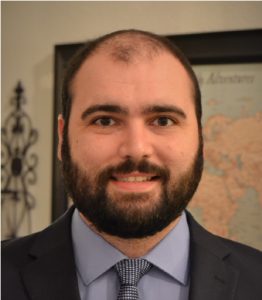 Sometimes, it takes the observation of a family member, committed to their job, to spark an idea for a career path. With a lot of work, in HTM, that career path can lead to a director position.

That career path was in the cards for Joshua Virnoche, MBA, CHTM, CBET, director of clinical engineering at JPS Health Network in Fort Worth, Texas.

“When I was growing up, I had an uncle, Scot Virnoche, who served in the United States Air Force (USAF). Ultimately, he became a biomedical technician. Some of my earliest memories are traveling with my father to pick him up from Sheppard Air Force base on the weekends,” Virnoche remembers.

“As I got older, I struggled with the same thing all people do. I didn’t know what I wanted to do with my life, or what I wanted to be when I grew up. At that time, I had decided that college wasn’t exactly for me, so I enlisted in the Army,” he says.

His father suggested that he look into the BMET program in the military. So, he put that as one of his top choices.

“Unfortunately, when I got to MEPS, the recruiters told me they didn’t have the MOS (military occupation specialty) available for me, but gave me some other options. As I was beginning to work through the paperwork to enlist as an active duty journalist, a master sergeant ran through the area yelling to stop. He found a BMET position for me, but it was as a reservist. Because I wanted to be in this career field, I decided to take the reserve option,” Virnoche says.

And that’s where he started, working as a biomed in the Army Reserve.

“My first civilian job was as a biomedical tech for Renal Ventures Dialysis. From there, I moved to Cook Children’s Medical Center, and held positions as Biomedical Equipment Tech 1, was promoted to a Tech 2, and then to medical imaging,” Virnoche says.

He says that while at Cook Children’s, he completed his bachelor of science and started working on his MBA.

“I decided, at that point, that I was ready to pursue leadership, and began looking to expand there. I was eventually offered a position as a manager of clinical engineering at John Peter Smith (JPS) Hospital, aka Tarrant County Hospital in Fort Worth, Texas. I’ve been employed at JPS for five years and was recently promoted to director, clinical engineering, which is my current position,” Virnoche says.

Building and Growing a Team

Virnoche’s tenure in the field has not been without challenges. Most of those challenges became learning experiences.

“During my time at Cook Children’s, we were in a constant state of construction. I was fortunate enough to take part in that. We built almost one-million additional square feet of in and out patient areas, and the clinical engineering department took lead in installing the vast majority of general medical equipment. I truly believe my involvement and time working on this project molded me and taught me more about the field than I can ever say,” Virnoche says.

He says that the part of his career that he is most proud of, to this point, is his work with his current organization.

“When I arrived, we had six technicians for an academic medical center with 25,000-plus medical devices. We relied heavily on service agreements to maintain equipment, many times on equipment that is easily in-housed,” he says.

“With the support of my vice president, we began to change the way the organization viewed the department. We agreed that for every dollar I could cut from service contracts, is a dollar I could spend on staffing. I immediately began hiring, and spent the entirety of the next year hiring technicians. I had identified the ‘low hanging fruit’ of service contracts to cut, and as I brought people on board, began eliminating them,” Virnoche says.

Ultimately, by the end of that fiscal year, he had achieved double the savings that had been initially projected.

“Fast forward to today, and we have a department of 24. Myself, a supervisor, two database coordinators, three biomedical team leads, one imaging team lead, six biomedical specialists and 10 technicians. My budget is roughly half of what it was when we began this project, and we’ve had two perfect TJC inspections and one perfect CMS inspection,” Virnoche says.

“We handle nearly all medical devices in house, and really only depend on service agreements for lab equipment and imaging equipment. Ideally, over the next few years, we will begin to focus on first call/shared service on those items too,” he adds.

Away from work, Virnoche loves to play video games to unwind after work. He also enjoys baseball and football.

“I have two sons; Jaden is seven and Jack is four. I’ve been married for almost nine years to my wife, Jessica,” he says.

Virnoche says he would describe himself as someone incredibly passionate about biomed.

“My decision to pursue leadership was because I felt like I could affect change in our career field much more from the top than as a technician. I want to be one of the driving factors that allows our field to expand, and for people to begin appreciating how much we really bring to the table,” he says.

As a CE director, he is fiercely loyal to his staff and will go to bat for them any day of the week.

“At the same time, I empower them to make decisions on their own, and ensure they’re in the spotlight when they succeed. I love developing my staff and work on development plans with all of them on an annual basis. I help mentor and guide them so that they can achieve what they want to out of their career,” he says.

“I abide by the Authentic Leadership model, where I garner a level of trust between my staff and me, and they understand that I will always be honest with them and guide them in the best way for themselves and the department,” he adds.

At the same time, he says that he holds them accountable for their actions when they succeed and when they fail.

“I work my very best to make sure my team knows failure happens, and when it does, we will look back, review the failure point, and make adjustments so that it doesn’t happen again,” he says.

“My family is the most important thing in my life, and I try and make sure our staff knows that when they work on medical equipment, they work on it like it will be used on themselves, their friends and their family. Because as a county level 1 trauma center, there is the potential it can, and everyone we help is somebody’s family member. I’ve been guided by that sentiment my entire career, work on it like it’s going to save your family. It’ll rarely steer you wrong,” Virnoche says.

Favorite book:
“To Kill a Mockingbird”
I have a 7th edition print, and it’s one of my favorite possessions. “Peter Pan” is my other favorite book.
Favorite movies:
“Gladiator”
“Bull Durham”
“For Love of the Game”
“A Knights Tale”
“Peter Pan”
“The Secret Life of Walter Mitty”
Favorite food:
Sour candy
Hidden talent:
“Many years ago, I was a pretty good baseball player and pitched in college for two years before enlisting in the Army.”
Favorite part of being a biomed/director?
“I love the people and the relationship building. I enjoy the constant technology change. I really enjoy the constant change management aspect of leadership. You have to kind of mix all the tools in your tool belt to be successful, and then you have to sell your team members on it, to get the buy in. It’s kind of a unique mixture of skillsets.”
What’s on my desk?
A calendar, a notebook and pen, computer (for emails), coffee (a lot of coffee), AAMI’s Cybersecurity Guide for HTM Professionals