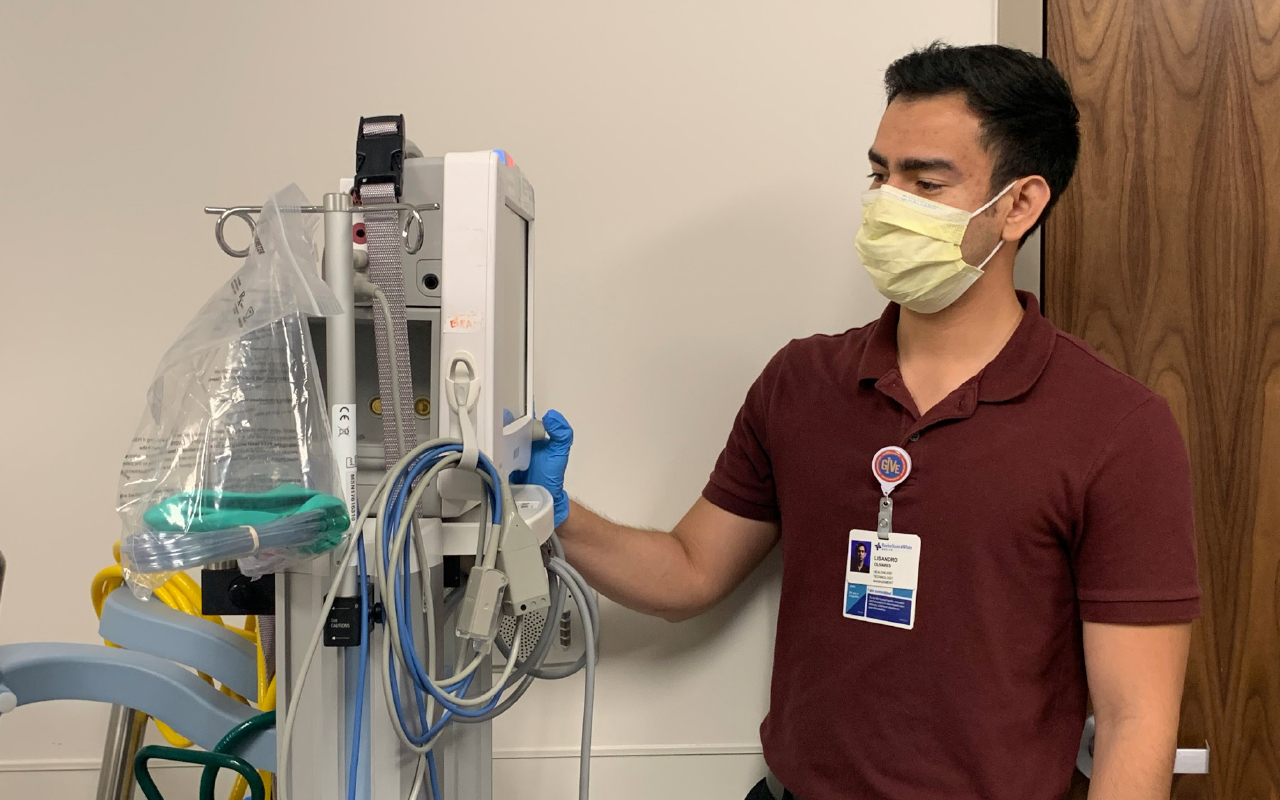 As a biomed, it can be advantageous to be surrounded by a large team of colleagues with different skill sets. There is always something to learn and someone with the knowledge to share useful tips.

That is the case at Baylor Scott & White Health, the largest not-for-profit health care system in Texas, which has an equally large and impressive HTM department. The 52-hospital system has been around for more than 100 years serving patients throughout Texas.

One of those biomeds, who has benefited from the large HTM contingent servicing Baylor Scott & White facilities, is Lisandro D. Olivares, CBET, BMET II.

Olivares always liked the idea of helping other people and that led to discovering the HTM field.

“The goal of my profession has always been to help other people – directly or indirectly. At first, I was aiming for the medical field, but since I’m not much of a people person, I needed to find a way to do this through another path,” he says.

“In my third year of high school, I learned about this profession, started to do some research on it and from my point of view, it perfectly matched my goal and my skills,” Olivares says.

Olivares used his bachelor’s degree as a strong foundation on which to build an HTM career.

“I have a B.S. in biomedical engineering from Universidad La Salle Laguna back in Mexico, where I used to live. No training other than a six-month internship prior to graduating. Everything else has pretty much been on-the-job training,” he says.

Olivares says that after getting his degree, he moved to Dallas and started his biomed career as a dialysis tech for a home dialysis company.

“Worked with them for two years taking care of the dialysis machines and portable reverse osmosis (RO) systems that we installed in patient’s homes – by doing PMs, corrective maintenance, disinfecting and water testing on all units,” he says.

“Then I got the opportunity to interview for a BMET I position at Baylor Scott and White back in February 2019; a month later I received a job offer and accepted it,” Olivares says.

He has since earned his CBET certification and been promoted to BMET II. He works on many types of devices.

“I feel like it’s too early in my career to pick an area of specialty since there are a lot of options,” Olivares says. “I’d rather learn and get hands-on experience on as many devices as possible so that later on, if needed, I’ll be able to make a decision that fits what I like and feel comfortable doing.”

Pitching in with a Positive Attitude

As with any biomed, the more routine daily tasks often morph into special projects and challenges. Olivares says that as experience pushes a biomed to learn more, the ability to rely on colleagues helps mitigate many challenges.

“Since I don’t have a lot of experience in this field, there have been a lot of challenges and a lot of new stuff to learn. Luckily, we have a pretty big team of biomeds which are always ready to help you out and answer any questions you might have,” he says.

He says that of the most memorable, fun and difficult projects that he has been involved with include the opening of the second-floor of a new tower which holds the NICU, nursery and post-partum departments just a month after he started working for Baylor Scott & White.

He helped to tag, inventory and perform initial inspections on all the new equipment.

“This was a challenge since I was brand new to the organization and all the tools used here, including the database. Overall, it was an excellent learning experience and gave me a lot of insight on how the database works,” Olivares says.

He says two other challenging projects were an EPIC integration and the COVID-19 surge.

“Another interesting project was the EPIC integration to the hospital. We had to be present at the hospital a couple of hours after midnight because that was the chosen time to switch servers. We had to install the new configuration to all the EKG carts and make sure the information was transferring over correctly. After we were done with the hospital, we had to go to the off-sites and do the same with their EKG carts. It was a fun night since we had been preparing for it for a week. It all actually went pretty smoothly. All the hard work paid off,” Olivares says.

One big challenge for biomeds everywhere has been the preparation of their facilities for a pandemic.

Olivares says that ramping up and preparing for a surge of patients involved everyone working together.

“It involved a lot of teamwork through all of our hospitals. We also had to rent, perform incoming inspections and tag a lot of equipment. It was very fast paced but a lot of people stood out by their ideas or actions to help others,” he says.

When not hustling to help clinicians prepare for COVID patients, Olivares finds more relaxing things to do in his off-hours.

“Music has always been something I like to spend time on. I’ve learned to play, over the years, a couple of instruments on my own as a hobby – bass, guitar, piano,” he says.

“And recently, since I built my gaming PC, I’ve been spending quite a bit of time playing video games in my free time,” he adds.

Olivares describes his guiding principle as a biomed as “I’ll be glad to help you out if you ever need help.”

The patients and clinicians at Baylor Scott & White can’t ask for more than that from a dedicated HTM professional.