Professional of the Month: Muhammad Hussain

Posted By: TechNation Development Teamon: September 01, 2021In: Magazine, Professional of the Month, Spotlight

From Pakistan to the Lone Star State

One of the biomedical engineers who cut his teeth at the hospital is Muhammad Hussain, who spent seven years maintaining the medical equipment there. Today, Hussain is an HTM professional with Modern Biomedical and Imaging Inc. in Irving, Texas that was recently acquired by The InterMed Group

It was after hearing directly from some experienced biomeds that Hussain decided to make HTM a career.

“I was always good at math in high school, and medical science was the most interesting subject throughout my academic years. Surprisingly, I found it more interesting when I researched HTM and interviewed a few successful professionals prior to pursuing my career in the field of biomedical engineering,” he says. 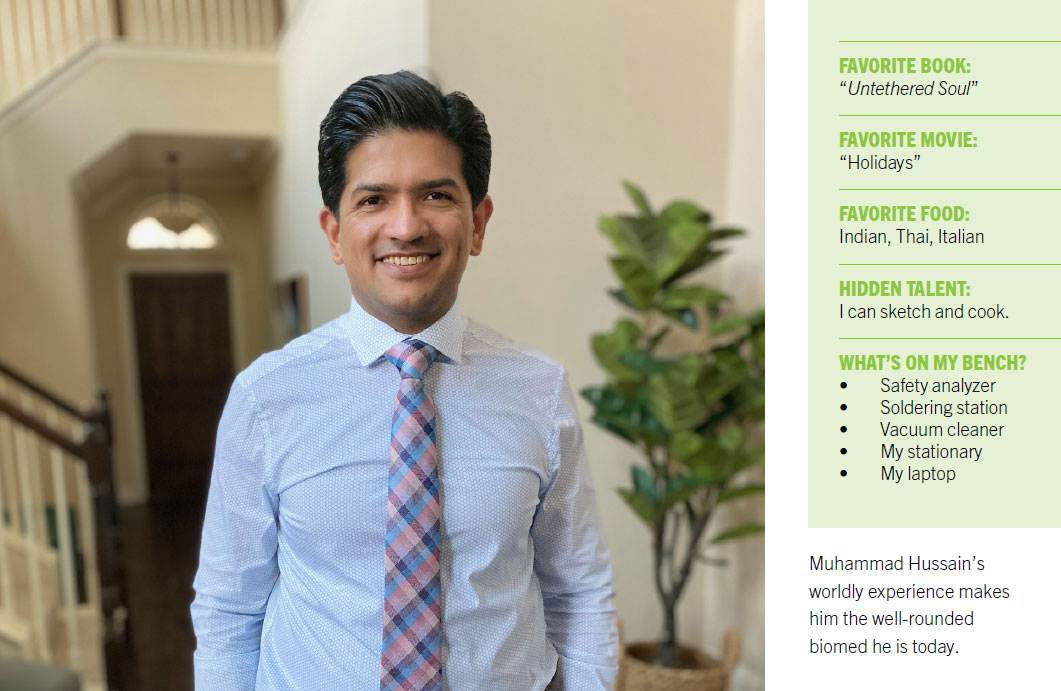 Sikandar Khadbai, who happened to be the manager of the biomedical engineering department at Aga Khan University Hospital Karachi, Pakistan, was an influential figure in Hussain’s HTM journey.

Hussain also says that he was inspired by the application of his knowledge and the impact he was able to make in improving the lives of others.

“Not long after, I began my coursework to become a biomedical engineer. Once I graduated, I too began my career at the Aga Khan University Hospital,” Hussain says.

“All these years, I was working at Aga Khan University Hospital. After immigrating to the U.S., I began working at Modern Biomedical and Imaging Inc., where I currently practice today,” he says.

While still working in Pakistan, Hussain’s area of expertise was advanced laboratory equipment. He also has experience working with high-tech robotic equipment designed for surgical use.

“Currently, however; I am advancing my knowledge and specialization in other areas such as radiology, surgical and support equipment,” he says.

“In my professional career, I started as a trainee and worked under professional engineers for a year before I became a biomedical engineer in 2011. Gradually, I gained hands-on experience with a variety of advanced technological equipment and attended manufacturer training in different parts of the world,” he says.

As is the case with most experienced biomeds, Hussain has faced some challenges along the way.

“The most challenging part for most biomeds in this profession is a lack of manufacturer support, which lengthens the downtime and eventually effects patient care,” he says.

Hussain says he vividly recalls working on a project for a hospital in Pakistan when a piece of equipment was being installed for the first time outside of North America. He said that the manufacturer was hesitant to provide service training.

“At the same time, they seemed keen on negotiating an after-warranty service contract. Surprisingly, they had no local support there yet. Eventually they agreed to provide the service training and I got trained by them,” he recalls.

He says that he traveled to the U.S. for the training and during that time, the manufacturer offered him a job and suggested he go back to Pakistan and work at AKUH hospital as a vendor/employee. Hussain was surprised at the offer. He questioned the ethics of such a practice. He also adds his voice to the right to repair movement.

“This probably was only my experience and is not a common practice for most for-profit companies/manufacturers. However, there are other areas in this business that need attention, such as local support system and tech support. Gratefully, there are now some active forums and common e-groups out there to support other technicians remotely, but still, it is difficult in current times to get access to lots of service manuals from very major manufacturers,” Hussain says.

When not on the job, Hussain enjoys building and fixing things around the house.

“I also volunteer at our mosque regularly on Wednesdays and help repair a variety of equipment/needs. In my spare time, I love to bike outside, watch comedies, and I have become hooked on murder mystery podcasts,” he says.

“My wife and I recently got married and we live close to her family which has been comforting. Most of my immediate family members are all in back home in Pakistan,” Hussain says.

Hussain confides his biggest reward is “my client’s smile and satisfaction.” He reflects that it is rewarding “when I can fix their equipment and make them feel taken care of.”

“I love what I do, and I take full pride in my profession. I go home daily content and satisfied. I carry out routine inspections and preventive maintenance to ensure a safe environment around patients and medical workers. Not just that, but my daily activities revolve around patient care; knowing that every action tends to make a huge difference here and collectively; it can make this world a better place,” Hussain says.

He says that integrity is the most important ingredient of the profession. “That makes you a better biomed, besides all the training and technical expertise that comes with time and personal experience. It is something no one can teach you but you yourself. I still remember my mentors’ words to me; ‘Consider that patient yourself to who this piece of medical device will be used on when you inspect or perform maintenance on it. So, how would you inspect it or maintain it?’ ” Hussain recalls.

With that mindset, patients in Texas can be thankful for a biomed who was first trained thousands of miles away.