Posted By: K. Richard Douglason: February 01, 2018In: Magazine, Professional of the Month, Spotlight 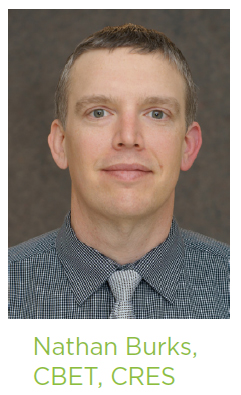 Heading south from Detroit, or west from Cleveland, you enter the city of Toledo, Ohio. A major provider of health care services in the area is the University of Toledo Medical Center (UTMC). The medical center was established in 1964 as a teaching hospital.

Among the medical center’s HTM staff is Nathan Burks, CBET, CRES, who is biomed team leader in the biomedical engineering department. Burks has proven that if you set your sights on something, you can achieve it.

“Prior to being a biomed, I repaired electronics and built custom guitar amps on the side. I went back to school to fill in my electronics knowledge and found that biomed was a practical and secure field to be in, so I enrolled in the program at Owens Community College. When I began my internship, I knew I made the right choice. The variety of work and knowledge necessary for the job was a perfect fit,” he says.

Burks says that one of the best biomed training programs is right there in Toledo.

“I attended Owens Community College from 2005 to 2007 and received an associate’s in biomed. Part of the degree is a nine-month unpaid internship. I was lucky to intern close to my home at the University of Toledo Medical Center,” he says.

“I began my career in Tiffin, Ohio as a BMET I with Aramark CTS. An opportunity opened closer to home at the University of Toledo Medical Center (the site of my internship), where I accepted a BMET I position. I have been promoted twice since being here; BMET II and biomed team lead,” he adds.

When an older piece of equipment gets the job done, its up to the biomed to know how to maintain it. Burks learned that patience and attention to detail would have to make up for the lack of a mentor on this particular job.

“We have a nearly 30-year-old nuclear camera that our NucMed department loves for certain studies. Recently, a couple of photomultiplier tubes wouldn’t peak and needed to be replaced. I pulled one of the suspect tubes only to find that the coupling grease was deteriorated and all of the tubes needed to be recoupled with brand new grease,” Burks says.

“I removed each tube, cleaned them, cleaned the crystal, and recoupled the tubes. This was the first time I had ever recoupled a tube, let alone many tubes. After identifying and replacing suspect tubes and repairing other mechanical connection issues, the camera tuning went smoothly and it is still working perfectly months later,” he explains. 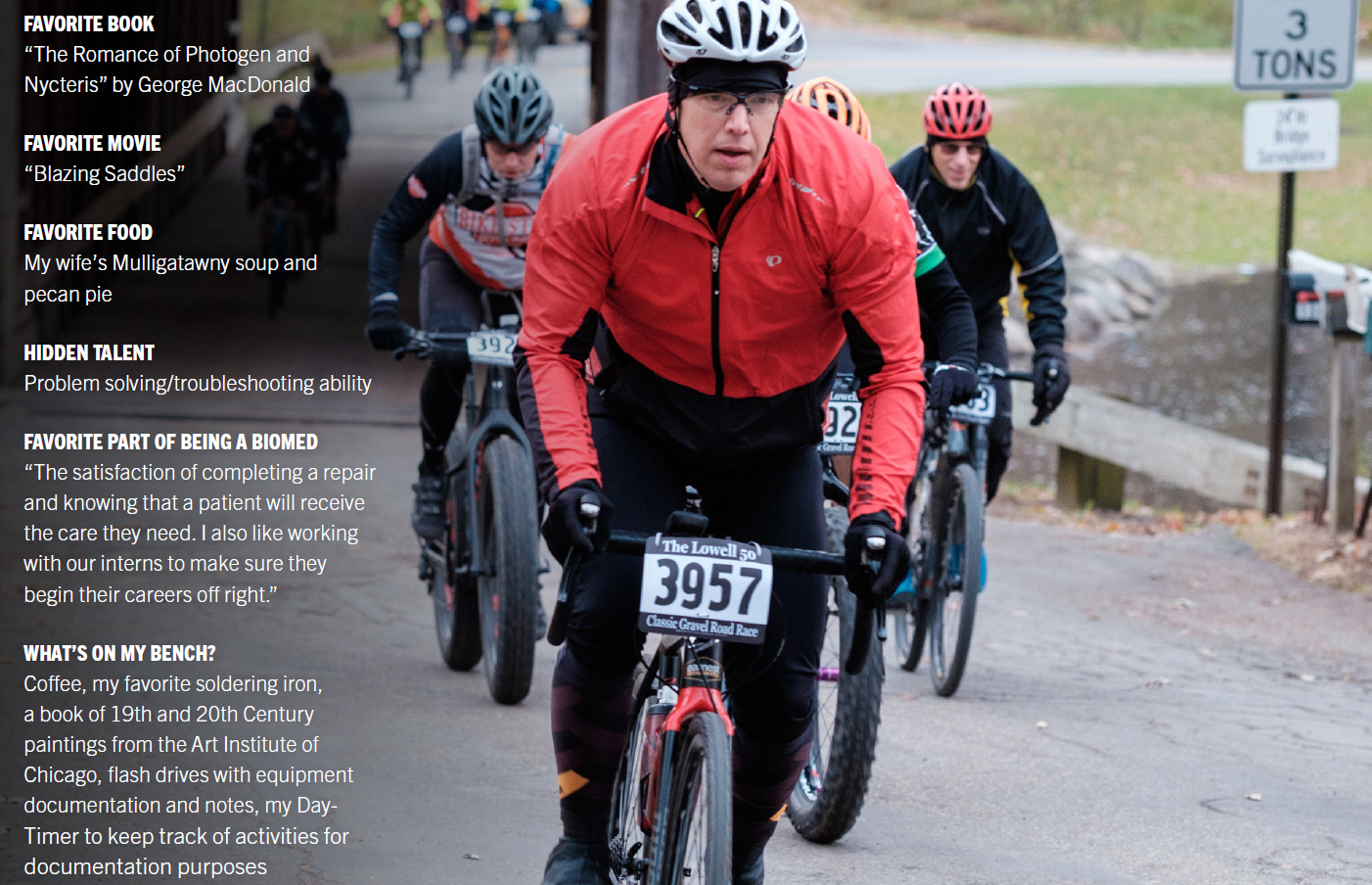 In his off-time, Burks is all about staying fit and spending time on two wheels.

“I used to weigh over 300 pounds,” he says. “At some point in 2008, I decided it was time to take my health seriously and this meant getting active and losing weight. I lost the first 50 pounds working out on an elliptical nearly every day. I hit a plateau and had to change my eating habits to lose the next 75 pounds. My weight still fluctuates plus or minus 10 pounds, but I’ve kept the weight off for about seven years now by staying active and watching what I eat.”

Burks has had many hobbies over the years, which have included playing guitar, tinkering with computers, photography and others.

“My current hobby is cycling and trying to stay fit in general. I started out road cycling and commuting the short distance I have to work. I picked up a fat bike to commute in the winter and started riding mountain bike trails as well,” he says.

“This past year, I started cycling on gravel roads (gravel grinding). Gravel roads are great because they can take you to places you would otherwise not visit and there are fewer cars to deal with. I’ve ridden in several races and challenges, including Iceman Cometh, Funk Bottoms Gravel Grinder, Michigan Mountain Mayhem, Lowell 50 Gravel Grinder, Little Miami Dirty Dozen, Pittsburgh Dirty Dozen, and many others,” Burks says.

“Me and a few guys like to create routes and abuse ourselves whenever we have time free. We completed a 213 mile-in-a-day road adventure this past summer, as well as many self-supported gravel grinders on hilly roads near Loudonville, Ohio,” he adds.

On the homefront, Burks spends time with his family and gets out in nature.

“My wife and I have been married 18 years and we have a seven-year-old son. My wife is a runner and recently completed her first half marathon. My son loves to play Minecraft and harass our cats. The Toledo Metroparks are awesome, so you will find us at one of them at least once a week,” Burks says.

For his efforts on the job, he won the Shining Star, an award given to outstanding UTMC employees.

There’s little doubt why Burks was nominated for the award and to be featured in TechNation; he proves that when you set your sights on something, you can achieve it.