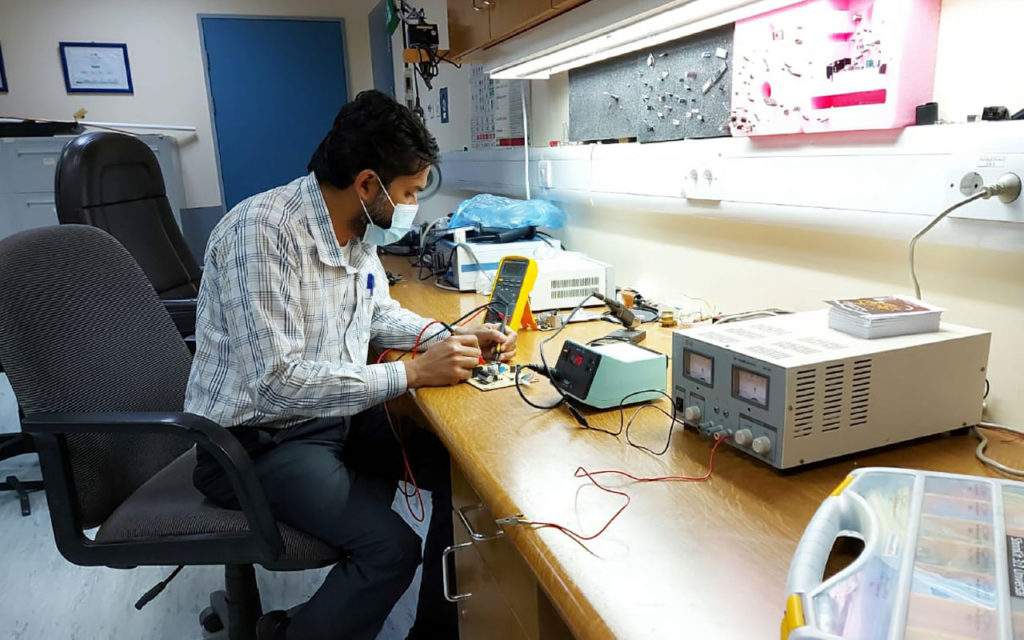 The city of Riyadh is the capital of Saudi Arabia. The city sits in the center of the country and is a financial hub in one of the world’s wealthiest nations.

Travelers to Riyadh can visit the Edge of the World, an other-worldly wall of steep cliffs northwest of the city that emerge from the desert floor and allow hikers to see for miles. It is not unusual to see camels and camel herders on the desert floor below.

In the city, tourists can visit the Masmak Fort, a clay and mudbrick historical site dating back to 1289 A.D. There is also the Deerah Souq, a shopping area with quaint shops that sell souvenirs, gold, silver, antiques and traditional clothing. More modern attractions include the Kingdom Centre Tower and Al Nakheel Mall.

Naveed Khan, a biomedical engineer at SGH-Riyadh, works as an assistant facility/operations manager.

“I applied for an internship at Siemens in Pakistan where I had been placed in the medical engineering division. That was the beginning; then I continued my career in HTM/ biomed,” Khan says.

The countries of Pakistan and Saudi Arabia are separated by water. They sit on opposite sides of the Gulf of Oman. “I spent more than a year as an internee. Then, I got different training at different levels of my career. I did my internship with Siemens’ medical engineering division, where I was working under senior engineers and assisting them as well,” Khan says.

After completing his internship at Siemens, Khan worked there as a technical assistant. He then worked at the local Mehdi A. Manji Diagnostics Center in Pakistan, where he worked on imaging equipment.

The work with imaging equipment has remained an area of specialty to this day.

“Although I have been working in different areas of medical equipment as an in-house engineer, I think I am still doing good work in radiology,” Khan says.

While Khan’s career path has added more responsibilities, he says that the HTM role in the countries he has worked in are similar.

“Biomed in Pakistan and Saudi Arabia is the same, but the nature of my job is different. In Pakistan, I was working as a field engineer, and in Saudi Arabia, I am an in-house engineer,” he says.

He says that in his role as assistant facility/operations manager, he is responsible for taking care of the daily operations of the hospital such as biomedical engineering issues, general maintenance, HVAC and works with the purchasing committee for medical equipment. 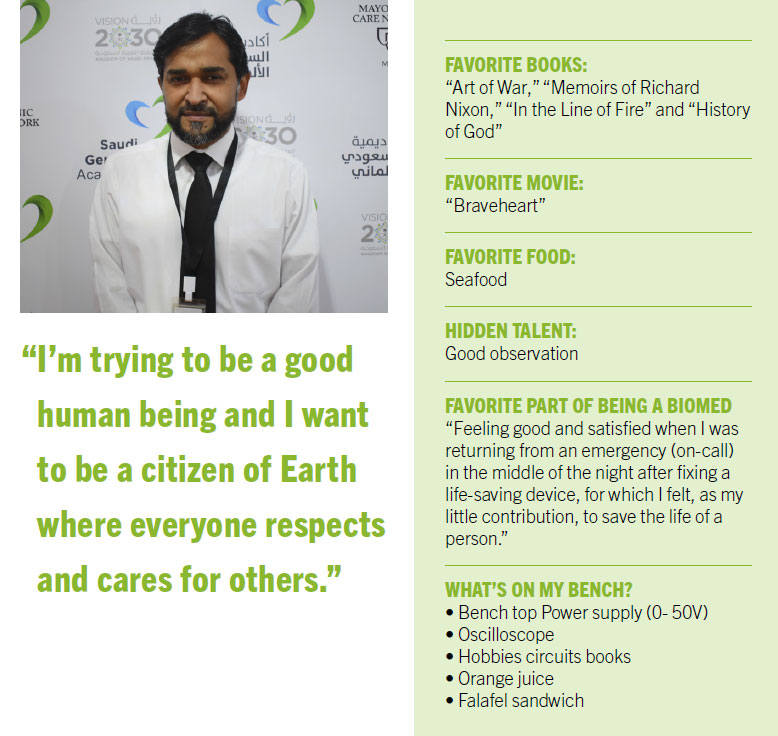 Charting Workflows and other Projects

Khan’s role at his hospital has included routine responsibilities and special projects.

“As a special project, development of policy and procedures for the biomedical engineering department took a lot of time,” he says.

That effort paid off. He says that recently, the Saudi Food and Drug Authority survey found that the SGH-Riyadh’s biomedical engineering policy and procedures were very comprehensive and ranked best among regional hospitals.

Another project was participation in the development of a CMM program (biomedical engineering module) in-house development with the WIPRO team.

“My responsibility as a biomedical engineer was to make a workflow chart and maps; from purchase request until finalizing of the order and entry of medical equipment in organization until retirement – warranty, services PPM, corrective maintenance, safety test calibration, classification of device – all these steps converted into the program by the WIPRO team and tested on different levels till ‘go-live.’ This program is still running in the SGH-Riyadh and SGH-Madinah branches,” Khan says.

Another memorable project was the installation of a linear accelerator at the Karachi Institute of Radiotherapy and Nuclear Medicine Cancer Hospital in Karachi.

“One beautiful experience; I had worked with the most experienced engineers and pioneers of Siemens medical engineering. I was selected as best employee in that project for my efforts,” Khan remembers.

When not working, Khan says that he enjoys reading books and attending conferences and seminars to enhance his knowledge.

“Most important; meeting professional people to learn from them,” he says.

He also enjoys spending time with his family.

Khan’s personal goals as an HTM professional extend beyond his work.

“I’m trying to be a good human being, and I want to be a citizen of Earth where everyone respects and cares for others,” he says.

That attitude will continue to benefit patients and clinicians in Riyadh as Khan addresses a host of responsibilities.