Posted By: K. Richard Douglason: November 01, 2017In: Magazine, Professional of the Month, Spotlight 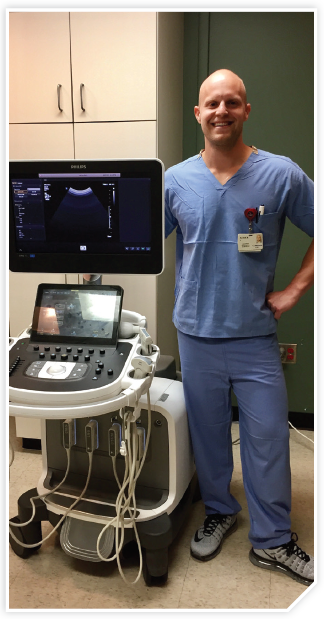 Growing up in Michigan, Patrick Shepherd, CBET, was one of those kids who wanted to know what made anything electronic work. “I can remember, many times [when] I received a new toy, I found myself disassembling it after only a couple weeks; I just had to know what was inside of that walkie-talkie and how it worked,” he recalls.

“This wasn’t limited to just my toys either; if one of my mother’s kitchen appliances stopped working, you better believe I was right there with a screwdriver. My great uncle was a radio operator/electrician for the army in World War II; he was the one who first introduced me to electronics. From that point on I was hooked. In grade school, I don’t think I completed one science project that did not involve an electrical experiment,” Shepherd says.

“In my junior and senior years of high school I attended a residential and industrial electrical vocational program,” he adds.

That early interest in all things electronic set the stage for things to come. A friend told Shepherd about the biomed profession. He discovered that Schoolcraft College in Livonia, Michigan offered a biomed program and he enrolled for the fall semester.

“That initial goal changed when completing an internship at a local hospital, I was offered a full time position as a biomed,” Shepherd adds. That position was in the clinical engineering department at McLaren Flint; a 378-bed teaching facility located in Flint, Michigan.

“While I was in school, I had been working full time at a minimum-wage job and the full-time biomed position sounded very enticing, so much in fact, that I decided to forgo the four-year degree and accepted the position. I have often looked back and wondered if I should have continued on to be an engineer, designing the very things that I work on every day now, but ultimately I am happy I selected the career path that I did,” he says.

Starting out in his new position as a BMET, Shepherd says that his job duties were similar to most entry level BMETs, involving the PM and repair of general medical equipment such as IV pumps, SCDs, suction units, beds and PT exercise equipment. His main job was hospital bed repair. 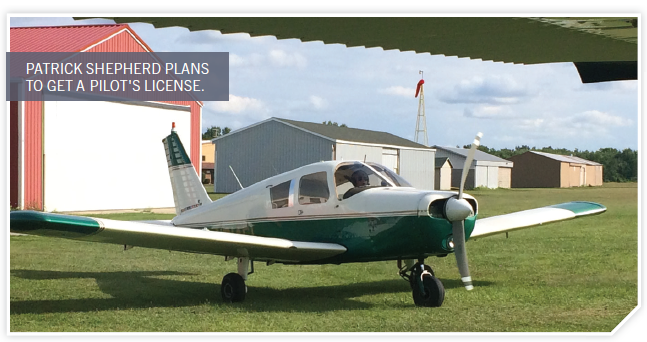 Shepherd specializes in diagnostic ultrasound and enjoys working on the systems. He loves the technology behind how they work. Related to this is an effort he has made to control costs.

“One of the greatest challenges I have encountered associated to the ultrasound world is attempting to eliminate the high costs associated with TEE transducers. This is a particularly difficult endeavor because these devices change many hands throughout a day, they are extremely fragile, the staff using them tends to have a higher turnover rate making education difficult and there is little to no accountability for broken transducers,” Shepherd says.

He says that he has been able to make some good progress the past year or so.

“I have been able to reduce much of the needed repairs by working closely with the department heads where the TEE probes are being used. We have implemented a sign-out and inspection process that follows each probe through its transitions from storage, to procedure, to disinfection and back to storage,” Shepherd adds.

“We have mandated the use of bite guards for every procedure and re-educated the staff on proper handling practices. I have even gone as far as attaching impact indicating labels on the connectors of the transducers that will turn red if the probe is mishandled or dropped,” he adds.

Recently, Shepherd has also been involved in the implementation of new IV pumps hospital-wide. Since the administration wanted to use a newly installed RTLS system to track the new infusion pumps, a challenge arose because the IR/RF tracking badges would not fit anywhere on the pumps.

“The badges required a flat surface to mount to and furthermore the pumps had to be able to stack on top of each other and be able to slide into a charging station,” Shepherd explains. “I designed a mounting bracket that was made of strong plastic (PETG) that could conform to the rounded edges of the pump with a little heat, yet it still provided a flat surface to mount the RTLS tag and was thin enough that the pump could still be inserted into a charging station,” he adds.

It’s not all work for Shepherd though. His free time finds him outdoors enjoying all that Michigan has to offer.

“In my free time I am an adrenaline junkie and a true outdoorsman. In the summers I enjoy roller coasters, riding motorcycles on and off road, going to the sand dunes along Lake Michigan and probably anything else you can think of that involves speed. I even set a goal for myself to get my pilots license this summer and am planning on completing that goal this fall,” Shepherd says.

The fall also brings with it one of his other passions. 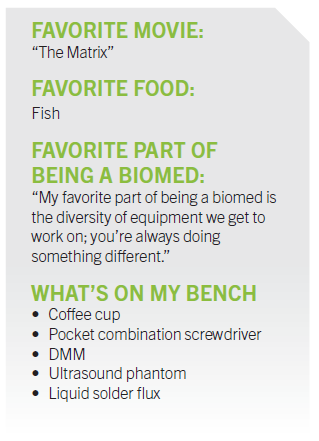 “I am an avid hunter, whether it is waterfowl, upland game or deer,” he adds.

“One day, I would like to travel out west for a mule deer or elk hunt, but for now I stay in Michigan. I am also an avid fisherman and I was recently introduced to fly fishing, which is fast becoming my favorite method of casting a line. This fall, I am really looking forward to the salmon season,” Shepherd says.

Shepherd says that during the winter months, he can be still be found outside.

“I enjoy skiing and snowboarding, ice fishing and snowmobiling. I also travel quite a bit and like a good adventure whether it be camping in northern Michigan or riding a scooter through the back roads of Jamaica. I try to visit another new country every year, next year my girlfriend and I have a backpacking trip across southern Europe planned,” he adds.

On the job, Shepherd says that the part about being in the biomed profession that he enjoys the most is that he is able to help people in need every day.

“It is that sense of making someone’s day better that drives me to come to work every day and it is why this job is so rewarding,” he says.